The Adaptec ASR series RAID/HBA cards listed in this thread are known to be compatible with Unraid, FreeNAS, Windows, Linux, and more.

Special thanks to @riggi for his knowledge and encouragement to give these HBAs a try.

You’ve probably seen people mod their LSI cards and strap a little fan to them. I don’t think it’s necessary to do it with LSI cards, as I’ve never had one throw an overheat alarm. However, it’s definitely necessary with these Adaptec cards. For example, my ASR-71605 alarmed within 5 minutes of booting the system, with completely idle drives. These cards are designed for use with servers with forced airflow. In most builds that we do here, there won’t be enough.

Adaptec even specifies a minimum airflow amount, typically 200 LFM (Linear ft/minute). Generally, a 40mm fan with a few zip ties will work fine, or you can get fancy with a 3D printer. Options like this can cool multiple cards while providing enough airflow.

As an additional precaution, I also repasted the heatsink with Gelid GC Extreme. The stock TIM was essentially dried cement, so I figured that repasting surely wouldn’t hurt.

If you’re used to LSI SAS HBAs, these are a little different. The Adaptec cards do not require re-flashing to switch from IR to IT mode (or vice versa). In the card’s BIOS, you can simply switch it to HBA mode (IT).

In addition, the Adaptec cards (at least the ones covered here) favor the use of SFF-8643 for internal connections and SFF-8644 for external connections. These connectors are significantly smaller than SFF-8087 and SFF-8088, but are generally more expensive. Despite the increased cost, the ASR-71605 is by far the cheapest way to get 16 internal ports. Even the ASR-72405 is more affordable than LSI -16i cards.

Adaptec cards also often come with a 1GB DRAM cache attached via a small daughterboard at the rear of the card. There are also battery backup (BBU) units available. Both of these options favor the RAID mode of the card, so if you’re using the card as a HBA they aren’t helpful. If your card comes with a DRAM cache and you want to use it as an HBA, you can leave it installed on the card, or uninstall it by removing the 2 standoff screws.

I’ve purchased two of the more affordable cards for review and use, they are covered below. I haven’t needed to update the firmware on either card, but firmware downloads are available if you get one that’s out of date.

My ASR-71605 came with both high and low profile brackets. 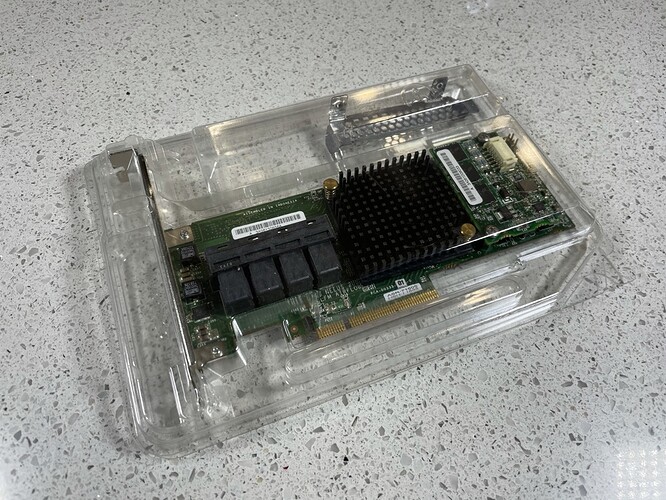 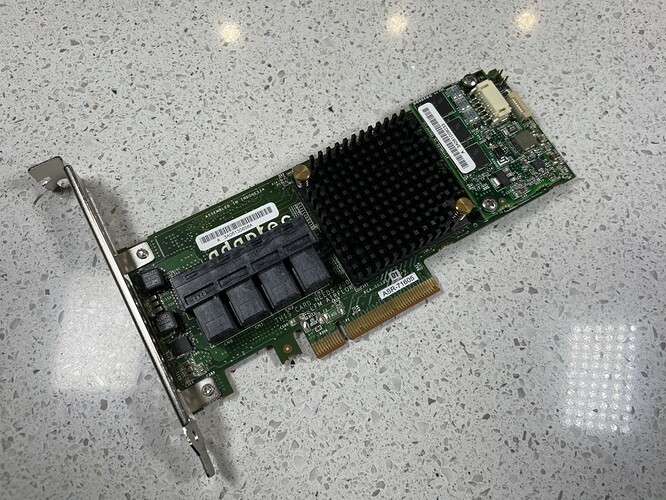 Screen printed on the card: “This card needs 200 LFM airflow” 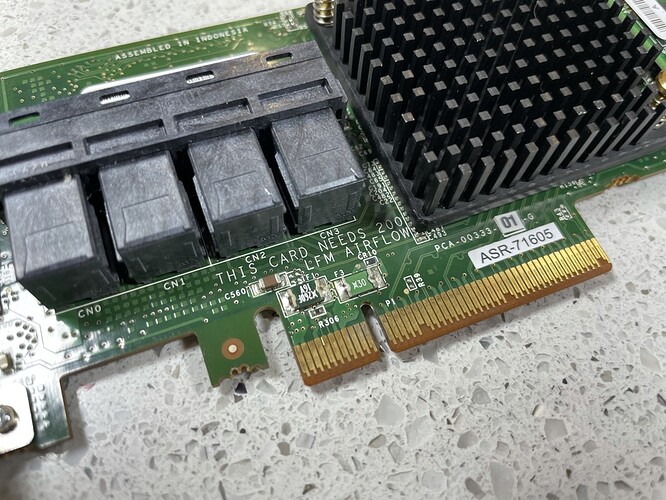 At the end of the card is the 1GB cache daughterboard. 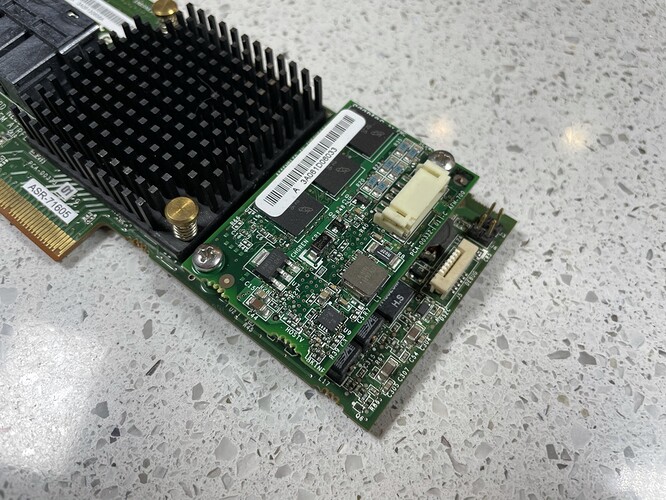 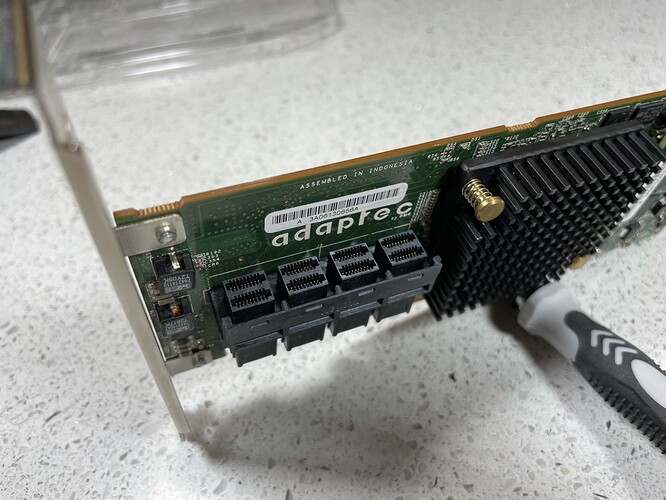 Not much to see on the back side of the card. The SAS address is printed on a sticker in case you need it. 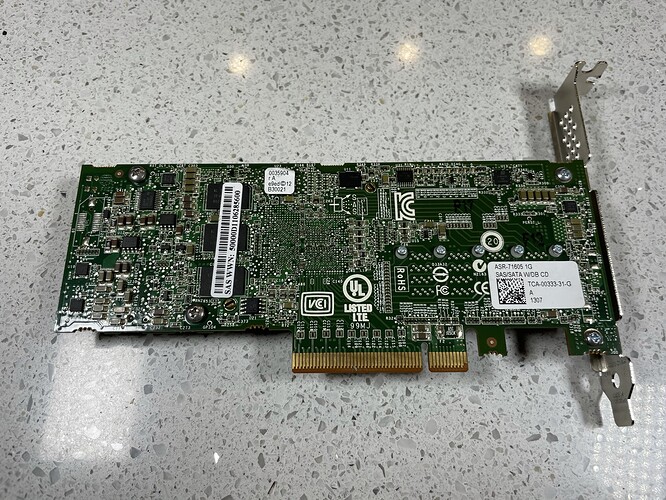 The 1GB cache is attached via 2 #1 Philips screws. 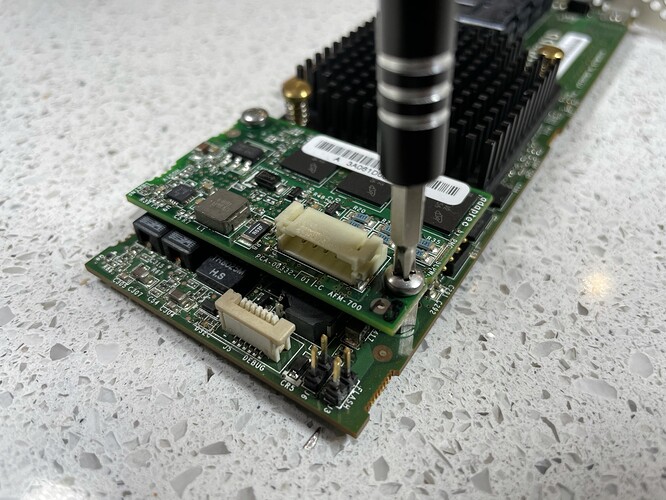 Gently lift and wiggle, and the cache is easily removed. 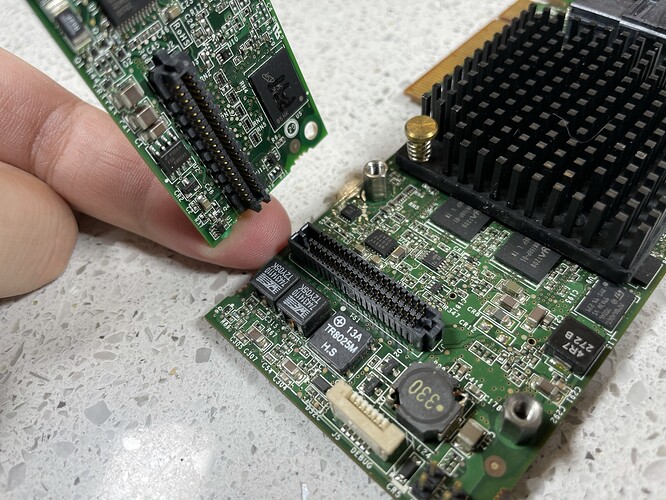 Replace the #1 screws back into the standoffs for later use. 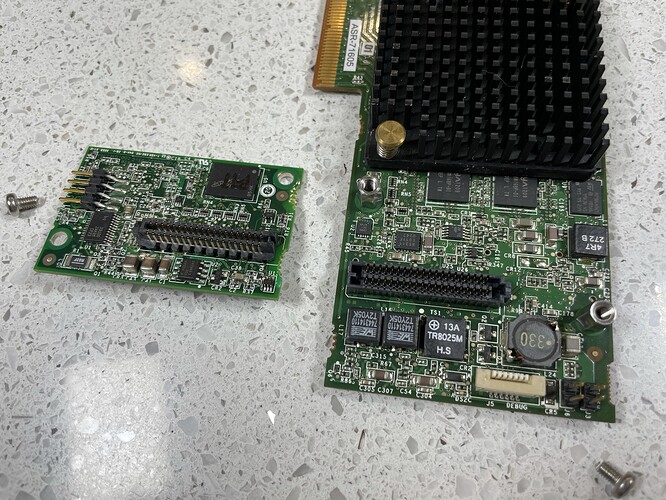 Adaptec’s naming scheme is simple, but not very intuitive. The first digit is the series of card, the second is the number of internal lanes, and the third is the number of external lanes. So for the above examples, the [7][16][0]5 is 7 series/SAS2, 16 lane internal. The [8][4][0]5 is 8 series/SAS3, 4 lane internal. There are more naming conventions, but these are the most important for our uses.

Below are some cable options in various configurations.

excellent, will be great to replace a bunch of cheap-o SATA controllers with one of these. thanks!

I got an ASR-71605E a while back and I don’t know what the E means but it did not come with the 1 GB add on card. It does claim to have 256 MB cache though. It’s a great 16 port card (with four breakout cables of course) but I’m not sure I understand it fully. It seems to remember its previous configuration and screams an alarm that the RAID array is missing until you disable the alarm in the card bios. Since then, smooth sailing. It does have status LEDs and they do do the Knight Rider car thing if the case has a window. So… that’s a bonus.

The “E” version doesn’t have the daughterboard connecter for the 1gb ram module, doesn’t support raid 50, or, 60 and doesn’t support the battery module. None of which matters for JBOD systems

More info from an old thread

Put my money where my mouth is and put the ASR-71605 into “production” today.