I’ve used ServerBuilds guides and sought out help on this forum and from good people on the associated Discord for a while now doing things like building my first Node 804 based NK4 with help from the NK4 guide that I was very happy with.

However I knew that a few things were going to come to fruition sooner rather than later:

I came to the conclusion that the best way to achieve all my goals was to use a Rosewill L4500 case as a DAS and to house a micro-ITX based OTiS build as a quicksync box in the rear of the case while borrowing the PCIe slot on the OTiS motherboard using a powered mining riser to provide power for the HP Expander giving me the DAS to NAS connection.

First I needed to build out the OTiS. I went with these parts:

I actually had this sitting out in a bare-bones, caseless configuration on top of my PC case for about 2 months before embarking on the hybrid project.

Using the Plex metadata transfer guides here and here I was able to fully move my Plex data over flawlessly.

(Full disclosure: I decided to “Dockerize” my Plex install on Ubuntu so I used this guide and for Plex specific guidance followed up with this mini guide. Dockerizing is absolutely not required; it was just a personal preference. I keep Plex automatically up-to-date using Watchtower in a Docker container.)

The next step was getting this Quicksync OTiS into a case alongside the DAS.

The first thing I did when unboxing the L4500 was remove the top and replace the rear fans with Arctic P8 PWM PST 80mm case fans to cut down a little bit on noise. 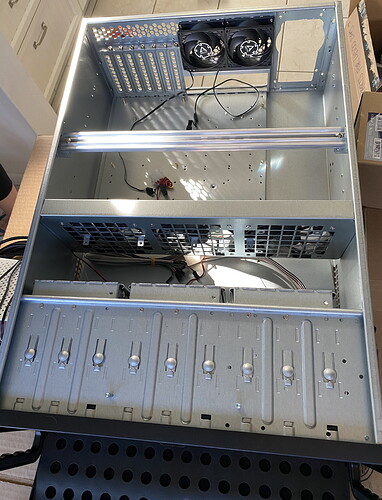 Then I removed the fan wall to give me more room to work but also with the intention of reversing it on re-install (detailed by JDM here). Once the fan wall was removed I swapped out the stock fans and added in 3x ARCTIC P12 PWM PST 120mm fans. I also completely removed the 3x 120mm case fans that came pre-installed in the front of the case. 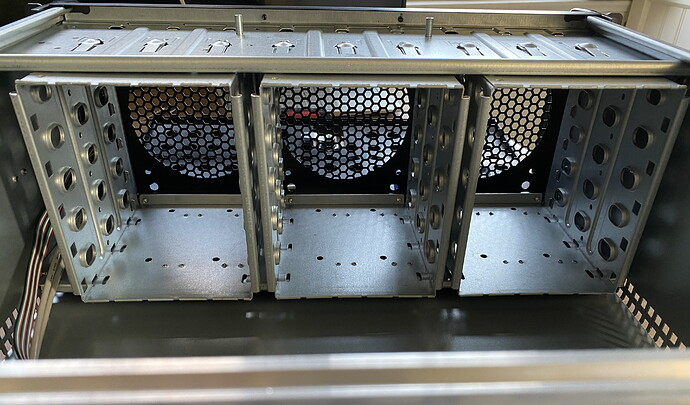 Now to mount all my HDDs. Again with the classic Taco derp moves, I initially sledded up my first 5 HDDs and inserted them into the cage upside down which only let me do 4 per cage. Upon realizing my mistake I flipped them to the correct orientation [insert Picard facepalm pic here] and was back in business with 5 per cage.

With the L4500 it comes with screws and instructions to tighten screws securing the sleds to the HDDs after they’ve been inserted inside the cages. But I chose to ignore that instruction and just leave the sleds attached to the HDDs via the plastic pegs alone. Doing so allows me to work on drive swaps later with much more ease so I don’t have to remove the entire cage to swap out single drives, etc.

With the drives installed in the cages I went to work installing the PSU and OTiS. I used a piece of paper and a mechanical pencil on the bottom of the motherboard to map out the stand off locations so I could use it as a template to adjust the stand offs in the case. Then I secured the motherboard followed by the PSU. 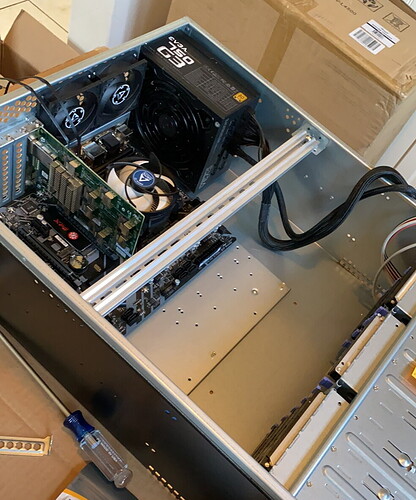 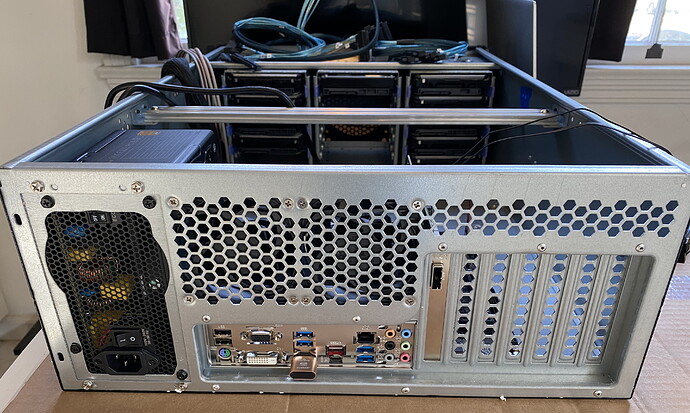 74029×2416 2.07 MB
(View from the back with IO shield and dummy HDMI plug in place for improved quicksync OTiS reliability)

Time to start cabling up!

53024×4032 3.37 MB
I used 3x Mini SAS Cable with SATA Power, SFF-8087 to SFF-8482 Cable to connect my mixture of SAS and SATA drives to the HP Expander. (I’ll eventually need a 4th one when I fill the cages out to capacity at 15) These cables are great because they are compatible with both types of drives. You hook up SATA power to the back of the drive connectors.

Once the data cables were connected I started on the SATA power connections. I used 3x of these [modded] [SATA cables].
There are much cleaner versions of what I did. People either make their own custom SATA power cables like @DoItMyselfToo_US did on his beautiful 20 bay DAS build or they pull the above linked cables and connectors apart to reconfigure for perfectly spaced cable connectors. I just went for convenience over clean looks so I did not mod the cables beyond just pulling the fifth wire.

Now that the HDDs where wired up I needed to give some power to my fans. I could have connected them to the fan headers on the motherboard (and maybe that is still in the cards) but since the motherboard is not technically associated with the HDDs as they are Unraid drives, any fan speed adjustments based on heat would have been arbitrary in relation to the HDDs so I decided to stick to an Arctic fan hub and let the fans spin at 100% full time while connected to a spare SATA power connector (from one of the EVGA stock SATA cables before the modded Cable Matters SATA extension)

Then I used adhesive zip tie mounts and zip-ties to help secure cables in the case to keep them out of the way of various fans/flow paths and to keep cables in a configuration that they lay correctly underneath the fan wall. I even zip-tied the rear fan cables to the cross beam support to keep them from laying on the motherboard and/or interfering with the cpu heat sink fan.

Now that everything was connected it was time to re-install the fan wall.
I mounted the fans so that they were in a push configuration when the fan wall is flipped. Then the fanwall went in. Angle it a little diagonally to get it into the case and then adjust once under the upper lips of the case to mount.

The front keyed swivel door was then removed as I just don’t need it and removing it improves airflow. Also helps compensate for me removing the front pull fans.

At this point the top of the case was replaced and the DAS/OTiS/Quicksync Hybrid build was complete.

Placed the DAS under my NAS, connected the HP Expander in the DAS to the LSI 9207-8e in the NAS using a SFF-8088 To SFF-8088 Mini SAS cable, reconnected the ethernet cable to put the OTiS back on the network and Bob’s your uncle! 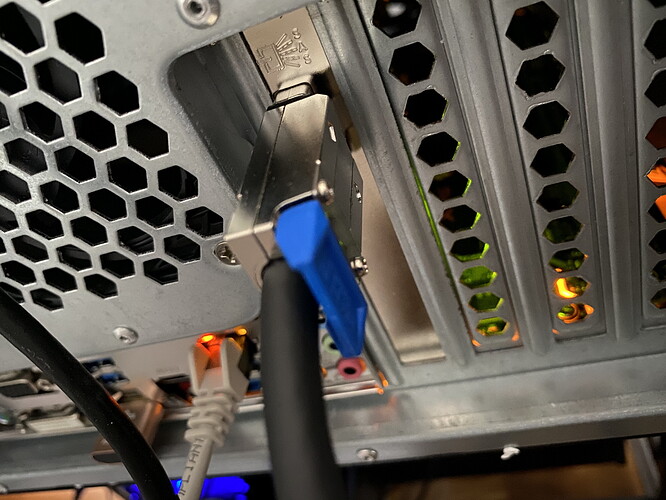 Eventually this will go in to a rack but until then this will work just fine.

EDIT 1: WORD OF CAUTION - In this configuration if I ever need to shutdown or even just restart the OTiS I need to first stop the array on my Unraid NAS otherwise the HDDs will start to error. If you forget to stop the array first or some other unforeseen issue has your OTiS lose power before you’ve had a chance to stop your array then rebooting Unraid will clear the errors you will likely get as a result. Thanks @emonster for bringing this to my attention.

An alternative to this would be to take the expander off of the PCIe slot on the motherboard and place it on a powered riser. PSU power does not get interrupted during reboots.

EDIT 2: BUILD UPDATE
I decided to go ahead with the alternative route and move the HP expander off of the PCIe slot on the motherboard since power there does cycle on a reboot (bad for my purposes) and on to a cheap 6pin mining riser to give it constant power (good for my purposes). I still need to take precations when powering down completely (which i rarely if ever do) but merely restarting the OTiS should no longer bounce my drives off the array.

This is really cool and makes me want to build something similar with my 2nd rosewill.