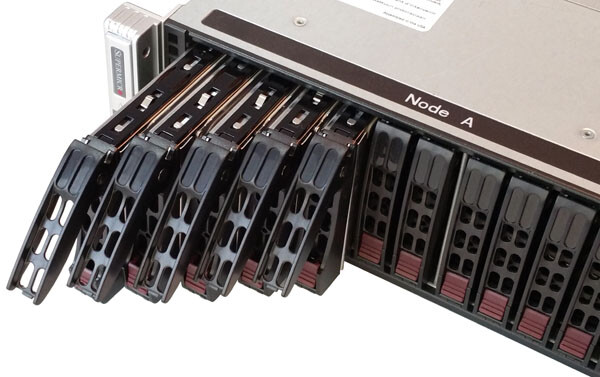 Hey everyone, this will be a quick overview of how I use HDDs with multiple cache pools. A few notes before we begin:

Literally any HDD will work for bulk file ingest, even standard consumer ones. I use 1TB WD Blues for Server 1, because that’s what I had handy and that server is SATA only. I don’t store anything important there, period.

Another option is cheap, small, but fast 2.5" SAS 10k/15k RPM drives. I encouraged BitDeals to put up a few 2-packs of 300GB to 1.8TB drives. These are great for use in single drive, BTRFS RAID0 (stripe) or RAID1 (mirror) depending on what you want to use them for. Many people have been using them in RAID0 for an unpack directory, as to not thrash their main SSD.

I have a lot of hard drives in this server. I spin down drives when not in use to save power. Honestly the server isn’t used that much, it’s basically a media archive. Out of 28 HDD (+2 parity) only about 3-5 are spinning daily. I use multiple HDD cache pools + CA Mover Tuning plugin to reduce drive spin up even further. I keep the HDD cache pools spinning, and there’s one for each of my shares (another reason to not just use a single large share called “media”).

This is how the share is configured, we’ll use TV as an example:

Basically, anything that was ingested on the server within the past 30 days stays on the HDD cache pools. After the file has been there for 30 days, it gets moved to the main array and “archived”. It’s still accessible obviously, but it’s on the main array. Here’s the CA Mover Tuning config that I use: 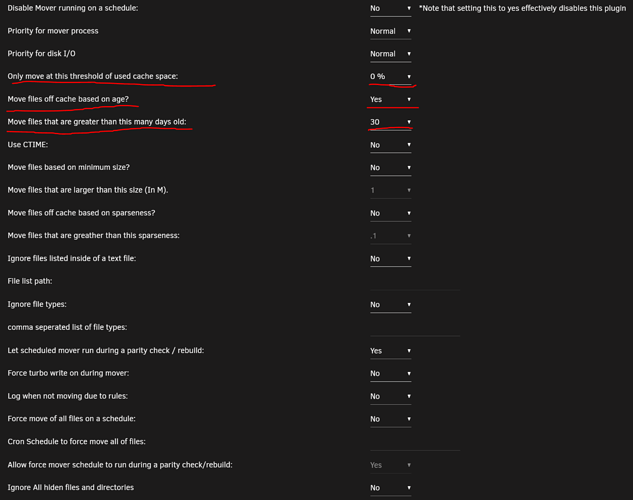 As I said in the overview, I use this in conjunction with SSD cache. The following shares should be configured as Prefer:SSDcache, and should never live on the array:

This server is my Unraid Gaming machine. I don’t do anything fancy with CA Mover Tuning, but I do have a HDD cache pool. This one is a pair of WD Red 6TB in BTRFS RAID 1 (mirror). I use it as large file ingestion, but I move content off of it daily. I also use it to store a large library of games that I don’t want on my array, by using Prefer:HDDcache on that share. It also has a VDisk for my gaming VM that is for large bulk game storage on steam - games that aren’t affected by loading time, basically.

HDDs are useful tools in cache pools due to their size:cost ratio. You won’t burn them up by writing large files to them constantly like you would an SSD. This is a relatively new feature of Unraid, and I see a lot of people aren’t using it yet. HDD cache isn’t ideal for every situation, but most would benefit from adding at least one to their setup.

If you have any questions, feel free to ask!

So, because i’m not an unraid user, I need you to dumb it down even further for me.

The main goals of using a beater 1TB drive as a cache is to:

So, because i’m not an unraid user, I need you to dumb it down even further for me.

The main goals of using a beater 1TB drive as a cache is to:

First, let’s go over how cache works in Unraid.

Shares can be set up to interact with cache in 4 ways.

I use the UA plugin to create a mnt for the mariadb container that can be read on my network (ie mounted by a thinclient, possibly my HA-Pi in the future). I’m not sure if that’s best-practice or not?

aahhh thanks for the unusually detailed explanation JDM. it was epic. I didn’t know that writing to the unraid drives was ‘expensive’ in terms of parity and speed. so that makes more sense.

incidentally i’m noodling with the idea of, on my openmediavault system, of using mergerfs to create a “write cache” SSD… it’s in the mergerfs man page and might be worth a shot.