This build was put together to replace my Supermicro Mini Server SYS-5029S-TN2 (i5-6400 + 32GB ram + 4 x 8TB WD Red shucked drives) with something much more beefy and much easier to upgrade/expand.

I wanted something that had a ton of cores and a modest amount of ram, but would be very quiet and consume a relatively low amount of power.

I run Debian 10, ZFSonLinux RAIDZ1, Docker containers (around 15 or so), Windows VM, Mac OSX VM, VNC (GUI for Debian) and use it as a spare workstation via ssh. My current server is around 80% memory usage (mainly because of write cache for ZFS), and uses about 20-30% CPU all the time. Not a bad little system, but the DDR4 laptop ram was outrageously expensive, and tops out at 32GB, hence the reason for the upgrade.

Did a ton of research on boards, and settled on the X9DRH-7F. It was the closest thing I could find to the Anniversary 1.0 build, but made by Supermicro and relatively easy to find for a decent price. I started by taking Riggi’s list of boards and just deleting each one that didn’t fit my list of wants/needs. Everyone was pushing this board, which makes total sense, so after some research I was able to confirm that it’s really the best board for this build. I looked at other boards that had more PCIe x 16 slots, but often were either too expensive, or did not contain a built-in SAS controller, hence another reason to choose this board.

RAM was hard to find for a decent price, so whatever you use, be sure to check that it’s compatible by using the “Tested Memory List” link on this page: https://www.supermicro.com/products/motherboard/Xeon/C600/X9DRH-7F.cfm

The suggestion was to buy 16GB memory modules, but every kit or separately priced sticks were just too expensive, so I opted for a kit of 64GB (8 x 8GB) since it was much cheaper and allows me to easily upgrade down the road.

At first I went with the Dell Area 51 R2 liquid-cooled CPU cooler since it was cheaper, but it ended up arriving damaged, plus the hoses were far too short to reach the fan wall, so I ended up returning them. I purchased the EVGA CLC CL11 as replacements, which fit perfectly and work quite well. Even in a hot closet, it never gets above 40C. These were the ones that JDM used in his liquid cooling installation video, and were the cheapest of the bunch.

This system has been running for almost a week now and has been great! The Supermicro IPMI interface is super slick and a super nice feature to have.

The old server consumed about 48-50W at idle, which was crazy energy efficient, but not all that useful for me. This new build with is more than 2-8 times more powerful (depending on the spec.), but only consumes around 100-130W at idle, which is still not bad!

Fair warning, this LSI card was an absolute pain to flash to IT mode, so be sure to follow the article I wrote about it here.

This system is a bit louder than the old one, but that’s going to happen since it has 2 more 120mm + 2 80mm fans running. Other than that, it’s been great so far! 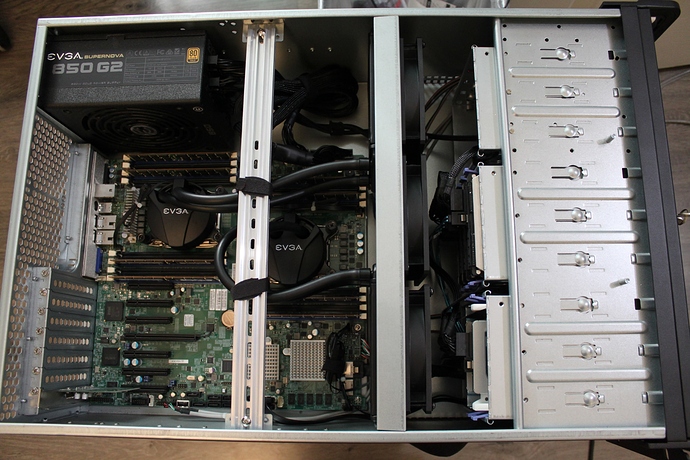 First Boot out of case

As suggested, I installed the CPUs + Liquid Coolers, RAM into the motherboard outside of the case for initial power-up. The Corsair PSU claimed to have Dual EPS, but only had one. Ended up doing the initial boot with only a single EPS connected until I found the EVGA PSU in another machine and swapped them out. 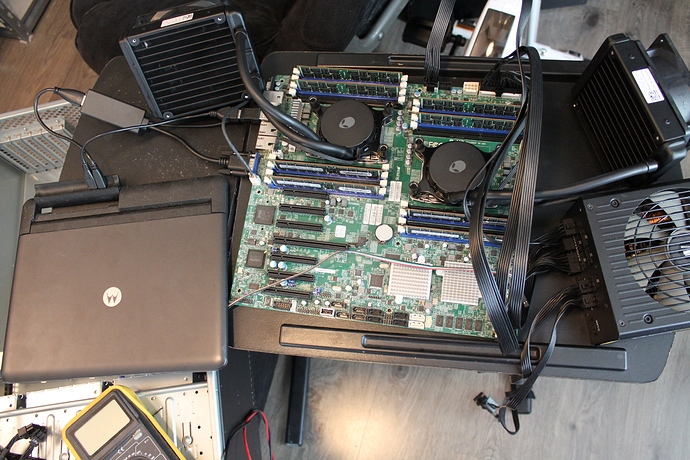 overview-out-of-case4752×3168 1.72 MB
Hooked up a Motorola Lap-dock (my poor-man’s crash cart) and double checked the pinout from the Rosewill power button (Separate power switch + LEDs were not scavenged just yet, so I just used the case’s switch since it was close.) 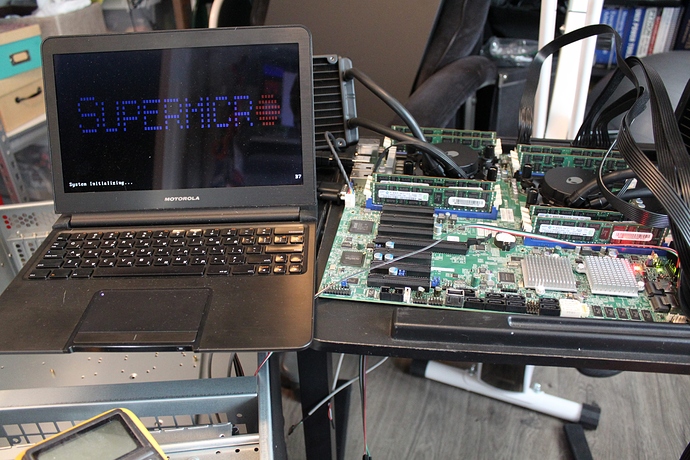 first-boot%20lapdock4752×3168 1.94 MB
Woo hoo! Got it to POST after a bit of troubleshooting. Initially tried to use a separate EPS cable I had lying around, but it didn’t work, so I just used one EPS to get it booted. 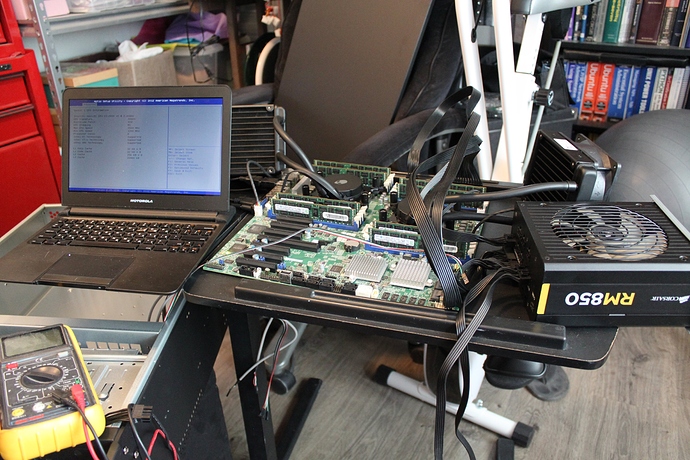 Got into the BIOS and started setting up some initial settings and verified that it detected both CPUs and the 64GB of installed memory. Now that it booted, off to the case!

Thanks to OriginalTexter’s pictures/standoff locations, installation was a breeze. See those locations here. Measured everything just to be sure, installed the IO shield and put the motherboard in. 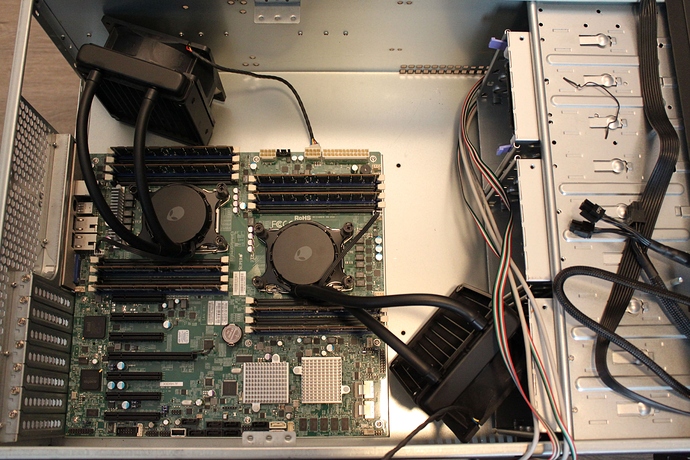 mobo-in-case4752×3168 1.19 MB
After all the screws were tightened down, started to get the drives installed and ready to go. 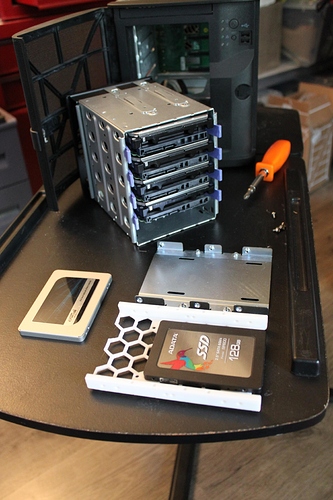 hard-drives%20ssds%20trays3168×4752 820 KB
Installed 4 x 8TB WD Red (shucked drives from the previous server) into the drive cage. I only had one 3.5" to 2.5" tray adapter, so I printed another tray on my 3D Printer (Monoprice Maker Select). After checking fitment against another SSD, got them both installed into the drive cage. 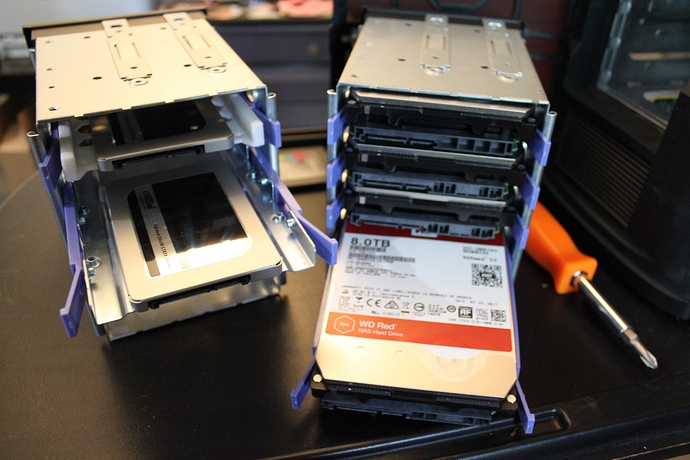 Put both boot SSDs into the drive cage on the power button side of the case, and the WD Reds in the middle so that the center fan could could them on it’s own.

It turns out that the EVGA Liquid coolers were a bit too close to the RAM tabs on the fan wall, so I had to drill another set of holes to move the fan wall back a bit. Unfortunately this made installing the Hard drive + SSD SATA power connectors a bit challenging. To prevent the fans from rubbing, I had to use some cable ties/velcro ties to keep the SATA power and data cables tied down. 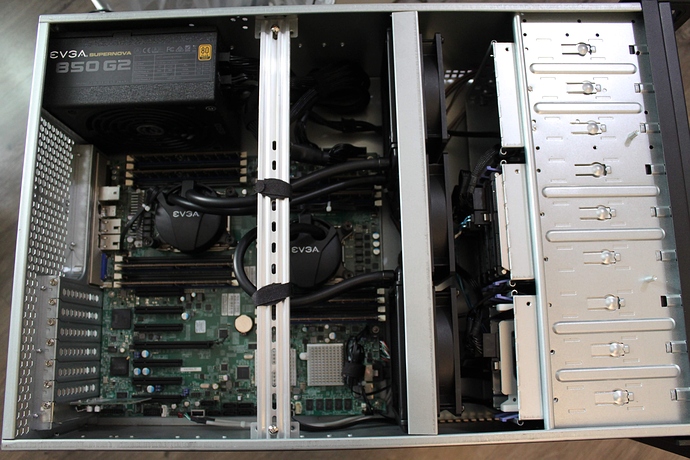 The radiators almost fit, but when I went to install the wall it would push the RAM tabs just enough to pop out the RAM. To prevent this, I drilled another set of holes to move it back a bit more. I drilled holes closer to the drive cages at the following dimensions: 15" back from the rear of the case, 2 1/8" and 5 1/8" from the bottom of the case on both sides. That moved the fans just far enough away to get the radiators to fit correctly. 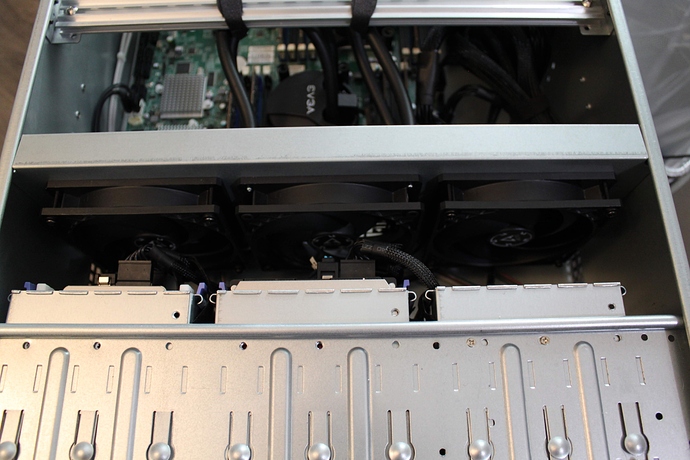 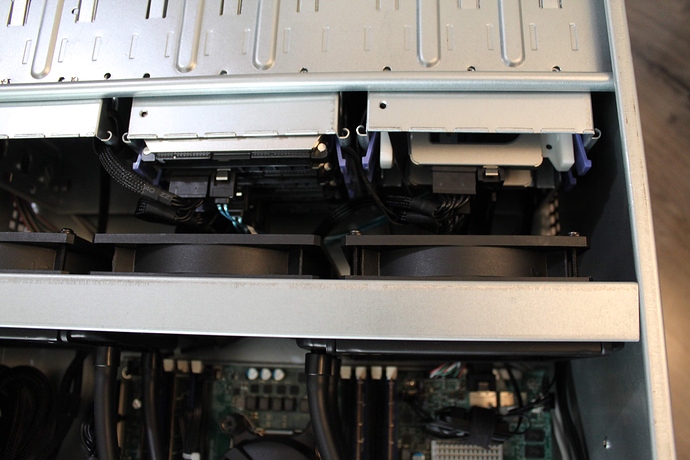 I added zip-ties to the SF8087 -> SATA cables to keep them tidy and prevent them from moving too much and interfering with the fans.

To keep things from moving around and to help with airflow, I zip-tied and velcro strapped everything to the case wherever it made sense. Even though I didn’t have to tie down the radiator hoses, I figured it would be good to just tighten them against the support rail to prevent vibration from damaging the hoses. 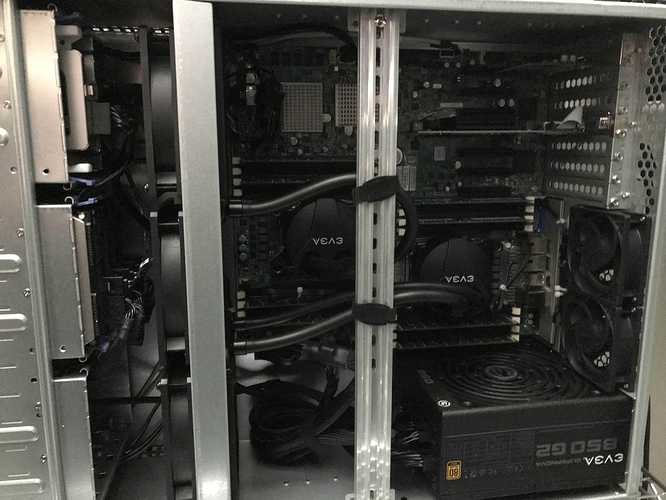 This last photo contains the complete build, including the 2 x 80mm fans.

Here’s the IPMI interface displaying the temperatures and fan speeds. In a closed-door closet, it runs very cool. I have never liked how hot the LSI cards run, but apparently is well within spec.

Comparison of old to new

The following charts were grabbed from Grafana + Prometheus metrics collection over a 24 hour period of time.

Here’s an overview of a 24 hour period of the old system:

Now that I have more power, I can re-enable the containers and virtual machines I had to shut down to prevent the system from bus-locking and being a bit slow.

This server will likely be overkill for what I need, but will allow me to experiment with a slew of projects I have been waiting to try without having to juggle hardware or shutdown other items.

Here’s some details of what I was using before as a server:

Super excited to have tons of room to expand, both storage and utilization. Having IPMI is extremely useful especially for pulling simple things like sensor data, and full remote control of it while I am away from home. E.g. Sensor data via IPMI:

Feel free to ping me on Discord (spikebyte [US]) if you have any questions.

Big thanks to @Riggi @JDM_WAAAT @seanho and the many others that helped me with various troubleshooting and parts research. Such a fantastic group!

Sounds very similar to my system. I went with dual E5-2650L v2, more cores and lower power, but lower clock speed. I also have similar VMs, but my power usage is closer to 400W. I run my security cams on a linux VM so the 10 cameras keep at least some cores busy at all times. I also have 25 docker containers, and a macos VM I use for the occasional video editing. Would be curious what video card you are using for the macOS vm. I have a k2000 that works fine in it.

I was definitely thinking about running a lower power processor, but the faster clock rate of the CPUs that the guys recommended was helpful for running VMs so that they feel a bit more snappy.

My power consumption ranges from 120-140W (Taken via a Kill-a-watt meter), which is not bad at all considering how much power this system has. For comparison, the super tiny Supermicro Mini Server ran at about 40-50W, but had a tiny power supply and only one processor. Still though, it’s amazing to think that something this capable is comparable to a flood light running. Technology is really amazing.

I actually just threw in a totally random card I had sitting around: GIGABYTE GV-R465OC-1GI. I was actually considering upgrading my gaming machine’s graphics card to something, and taking that system’s card and using it in this system. It’s a EVGA 960 SSC. I had thought about going with something like your Cuda/Quadro card you used that might not require as much power, but, we will see.

For the Mac OSX VM, I am using some rando Mojave vagrant VM on Virtualbox. It seems to work well enough on 128MB of memory, but like I said, not planning on doing anything graphics intensive.

How do you connect to your Mac VM? RDP over Virtualbox or just Screen Sharing?

For the Mac OSX VM, I am using some rando Mojave vagrant VM on Virtualbox. It seems to work well enough on 128MB of memory, but like I said, not planning on doing anything graphics intensive.

How do you connect to your Mac VM? RDP over Virtualbox or just Screen Sharing?

I use VNC viewer. I find it faster than the web based ESXI viewer. I can definitely tell its remote, but not so much it impacts what im working on. Trying to run it without the dedicated video card the VM was slow and laggy, but oince I added the K2000 card it was snappy. I think if I needed it more responsive I could just output the video to a screen locally.

I thought that the EVGA CLC CL11 was square ILM only?

Did you have any issue with Narrow ILM with the CL11?

I did not have any issues. I used the Asetek adapters, and they worked perfectly.