Haven’t installed the NVME and wondering if 250gb will be enough - thoughts?

8TB is all the space you need? What are your plans for expansion after that?

Truthfully, I jumped on the purchase without planning it out too much. Hindsight, I would have built the multi-tasking NAS (OTiS). I’m just starting my library.

Edit: If you have good upgrade path, or better than a seperate build, I’m open. I originally wanted to do an AIO but thought separating the NAS and PMS would be beneficial. I haven’t seen evidence that it would. Not a big deal though.

The NAS Killer 4.1 is the best cheap NAS build right now. Since you have a dedicated QS box, you can just get the lowest end combo with 8GB of RAM.

Hey everyone, found some really good deals on ebay and thought I would throw something together for ya’ll. This guide will outline the deals that I found. For the rest of the parts and information, please refer to the main build guide. MAKE SURE TO USE THE “BEST OFFER” FEATURE BEFORE PURCHASING

oh i though “k” worked, i know it doesent give anything in thing system but i figured could be “nice to have” with a future motherboard.

i will run proxmox on the 290, “retire/sell” the dual e5 2640 i currently have running and very little of that cpu power is put to use as it is today.

Sounds like extreme overkill, unless you have a specific use for it. You may be better served by a non-prebuilt system, such as the OTiS.

I see the NK 4.x being recommended more often than the 5.0 - any specific reason?

For the QS box: assuming no thumbnail previews - 250gb enough or worth moving up to 500gb? When I do upgrade, I’ll probably move some of the containers (ie Sonarr, Radarr, seeding, etc.) over to the NAS, assuming that’s recommended.

Thumbnail previews do take up quite a bit of space in the Plex metadata folder, but they aren’t the only thing that you need to think about. If you don’t use RAM transcoding, the transcode folder can get quite large if you have a lot of simultaneous transcodes going. Any time Plex needs to change anything in the media, whether it’s a full transcode to reduce bitrate or changing the audio stream or even just changing the container, all of the stream components go into the transcode folder. Transcoding to RAM will eliminate that space requirement, but that’s not the only thing that could be taking up space. Offline sync can use a bunch of space as well. If your brother-in-law decides to sync an entire season of his favorite show in anything other than original quality, all of the files will be transcoded and saved in the Sync folder until he’s finished downloading them. There’s also the PhotoTranscoder folder, which stores copies of media posters, backdrops, cast posters and other images in various sizes and formats to be sent to client devices. This one usually won’t be exceptionally large, but it can still get into the several gigabyte range if you have a lot of media and a lot of different clients.

TL;DR Go with a 500GB drive. Even if you don’t need all the space today, you might need it down the road.

I see the NK 4.x being recommended more often than the 5.0 - any specific reason?

Perfect, thank you. Swapped the 250 for the 500. Will have to look into Transcoding to RAM.

@JDM_WAAAT - Thank you. And more so for putting all this together. New to all this and you have made it easy for someone like me to jump in!

if the proxmox doesent pan out i´l use as a transcoder,opnsense etc, i usually figure some out

SO if i purchase a HP290 can i use it as my plex server and use for torrents also? run ubuntu on it? and build the NAS with your 5.0 nas build?

I’ve repurposed my 290 a few different times for different ideas/projects. it’s current form is with the stock cpu, intel 16gb optane ssd as the boot drive(ubuntu 20.04 server lts) and a shucked 8tb easystore for mass storage. currently running jellyfin and so far so good. Kind of thinking i should’ve gone with lubuntu or something but wanted to try something new.

as a side note, the included psu works fine with shucked drives since it’s 4 pin. but also read that since it’s the edaz model it’s air filled and doesn’t need to have the 3.3v mod.

as a side note, the included psu works fine with shucked drives since it’s 4 pin. but also read that since it’s the edaz model it’s air filled and doesn’t need to have the 3.3v mod.

I’m with you up until the “air filled” part. Air/helium do not inherently make it need the 3.3v or not.

Yeah that didn’t make sense to me either. That’s what a couple responses were over on sth.

“ It has come to my attention that this is a AIR filled drive and not Helium like the others. It also DOES NOT REQUIRE the 3.3v pin mod.”

“ EZAZ-11TDBA0 requires tape hack (unless you are using it in a server backplane) or alternatively (what I do) is a use a Sata->Molex adaptor that is missing the orange wire.

Well, that may be the case, I just don’t think those two properties are related in any way.

Even so, you can safely 3.3v mod the entire SATA power cable, it won’t affect the drives that don’t need the mod in any negative way.

“k” model CPU’s work fine. I installed a i5-9600k along with 32 GB RAM and an LSI SAS9207-8e HBA. This little box will be my unraid server (consolidating a few machines). I tested out Plex running in a docker container passing through the CPU to use Intel Quick Sync for hardware transcoding… and it works like a dream! 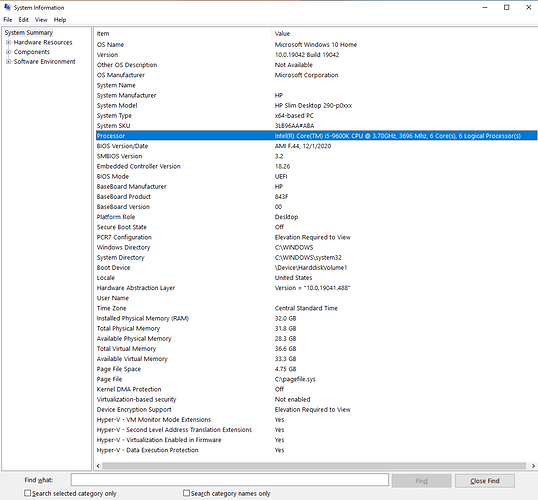