I have been running UNRAID since 2012 but heading in to this year my original build (AMD Sempron, 4GB RAM, 8TB storage) was beginning to struggle. Having added a few more dockers, moving to Plex and accumulating higher-quality media, it was beginning to show its limitations. Fortunately the first lockdown gave me plenty of extra time to begin researching. As a first step, I migrated Plex to an HP290 but knew I still needed to enhance my UNRAID server.

My use case includes storage, media download automation, security cameras and home automation. Low-power and noise was also desired. VMs and remote gaming are not part of my needs. I am the primary user and there is very little family use.

Originally I was debating between a NAS Killer 4.0 (to meet my needs) or an Anniversary 2.0 (to well-exceed but cover anything I may decide I “need” down the road). Ultimately I decided to jump one generation ahead of the NAS Killer 4.0, thinking the NAS Killer 5.0 would be launching soon.

Being Canadian, it can also be challenging to get the same deals available to the US members but I did my best to be patient and jump on items as they came available. It took over a month of various orders and another month of shipping for everything to come together.

Parts (all prices were CAD, shipped)

Unfortunately I only took 1 picture while putting it all together. I think this was taken while flashing the HBA card. 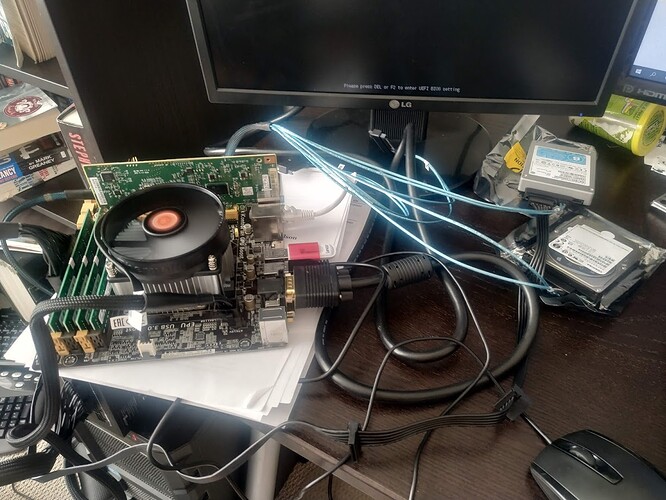 This is the system today:

Overall impressions are very positive. The system has handled everything I’ve thrown at it and I haven’t wished I had bought more power. It is much snappier than my old system and I am no longer stressing about running out of space.

The only issue I’ve had is the SSD, being used as a cache drive, failed. I temporarily installed a second SAS drive and ultimately decided to keep it that way. BitDeals offered to replace it but it was not worth the Canadian shipping costs so I took a refund.

That is one fine looking UNRIAD theme… where did you get it?

Custom Serverbuilds.net theme I created for Unraid. Instructions and files included in the .zip file. Please comment with any questions and ENJOY! Unraid Banner Install.zip (791.9 KB) [image] Additionally, you can install Theme Engine from the app store, and use the below theme .zip for added customization. Based it off of this post Setting up Theme Engine for Unraid ServerbuildsBlue-black.zip (938 Bytes) [image] [image]