I currently have a Lenovo TS140 as my primary Unraid server running lots of goodies. Looking to build a backup box that will run Unraid. Primary functions will be backup server and Shinobi security camera storage.

Currently leaning towards this Micro ATX build to allow for more expansion at a later time.

Unless you’re getting a great deal on WD Reds, look at WD My Book, WD Elements, or EasyStore external drives 8TB or larger and shuck the drive out. These are enterprise drives in the WDC HGST Ultrastar He10 family of drives.

Yup I just bought some 14 TB elements that went on sale the other day to go into the primary Unraid server. I’ll be moving some of the 3 TB reds there into the new backup server.

So here’s my final build BOM:

Parts are ordered and will be arriving over the coming week.

Finally got all the parts in. The case had a bashed up corner so I returned it. Found on reddit someone with some Fractal Design Define Mini cases for sale, https://www.reddit.com/r/hardwareswap/comments/fr9dh1/usavahfractal_design_define_mini_a_lot_wpaypalcash/, which is more in line with the size and HDD capacity I was looking for. Should be here Friday.

Following experience & Rule 0, I bench tested the mobo, CPU, memory, thumb drive, and SSD with memtest for a few cycles using the unRAID USB boot drive. No problems. Now adding the kapton tape to the 3.3V contacts of the precleared shuc’d drives.

Replacement case arrived finally. That was the last major piece of the build. 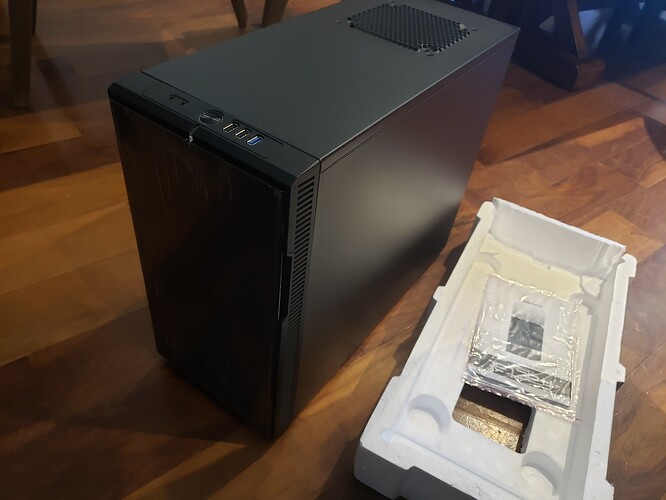 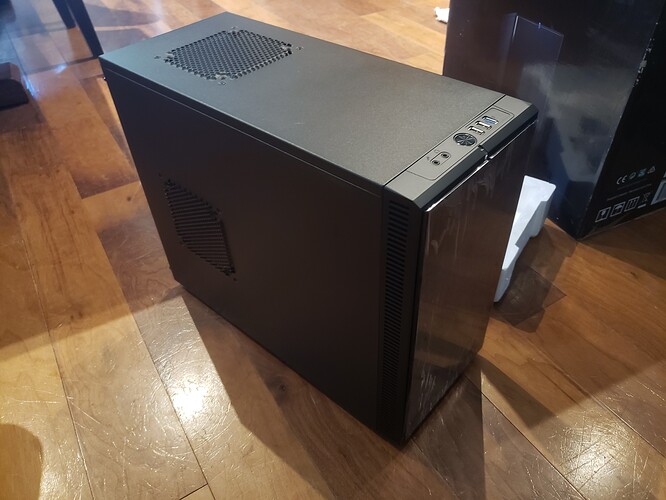 Here is the completed build BOM:

I’ve been running unRaid on a used Lenovo ThinkServer TS140, AKA TOWER (so original, I know), since Dec 2016. I bought 2x 14 TB WD external drives when they were on sale for $190 each. Those are going in the primary unRAID server. 2 of the 3 TB WD Reds will be moved from there into the 2nd unRAID server. I’ll be replacing the current cache drive in there, Samsung EVO 250 GB SSD, with the ADATA SU800 512GB I just purchased then re-purpose the 250 GB for VMs only. Once the USB 3.1 card arrives I’ll install that in TERGUM since the mobo doesn’t have it natively.

So after a weekend of backing up stuff & shuffling drives between servers, I installed the mobo, memory, usb stick, ssd, and drives in the new build. 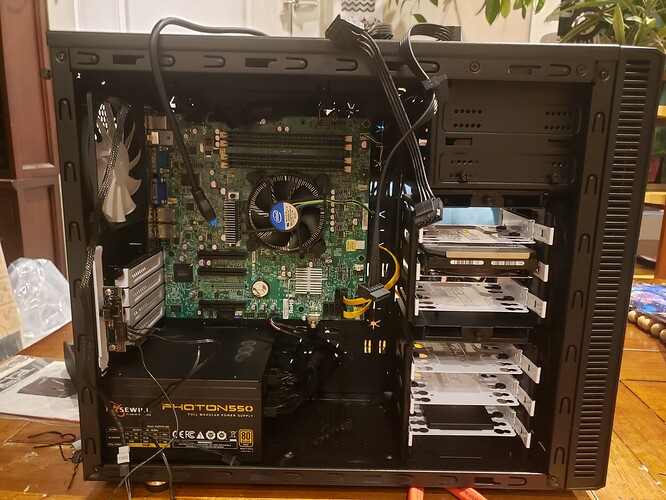 All installed and tidied up. 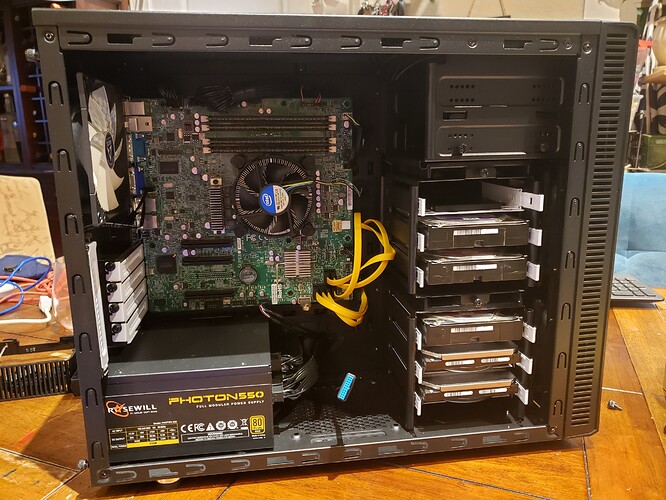 I opted not to use the fan controller that came with the case. I also removed the 3 pin 120mm stock fans and replaced them with some 4 pin PWM Artic ones. I pre-routed the USB 3 header so that once the USB card arrived, it’ll just plug in.

Thanks. This is my first build that has IPMI. Once I get the new unRAID box into the closet with the other, then I can start playing with that. Only weird issue I had was when I initially got it all up and running both of the 8 TB drives were running @ 45-50 degrees C. Not a major concern as they can run fine at 60 degrees. I installed the BOINC docker on it to stress test it and help out with COVID. Had all of the cores pegged @ 100%. It ran fine all night and in the morning the drive temps all settled down to below 40 degrees.

Thanks. If I had paid better attention I would have probably tried to locate or have asked the eBay seller if they had a X9SCM version as it has 2 SATA3 ports while the X9SCL only has SATA2 ports. Not really going to see much of a performance difference but would have been nice for the cache/SSD drives.

Yeah. The X9SCM is also a fine board. I’ve run SSD’s off SATA 2. For home server/NAS they worked well enough. You can always upgrade later. Or if you’re not satisfied, you could simply upgrade now and sell the current board. You’re the master of your own server destiny!

I’m half way tempted to buy another one of these cases to swap the innards of the TS140 into. Much nicer drive access with significantly better airflow.

I have a brand new Fractal Design Node 804 that I’m going to be listing in the forum if you’re interested. It’s brand new in box. I’ll be listing it for $60 plus actual shipping.

Yes the older FD Define Mini. The seller still has a few cases left. I was pondering the 804 for this build but preffered a tower to fit in the “server closet” aka laundry area better.

I just purchased a SM X9SCL-F motherboard myself and right now im looking for a chassi.
Did you have to mod the case to make it fit? From what i can see its a 1U mb?
Do you know of any other cases that will work?

There’s no such thing as a 1U motherboard. It’s simply Micro ATX.

I ended up using an older Fractal Design Define Mini case shown in the build pictures as the Corsair one arrived all beat up. No modification needed.