I appreciate the response and I’m glad I looked around a bit more and waited before impulse buying.

I’ll give a closer look at the 4.1 builds. Thanks!

I picked up a Supermicro X9SCM-F to upgrade my old NAS Killer build from 2018. Does the ram I have work with this board? It’s a bunch of 8gb PC3-10600R sticks. I’m not sure of the speed on them.

Unfortunately not, you need ECC UDIMM, you have ECC RDIMM.
Check out the RAM links in the guide above.

Ahh that’s what I figured when I was looking at the ram listed here. I’ll go ahead and look for the right ram now haha, thank you!

The SAS to SATA breakout cables in OP went up a bit. The red variant by the same maker has 20% off coupon right now; $11.99 for two sets of cables.

I personally have run these same cables for 3 years without issue.

These boxes do not look like good options for a NAS as they have limited drive space. Anything with SFF (Small Form Factor) is a clue that it’s not made to hold many extra drives.

I understand that it can be a bit overwhelming. You use case is for a basic NAS, and the primary function of a NAS is storage. Therefore a primary consideration should be # of drive bays. You don’t have to fill all them, but if you limit yourself to 2 or 3, then you limit your ability to easily grow your storage space. You should not need a ton of CPU or memory for this build.

This is logical but I think I can work around this using expansion cards like this: https://www.amazon.com/dp/B07SZDK6CZ

I have written more about this here and would love more feedback: Any technical reasons why we cant have a NAS Killer using the intel HP 290 or ProDesk 400 G4?

I’m very interested in your build since it is exactly what I am looking for. I like to have a super power efficient NAS and do not need any virtualization or “apps” running on it. I like to use a SSD for caching and hope that my RAID is sleeping the majority of time.

Can you help me out with some recommendations? I can’t find your board anywhere - I live in Europe.

You can’t find it, because I recommend it to often ^^

I’m active on several NAS building websites and many people bought this board. Even the Asrock C246 WSI is sold out, although it’s not as power efficient as the Gigabyte.

The Fujitsu D3644-B is still available, but it’s not an ITX Board and mainly distributed by German resellers. But some of them offer international shipping so check them out: 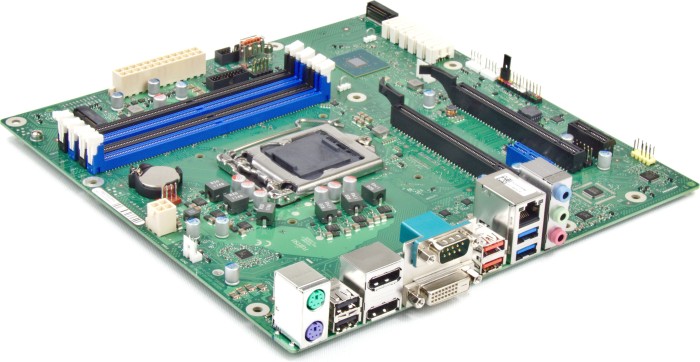 If you need ITX you are at the moment out of options if you need ECC and don’t want IPMI (which adds 5 watts). You could try to add an alert (it seems yesterday was some stock): 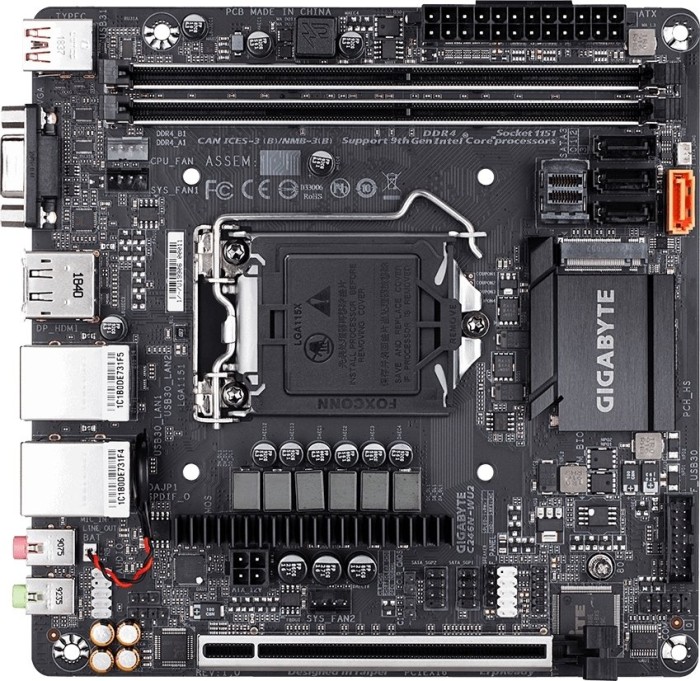 Do not buy the C246-WU4 (Full ATX). It can’t be as efficient as it has an additional controller for SATA ports 9 and 10.

If you can live without ECC RAM, you could buy a usual B365 board with 6 SATA ports. Some mATX versions even have 2x M.2 slots (like the Asrock B365M Pro4).

New member. Looking to build my first home media PC. My current setup is a 2015 Nvidia Shield Pro as my Plex Media Server and 4 WD Easystore/Elements Drives (Three 10 & One 14 TBs). My friend had equipment he gave to me on this recommended list.

Here’s what I have so far:

For OS I think I’ll lean towards Unraid after doing some research. Can I still access my drives offline if the internet went down at my home? I currently use Radarr, Sonarr and Qbit can I use those on Unraid?

I’m basically building this for myself and several others in my family.

Thanks for the help in advance, still a novice at this but willing to learn.

Yes, Unraid allows for local network access regardless of your ISP connection. All of those things you can use on Unraid.

First I want to say is thank you for taking the time to make guides like this.

I do have a question though. If it was covered I missed it, but has to do with how this works. Currently I have a gaming pc that I run plex off of to over 5 other people. Problem being is when it’s being used sometimes, it eats my cpu up and bottlenecks me in games. My media is stored in a external 8tb.

So I am building a new pc and am going to sell my old one because I want something more quiet and less power hungry to run plex to free my gaming pc.

I was looking at building the ultra quiet build one you have spec for. This seems ideal so I can ditch using externals at the same time. So if I built that pc, I am needing guidance on setting it up. I’ve never used unraid before. I assume there is a guide to setting this OS up? Do I need windows or anything first or do I install by booting from a flash drive? Do I install my plex server on this unraid and it works similar to a normal pc? I liked the idea of having a SSD for having a write cache but honestly not sure how to set that up.

Spaceinvader One on YouTube will guide you to and through the unRAID promised land.

Thank you very much for this detailed guide!

I flashed the HBA to IT mode, ver. 20 and everything shows up fine, all 5 HDDs are recognized and I get all relevant information from the HDDs via Linux Mint Live.

The only issue I have is that immediately after HBA BIOS, when the disks are started, the HDD heads start to permanently make clicking noises as if they are tasked with heavy read loads, even though I’m just inside the mainboard BIOS or booted Linux Mint staying idle.
This causes the HDDs to heat up so much that they’re getting hot to the touch in literally 5-10 minutes, even though a 120mm Noctua fan is directly pointed at them and the server case is standing on my living room table at 22-24°C room temperature.
The HDDs are 7,200^-1 versions, so the physical spinning shouldn’t add that much heat, it’s rather like the HBA is tasking the disks with something which causes them to work under full load permanently.
Any tips as to how I can look into this matter or any info on if that happened to anyone before?

Thank you very much in advance!

This causes the HDDs to heat up so much that they’re getting hot to the touch in literally 5-10 minutes, even though a 120mm Noctua fan is directly pointed at them and the server case is standing on my living room table at 22-24°C room temperature.

When you say heat up, do you have temp numbers or are you just feeling them with your hands?

When you say heat up, do you have temp numbers or are you just feeling them with your hands?

I’m feeling them with my hands. Can’t give you exact temperature numbers because I can’t read the S.M.A.R.T. values on my Linux Mint Live version without internet connection. (need apt-get) Have to move the server case to my PC desk to connect it to the internet first. Will do that tomorrow, then I can give you exact temperatures as S.M.A.R.T. is reporting them on a proper timeline.

Can you give me some info on the constant clicking of the drives? Is that normal?

Was able to do some testing today. Unfortunately I wasn’t able to capture these logs as screenshots, so here they come as photos instead. 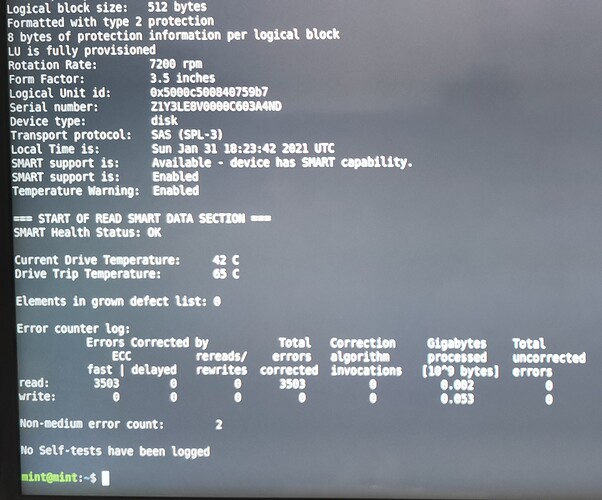 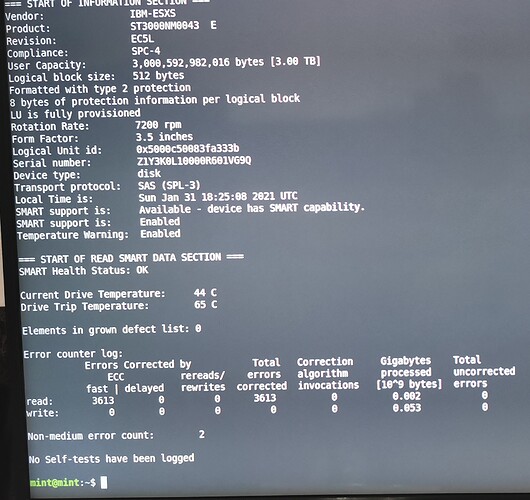 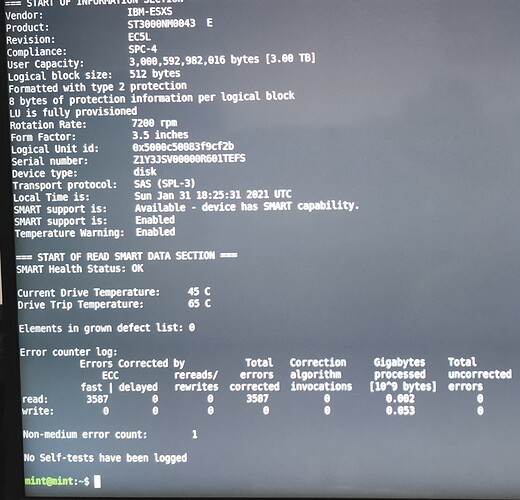 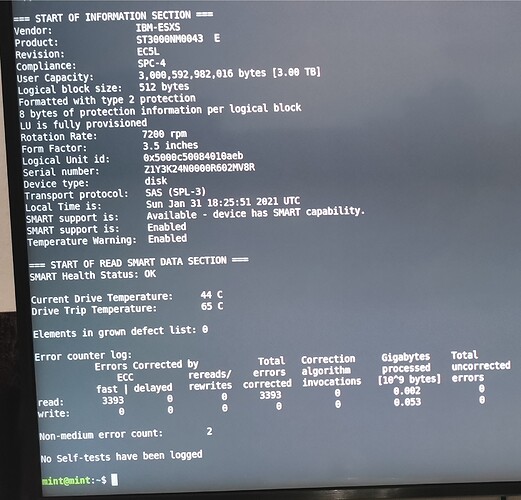 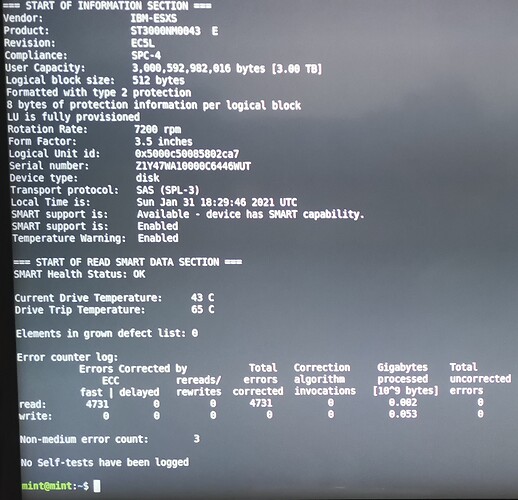 These are the temperatures after 15 minutes of heat soaking in 3-minute-intervals: 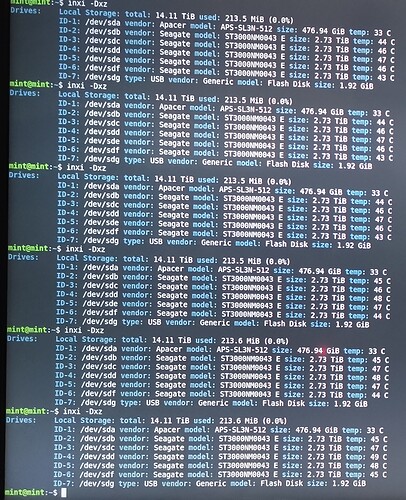 As you can see, disk 3 which physically is sandwiched between 2 and 4 almost reached 50°C.

Checked the BIOS fan-settings of the mainboard, manually set all fans to 100%, removed the dust filter from the front intake and was able to bring the disks down to 40°C.
I conclude that the intake fan doesn’t cut it and despite wanting a silent system, I have to compromise lower temps with louder fan-noise.

By the way, the clicking of the HDD heads ceased after idling for about 20 Minutes. It still returns on reboot but it doesn’t take 20 minutes anymore for it to stop.

Those temps are totally within normal operating specs.
My unraid warning temps are around 54C and alert temps are at 58C.

Thank you very much for your support.
Up till now I always only worked with SATA drives which are attached to the MB onboard SATA controller and drive temps always were between 27°C and 32°C, depending on room temperature and load.
As long as self-encrypting SAS drives are in their comfort zone between 40°C and 50°C I will just leave it as it is. The datasheet of the ST3000NM0043 states that the drive’s AFR shall be reached at nominal case temperatures of 40°C and that the drives internal tripping point is set to 65°C drive temperature.
I will have to see where the temps end up on normal read loads.

Thank you very much again for your efforts!

With specific regard to the mini-ITX build, am I good to run the DQ77KB full time with just the 120W power brick? I wanted to build my first NAS to be quiet and power-efficient and utilize parts I had already laying around.

My build parts are as follows:

Has anyone built the mini-ITX as outlined in the build guide and had it running 24/7? My main concern is whether the 120W brick is sufficient, and whether it would somehow “overheat” or burn out due to max output? I don’t have much experience with laptop-style PSUs. Please don’t mistake me as trying to question @JDM_WAAAT’s advice as outlined - I am just looking for reassurance I guess.

Thanks in advance! I know these are really basic noob questions, but I’d rather confirm before I buy additional parts.