I’m looking into expanding the drive capacity of my media server with a Raid Controller card and am looking to add 4 SAS drives. My server runs on an Asrock B550m Pro4 motherboard so natively it does not support SAS drives. I currently have no remaining SATA ports available to add drives so am looking to add ports with a PCI card. I have taken a look through the list of recommended HBAs to check current prices on Ebay and stumbled upon the LSI SAS9212-4I4E which is only $20 but is not on the recommended list. From what I can tell this HBA looks like a good value. Is there any reason why it isn’t on the recommended list? Is there another HBA offering the same or better value for my situation that I should consider?

Looks like it is based on the 2008 controller chip so flashing it should be a problem.

It does use SATA ports for the 4 internal, so you have to make sure you get the right cables or adapters.

If you ever wanted to expand beyond the 4, you’d have to run a cable from the external connector, or get creative with a break-in cable and an expander.

I don’t really see a reason to avoid it so long as you are aware of the above.

Hey bob, thanks for the reply. I actually wasn’t intending to flash it as I don’t have any software RAID. Will I be able to use hardware RAID 1 with the card itself? Thanks for pointing out those details, I definitely would prefer a card with only internal connectors so now I’m thinking the LSI 9210-8i which is also on the recommended list.

Hey JDM_WAAAT thanks for the reply. Now that you’ve pointed it out I do want a card with internal connectors only so I’m thinking the LSI 9210-8i. My intention is to use the cards built in hardware RAID as I don’t have any software RAID. Will I be able to utilize the hardware RAID with the card without any external software?

Edit: Yes that was the list I was referring to.

Are you not planning on running Unraid or FreeNAS?

I am not planning on using Unraid or Freenas as my media server is running on windows server 2019 and is used for multiple purposes including just being a regular desktop PC that I happen to run 24/7. My experience with RAID is very limited, I’ve only ever used RAIDxpert2 and windows storage spaces, both of which were not ideal. How difficult will it be to use hardware RAID with the RAID card? Is it difficult to use/complicated in comparison to software RAID?

Unraid is a hypervisor and can easily run your desktop VM on top, for example: Parsec Gaming guide.

Are you opposed to dedicated hardware to a NAS? It’s not very expensive to build a NAS Killer 4.0.

As far as a RAID/HBA controller, I just posted this guide.

Overview The Adaptec ASR series RAID/HBA cards listed in this thread are known to be compatible with Unraid, FreeNAS, Windows, Linux, and more. Special thanks to @riggi for his knowledge and encouragement to give these HBAs a try.

You’ve probably seen people mod their LSI cards and strap a little fan to them. I don’t think it’s necessary to do it with LSI cards, as I’ve never had one throw an overheat alarm. However, it’s definitely necessary with these Adaptec…

I just had to google hypervisor, looks like I am in a little over my head here. The NAS Killer 4.0 guide you linked is cool, I had no idea that you could build something like that for so cheap.

That being said, if I would prefer not to need to build a new machine and am looking for a simple solution to adding more drives to my current machine without having to learn how to use FreeNAS/Unraid, what would be the best approach? Buy a RAID card and use hardware RAID? Or perhaps buy an HBA card from the guide you just posted and use some form of software RAID like Raidxpert2 or windows storage spaces?

I don’t mean to come across as rude in avoiding your suggested solutions. Unfortunately I just don’t have the time right now to learn how to use a hypervisor/Freenas/Unraid etc.

You’re not being rude, don’t worry. You have legitimate questions and I’m not going to rake you over the coals for simply not knowing about a lot of this stuff.

Unraid is extremely easy to learn and is very user friendly. It’s worth the cost to have a dedicated NAS to avoid trusting your data to windows + hardware RAID. Unraid uses a JBOD configuration (just a bunch of disks) and pools their storage together. It doesn’t require a RAID card, but we often use them in a different passthrough mode to attach many disks (often 20 or more). Unraid also allows for up to 2 parity drives, allowing for multiple drive failures without data loss. An additional benefit on Unraid is that you can use differently sized disks in the same array, which is not possible with hardware RAID.

Here’s an example of what an Unraid storage array looks like: 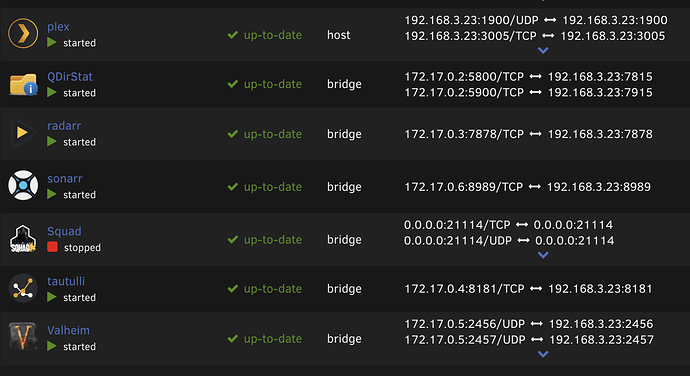 Seriously, we will help you get it set up and running. It’s worth your time and actually won’t take very long, it’s super intuitive.

Unraid is sooooo dead simple. I would say depending on your current knowledge level that there is either a very very small learning curve or almost no learning curve at all. Trust me, I’m a major dunce and I got it up and running with the help of everyone here in a day. You absolutely will not regret it.

I know that moving to Unraid can seem like a big project to tackle. I used to run my NAS etc off a Windows based server. Once moving to Unraid for everything including NAS, VMs, dockers etc, my uptime and stability are way better. I haven’t had a drive failure yet but I feel confident that I can overcome it and recover all data which is something I was never sure of using hardware based RAID on Windows. I’m far from the most experienced Unraid user here, but everyone pitches in to help when you need it from day one.

I get it. My father does something really similar. He used windows 10 as his “server” because it’s also his TV PC. (He likes to do Zoom, web browsering, and other “desktop” actions on that TV PC)

Something like UNRAID really is better. And for him it worked great. We moved him to it last August. He’s been able to learn it no problem. He found the experience much better, though it required a little more investment in $$. Our additional costs: $59 for unraid license, ~$90 for an HP290 as the replacement for the media PC. When he wants power

, he uses a VM on the unraid box using Parsec, like @JDM_WAAAT mentioned.

Before that we were using Windows Storage Spaces for JBOD. If you’re set on JBOD on windows, you can do “software raid” no problem.

Describes how to deploy Storage Spaces on a stand-alone Windows Server 2012-based server.

I don’t know many people using HBA Raid anymore. Even some big enterprises are moving to software raid. Using storage spaces will allow you to use any JBOD you want. (though I do suggest the other options mentioned before. primarily Unraid because it’s a ton easier than everything else)

It’s hard to undersell how easy it is to setup and use Unraid. Yes, it’s not Windows, so there will be some differences from what you’re used to, but the learning curve is extremely gentle. I’d wager that if you give it a shot, you’ll find you really like it.

I’ve been running my NAS on Windows 10 Pro for a long time since I didn’t know any better. I also use the PC as a daily driver, like you. Since joining this community, I’ve learned a ton about the value of UnRAID and why not to use cheap RAID cards (which are typically Marvell chipsets and have lots of issues). UnRAID will be everything you currently have, but so much more and will simiply work better.

Thanks to the advice and support from the serverbuilds community, I’m running an LSI 9211-8i HBA (with a SAS expander). It’s the best solution for expanding your storage, for sure. Lets you run SAS or SATA drives – and a lot of them! Way more than your mobo or a SATA card can.

You can virtualize your Windows installation to run within UnRAID. You don’t need to build a separate rig. Everyone here will help you get setup. You’ll still have your Windows daily driver in a VM running on top of UnRAID, but you’ll have this super powerful NAS OS underneath with data protection for your files and the ability to run different services in Docker.

Again, I came from your point of view. I thought, well Windows has worked for me for so long, why change. Then you realize the quirks and limitations of Windows that don’t exist with UnRAID. After joining this community, I was quickly and overwhelmingly convinced that I could make a ton of improvements to my setup by moving to UnRAID.

In short, you want an LSI HBA (or the Adaptec that JDM recently reviewed), not a RAID card. And it’s highly recommended that you move over to UnRAID. I’m in the process of doing so myself.

If you’re doing JBOD in Windows and are REALLY opposed to moving to something superior like unRAID then you may want to take a look at Stablebit Drivepool. It can combine any number of disks into a single windows drive and there is some (albeit limited) options to have data redundancy.

But to be completely honest you are probably better off just biting the bullet and moving right to unRAID before your data storage needs become too large. I had moved from a Server 2016 file server to unRAID with a 40TB storage pool and it was a rather long and annoying process doing some hard drive shuffling in order to get everything moved over.

Unraid’s great. If you aren’t very specifically wanting to learn other technologies, it’s really hard to find a reason to move to something else. I ran Windows Server for a while too. If you’ve got anything in there that you specifically want on windows, you could always run it as a VM too. I run Active Directory, so I totally understand not wanting to completely abandon ship. Do what’s right for you, but I’d strongly consider biting the bullet now, because the cost for switching storage solutions never goes down. It only gets harder, and more expensive.

WOW, I did not expect this much support for switching to Unraid! From everything you guys are saying it does sound appealing. Would a few people be able to answer some questions to help me before committing to switch?

Awesome, thanks so much for the help! I’m going to read up on the guides here on the forums and make threads for help as needed!