Bit of a chronicle–started 6 months ago as a complete noob looking to set up Plex for myself + a few family members. Up until last week I ran Unraid on an HP-290 with one 4TB HDD. On a whim I bought this deal for an HP ML310e Gen 8 Proliant server and migrated to the recommended two-box system with the ML310e running Unraid and the HP 290 as a dedicated transcoder running Plex on baremetal.

Some thoughts on the ML310e: this thing is insanely user-friendly. It is essentially a NAS–completely plug-and-play, literally no cabling or assembly required. There are essentially four steps required from the box to get it up and running with Unraid:

There’s some additional BIOS stuff that I didn’t mess with that runs during boot–I’m sure more experienced users will have use for that functionality. I ignore it and it launches Unraid after about a minute.

Thanks again JDM for all of your help!!

Don’t talk to me or my son ever again: 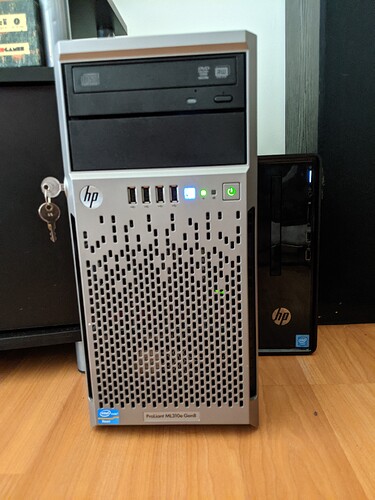 Question: if I stuck a GPU (e.g. 1060) in the server, would it be enough with the E3-1230V2 for some Unraid remote gaming? I don’t need to run Cyberpunk but it would be nice to run most games on medium.