I’ve been using newsgroups and some sort of an HTPC for the last 10 years. My first build was a Micro-ATX PC running Windows 7, a MCE remote and XBMC. I then built a smaller version of it in a mini-ITX case with an atom motherboad/CPU. About 5 years ago I discovered Plex and its ability to serve Rokus and have been using a 2011 Mac Mini + 5TB external hard drive since. I’ve been sharing my library with friends and family and when my brother gave me 4 second hand 3TB WD Reds to make use of, I started planning my next build!

The goals for my build were the following:

I looked at the NAS Killer 4.0 and tried to find a case that could fit 6-8 drives and still fit into my media center (max 7" tall and 15" deep) and was not able to find one at a reasonable price. I learned about the HP 290 and its ability to transcode 20+ streams and was immediately intrigued. I started looking at external hot swap bays on Ebay but most were $50-100 and only had 4-5 bays. I started finding some internal server hard drive cages from Supermicro, HP, and Intel and found the price to be right (and they looked awesome!)

I found the Intel AXX6DRV3GEXP 6 bay hot swap cage which is meant for an Intel SC5400 server case, for $35. It has 6 drive bays, an internal SAS1 expander, and a 92mm fan with 4 pin fan connector. The fan moves a TON of air and is very loud. I tried adding a PWM controller inline and even at the lowest volume it was too noisy for my liking and thus why I decided to simply replace the fan. The cage takes 2 x SATA (not SAS) and 2 x 4 pin molex for power. The backplane is SAS1 (this thing was launched in 2006!) therefore my understanding is it’s 3Gb/s per channel or 6Gb/s per cage. Not very fast, but plenty fast for serving Plex streams.

After getting everything up and running I realize the G4900 of the HP 290 wasn’t up to the task of doing everything I asked of it simultaneously and thus why I upgraded the CPU. If i were to do this all over again I might have waited on the HP290 and simply got a SFF Nas Killer 4.0 such as the Dell Optiplex 7010 / 3020 which while not having hardware transcoding for Plex could probably support 4-5 streams plus everything else. However, i expect that once i give my 15+ shared plex users the ability to add their own content, my server will get a lot more usage!

My completed build details are:

Thank you JDM and this community! 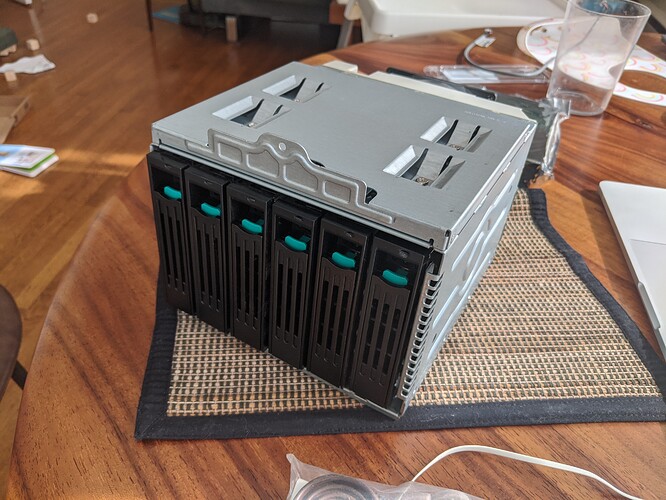 Back of cage (fan is super easy to replace as it’s just held in with a plastic clip. The included fan grill can also be easily moved as it’s held in with 4 plastic push pins) 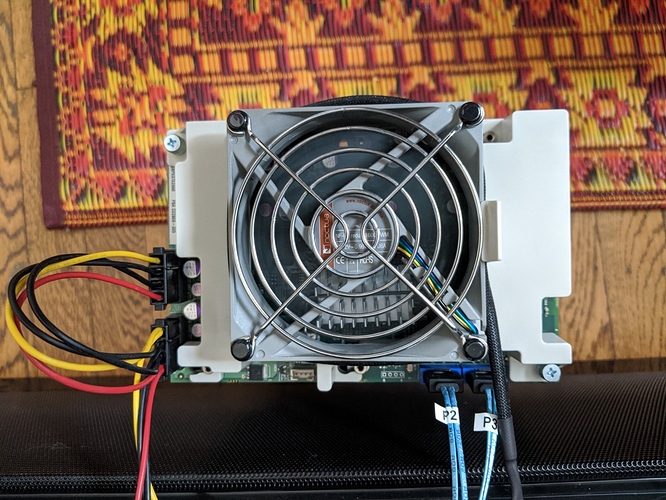 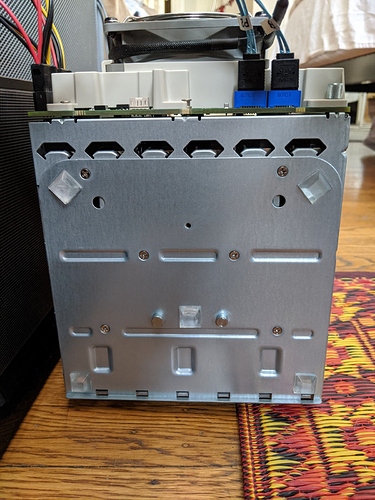 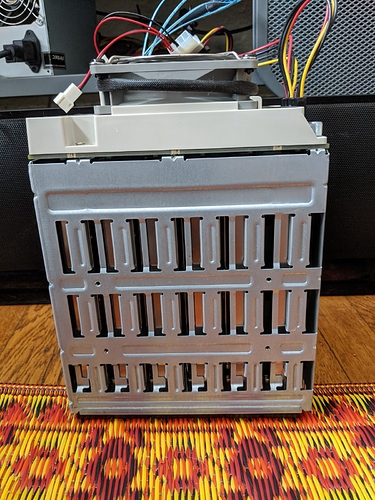 Completed build in my media center 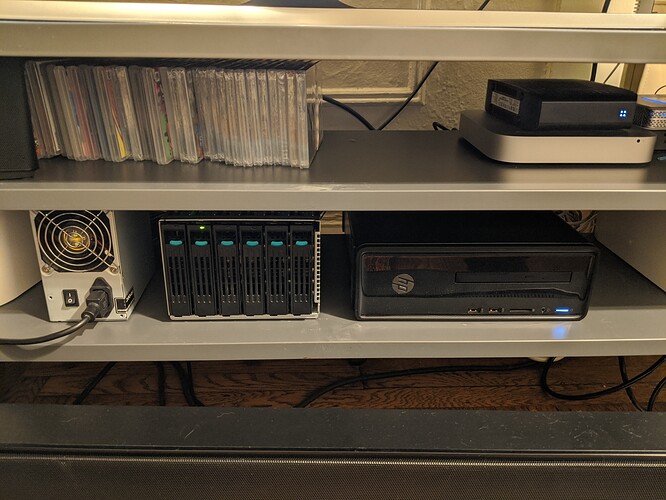 I love this - such a fantastic use of this style drive cage. I wonder if you could power the external bays with the HP 290 PSU using long molex extender cable and splitter. It has a 180watt PSU

Very clever…I am a newbie and decided to buy the INTEL unit to play with a LSI HBA card I received from a friend. Q: How many drives are installed in the DAS? Have you found any limitations on the TB that the backplane recognizes?

I currently have 4 x 3TB and 1 x 5TB drives installed in the DAS. All are SATA and all are currently recognized work fine in Unraid. Glad to hear you took the plunge! Let me know how it goes

Please confirm… you have a single cable ( SFF8080 to 4 x Sata Cable) running from the 9200-8e Card to the INTEL Backplane? With one 7 pin SATA end connected to each of the two “SAS” ports on the backplane? If so…I’m having trouble getting my head around this

Correct. 1 SFF8080 to 4 x Sata Cable running to the cage. Only using 2/4 of the SATA connectors. Presumably each one expands to 3. Yea its a bit odd that its SATA and not SAS.

I went in for the same Intel expander cage, so hopefully it’ll work for me too! I also did a ton of PSU searching and I can’t find a better deal than the Antec you found, so double nice find

Just an update for those that are curious…I confirmed the expander/drive bay works fine with 3TB SAS drives.

I just bought the Intel cage and the seller messaged me asking for motherboard part number. I’m going to say that I’m going to use an LSI HBA.

The cage has two SATA ports. Do the two Sata ports cover data for all 6 drives through the HBA? Reading above, the sata ports in a normal world would actually be sas ports, but here they are just sata?

Tell the seller to piss off.

Will try to post pics later. B+ purchase. The sas1 backplane comes off to offer a 6bay cage. It’s a good alternative to the rosewill non-hotswap 4 drive cages and cheaper than the $50 Rosewill 4 drive hotswap cages. I will see how it fits into 5.25 bays when the Michigan - Michigan State game ends.

How’d it turn out?

No pics, but it has turned out to be a bit awkward. It doesn’t fit 5.25". It fits in the Rosewill rack (as would anything). I’m likely to keep it separate on my 3-level LackRack like Loheiman

dang, was hoping this would fit into 4 x 5.25 bays. thanks for the reply though!

Could you use the external PSU to power the 290?

Maybe, but why would you want to?

To have a single power switch and could allow you to hide the psu at back of the shelf.