Just spoke with the seller of the 3.2TB NVMe, they are offering an additional 5% off - if you have already purchased, please contact them and the will give you the 5% off in a refund. Just contact them through the ebay listing in your purchase history. This brings the price down to $265.95 for the 3.2TB.

They also have added a 1.6TB Intel PCIe NVMe SSD to the deal, for $157.65 after the 5% off. Click the link below for the 5% offer on both drives (no promo code needed, you just have to use this link).
https://svrblds.net/3iKrMwN

It’s NVMe, so no problems with Unraid.
More info on the drive here.

Includes low profile bracket, but you can use LSI HBA full height brackets if you need one.

Within the server uses we have here (NAS, QuickSync, Parsec, etc), which does this work best for, and not best for?

Is NVMe for NAS RAID not ideal because of PCI splitting compatibility? IE your mobo, to support 2+ of these, needs to also support PCI bifurcation. But if it does, you have lightening fast NAS?

I still think this is an amazing deal if you have the bus to support it.

It works extremely well for everything. Any motherboard with PCIe 2.0 or 3.0 x8 physical (electrical doesn’t matter, but it will speed limit a bit) will work.

Seller now has an additional 5% off, dropping the price $10. Details above.

For this one you shouldn’t need bifurcation I believe since it’s one PCIe device.
The nvme issues come from people using m.2 drives with a PCIe to m.2 adapter, which requires bifurcation if you use more than one drive per slot.

Am I able to use this in windows or other OS’s as well? I didn’t check, and I’ll gladly use it in my server as well if needed, but this would make an amazing video/scratch/games disk too.

Yep! Should work in everything.

Awesome. I’ll have to chuck it into my hackintosh and see if that works too. I’ll probably doubt it, but if so, I’ll have to pick up a second.

Bought, it, shipped quickly and well packed.
But.

Not recognized in BIOS (ASRock Z390M). Not recognized in Windows Server. Tried to change from AHCI to Intel RST in Bios, still nothing. I know the slot is good because I just removed a Mellanox card from it.

In the past, I had an PCIe/NVMe adapter in the same spot and booted Windows from it (after tinkering).

Short of dismantling another PC to put the card in there to test, which is my next option, any suggestions?

EDIT: The card works vertically in HP 290 (still the best purchase from this group ever). It’s a finicky pin on either my board or the card which mounts it horizontally. 2.91TB in Windows, let’s see how fast this sucker goes.

Odd, perhaps it’s DOA?
Pics of where you have it installed?

Quite a few people have gotten theirs as well and have had good results.

So I was so enthused about this that I went off and bought two of them, which I just installed on my Mac Pro 2010 tower. The drives are definitely seen by the OS (macOS 10.14.6), but they don’t show in Disk Utility and there are some nasty error messages in the boot log. Anyone else try these cards in an older Mac Pro?

[EDIT] So it turns out that what’s happening is that macOS at boot time can’t find a driver that will talk to the drives. There’s something ‘special’ about them where they’re not generic enough to talk to with a standard NVMe storage driver. I’m going to see if I can get a refund; while I could probably put them into my Norco 4020-based FreeNAS server, I’d really have the cash back to use for a Mac-specific NVMe PCIe card.

I put mine in my old Mac Pro too and had the same problem. I’m running Mojave. I may try Catalina just in case.

Both mine were detected by Windows when I test them and are now working in a VSphere server.

Here is a pic of one. I am waiting on some more full height brackets. 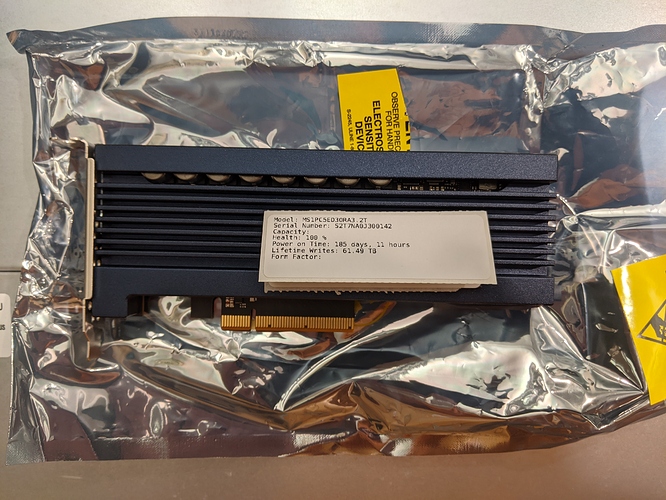 no issues in Unraid so far other than frequent high temp notifications.

When NZBGET is running, it gets up to about 72C. Mostly stays around 55C, though…

They do run warm and they are FAST. My one in a server chassis hangs in the 53 - 54c and it has constant air flow. The one in my tower case is a couple degrees warmer usually 56 or 57c.

Here is a DiskMark speed test and the temp after. 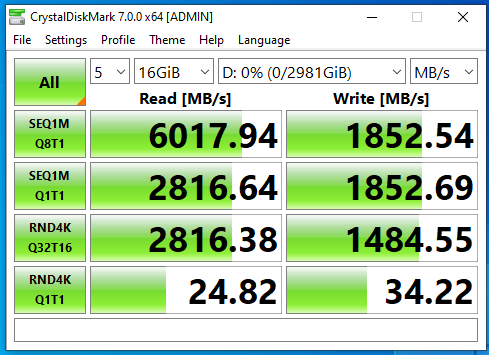 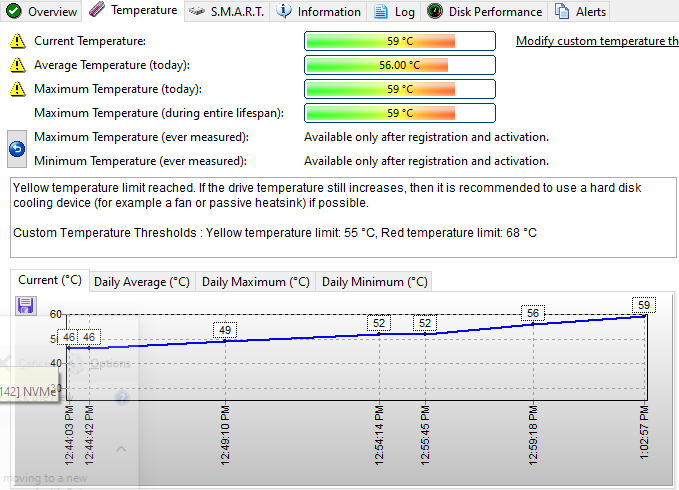 The temperature at which this drive begins to throttle is 78°C, Unraid temperature alerts (and the cautions you’re seeing @jrybolt) are intended for standard spinning disks. You’ll definitely want to adjust them for this device.

Thanks for pointing this out. You are correct I’m just using it to show the temps and should have changed the ranges.

I will say my Intel 905p runs 38 - 40c under normal use in the same tower system so these seem to run hotter.