Currently, my plan is to replace one of my AT&T iPad plans with this, in hopes that it is a faster connection. I’ll be running it as my backup network in addition to serving my IoT devices.

11/8/20
I checked my availability on the website, and thankfully I was eligible. I had the choice of ordering over text chat or calling, so I opted for text chat.

I waited about 5 minutes in queue and spoke with an agent. They asked if I was already a T-Mobile or Sprint customer, and I said that I’m a Sprint customer. The agent stated that in order to proceed (due to the recent merger) I would have to go to a T-Mobile store in person to transfer my Sprint account into a T-Mobile account. I asked if I had any other options such as starting a new T-Mobile account, they said that I cannot start a new account, but anyone else in my household can apply for the plan. Well, my wife wasn’t home yet, so I said that wasn’t an option for me at the time. I thanked the agent for their time and ended the chat.

11/9/20
I received a follow-up voicemail on my phone from T-Mobile asking if I was still interested in signing up for the Home Internet plan.

11/11/20
I called back the number that was left to me on the voicemail (844-839-5057) and was immediately greeted by a real person. I forget her name, but she was extremely nice. I told her about the situation, and also let her know that we were going to sign up in my wife’s name. The order process went smoothly. She had us create a 6 digit pin to secure our account. The entire process took less than 10 minutes. I received an order confirmation email while on the call. I asked her if she had a few minutes to talk about the plan and some other questions I had about it, even though I already ordered - she said that she’d be happy to answer.

Q: How are other customers liking the plan so far? I know it’s pretty new…

A: So far, feedback has been very positive. Many customers have been very surprised with speeds that they get, often in excess of 100 Mbps. There have been no complaints about reliability, probably due to the way that we are rolling it out. We are currently only rolling it out to areas that we consider to be “100%” experience areas, with optimal service.

Q: Is it possible to use it on the go? What if I didn’t have a permanent address?

A: Well, technically it’s possible, but the device is geo-restricted. So many people have reported success with taking it to their beach house, for example - but others have also said that it works for a little while, then shuts off. We’ve also had a lot of requests for a mobile version, especially from truckers and van-goers. It’s on our radar, and will likely come at a higher cost, like $60, while our home plan would probably drop to $45 if that does roll out. If that does happen, it probably won’t be until the middle of next year.
(she said “don’t quote me on this” so, I’m not quoting her)

11/13/20
Received an email with some more setup information. 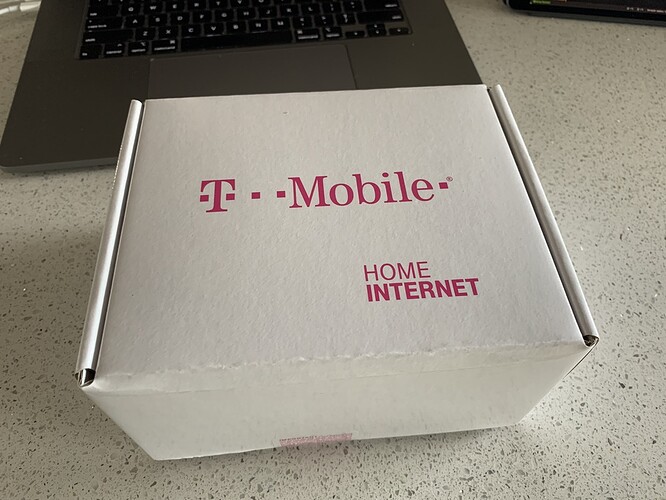 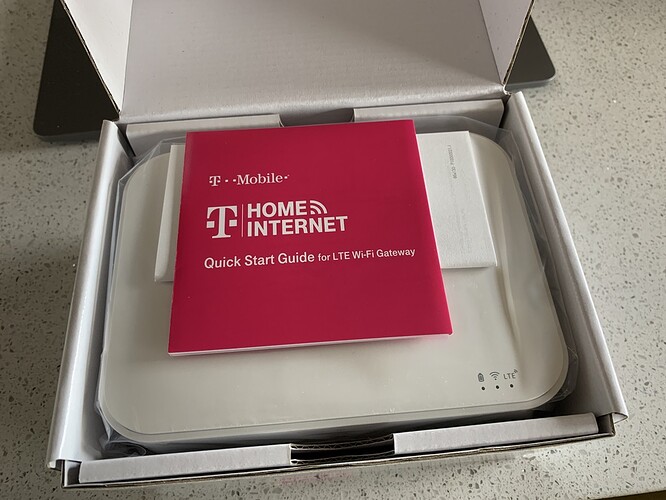 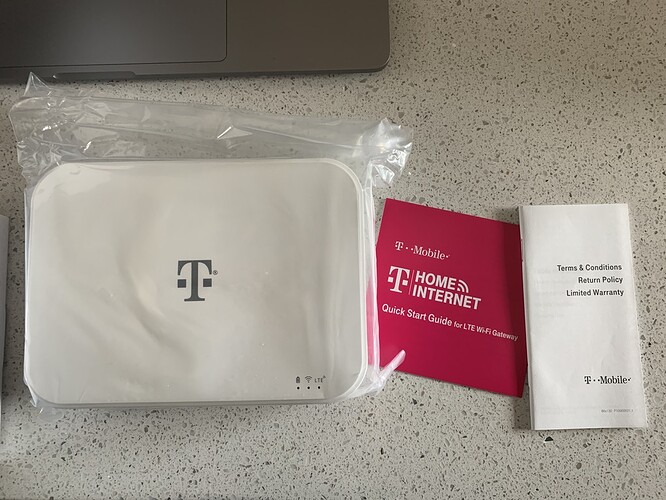 T-Mobile was kind enough to include a screwdriver…
I had no clue it was going to have a battery backup, awesome! 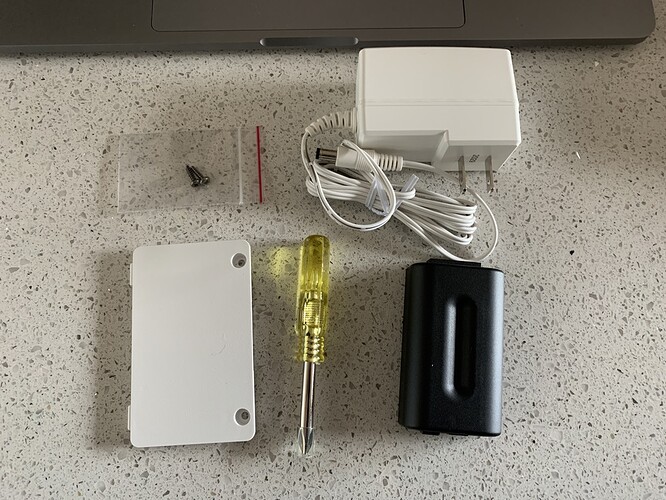 This thing is an absolute unit. Awesome design, I really like the way it looks. 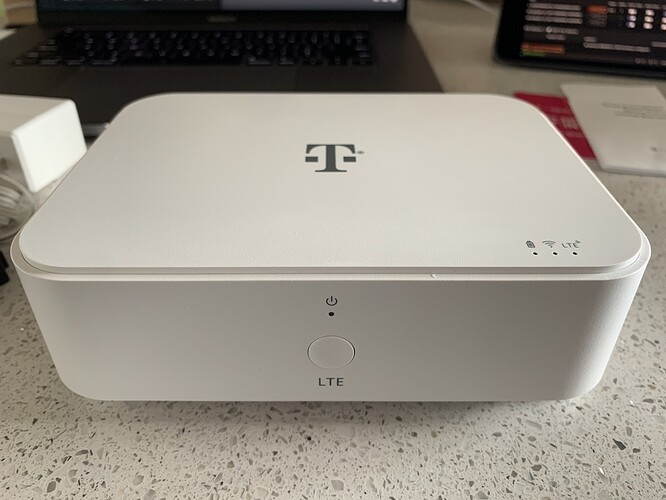 Interesting that it has WAN and Phone ports. Wonder what else it could be used for. Two LAN for connecting devices/access points. 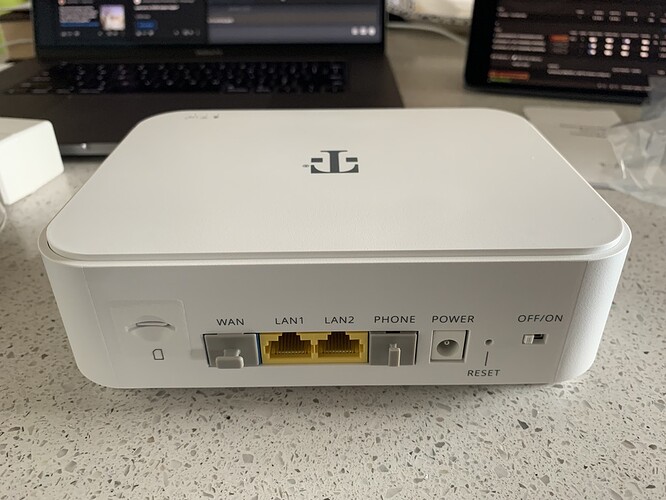 SIM card is taped in… interesting. 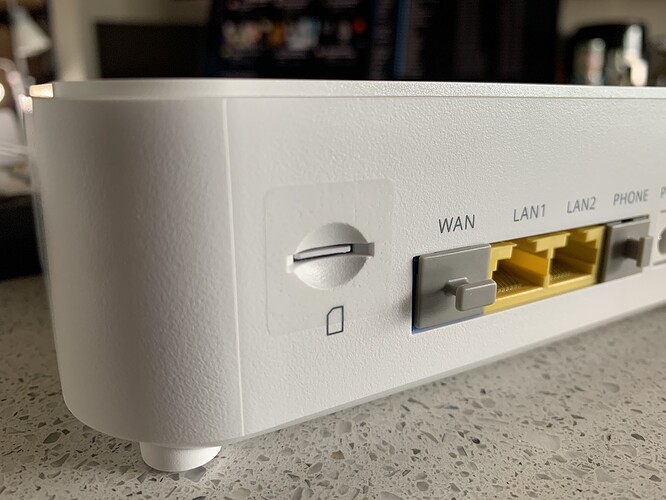 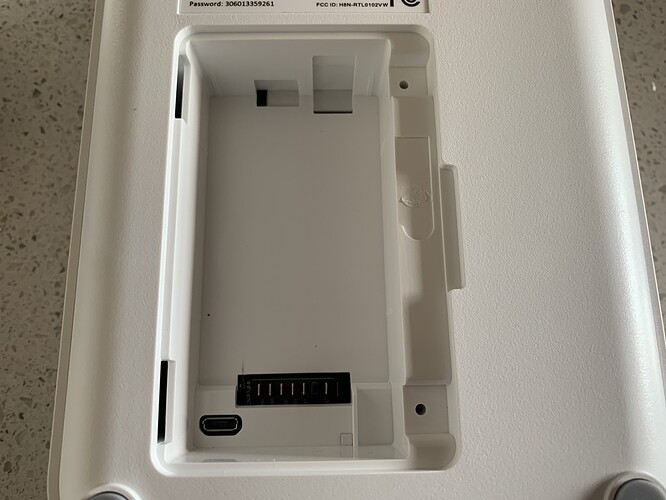 Boots up without wall power! 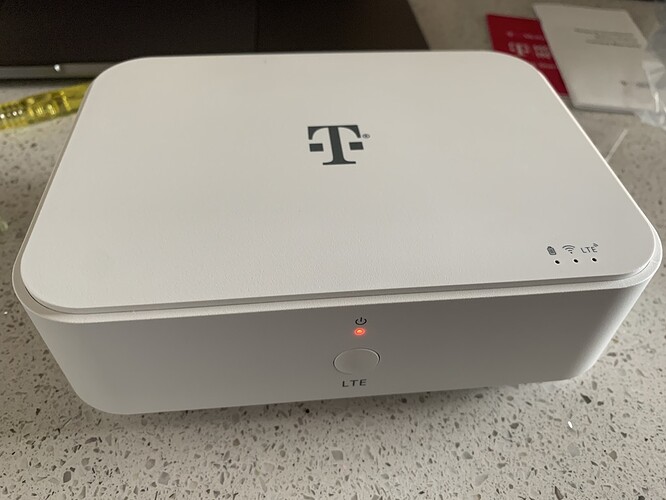 All lights green after just a few seconds, meaning we have full LTE/Wi-Fi service. 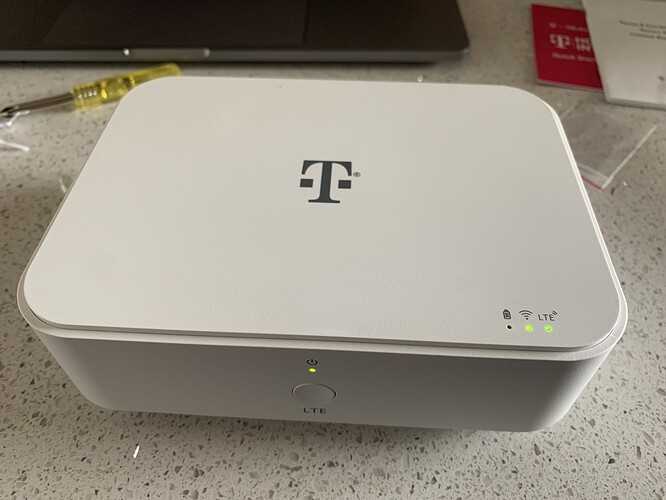 Test 1 - from box to speed test

Without any configuration or optimization, here are my initial test results using my MacBook Pro 16" (2019) with built in 5Ghz Wi-Fi on the T-Mobile modem.

Impressive, to say the least!

Looks like it’s settled in a bit. Speeds are really great!

i really need to stay of this site. i end up spending money. haha. i just checked and it’s now available at my house(wasn’t available 2 months ago when i checked). i almost called them but i decided to wait and see what updates you have for us. i’ve been looking at getting a lte setup for fail over for when comcast takes a crap. assuming the best outcome, would this be able to be connected to a pfsense box as a failover connection?

You’ll be able to connect it to pfSense via multi-WAN with no issues. The only “problem” I foresee is that the router might not be able to do modem-only mode, which would cause a double-NAT on your network. For a backup connection I don’t see it as an issue, but it might be in edge cases. If you can deal with that, then it’ll be good to go. I’ll be sure to test it, though!

I’ve been running this for about a week now in front of an USG with no problems. I used DHCP with IP allocated and then turned on DMZ for that IP. All my cloud based apps connect without problems but it does have a high latency.

I have been using T-Mobile for my home internet since March and without it I would not have been able to work from home. I am only getting about 40 down and 15 up, but that is a big improvement from Frontier. I would highly recommend if it available in your area.

Awesome! Have you messed around with placement of the modem at all?

Once you get the battery charged up you can unplug it and walk around to find the best place. Best I could get was 3 bars and I get 50-60 down.

All this just adds to the temptation. I actually got a call from “t mobile expert” Monday about getting started and answering any questions. Basically said that I have a crappy cable isp(Comcast, shocker) and was looking into their home internet as a backup for when Comcast goes down. I asked if I could set it up as a modem only and she wasn’t sure but said she could give me a $50 credit to cover the device for a month and if it didn’t work like I needed I could send it back. This was really REALLY tempting but I have a tendency to forget things like that and then bam, new tech. Might call back and see what they can do. And she wasn’t sure if I could use it as a modem only,didn’t think they’d have the answer, but she was super nice and overall very helpful.

Do you have any questions for me about mine since I have it on hand?

Jealous. As always, unavailable out here in the wilds of Elbert County! LOL…

I have tried multiple spots in my house and where I have it gives me the best speeds. My main problem is majority of my house is made of cinder block except for my living room. Also, some have asked about traveling with it and I have taken on a couple trips and works great. I live in central Illinois and have taken it to Virginia which had to reboot a couple times, but other than that had internet the whole trip.

Just saw the picture and test updates. Seems very promising. Curious as to the speed increase over time, what would cause that? Are you able to use both lan ports as redundancy if a port goes bad? Can it be used in failover/load balance with pfsense or is going to be a double nat setup like you mentioned? I like the built in battery, will definitely come in handy during hurricane season. What’s the physical size? I’ve got a 2u shelf for the hp 290, would that work or would a 1u work as well?

Any more updates on this? I’m looking at switching over, I currently pay $95 a month for ~100Mbps down and ~12 up. Have you tried using it modem only? I already have a router/access points, so I would like to keep that same setup, just use this as the modem.

Is the data depriorotized after 50 GB or any warnings/notifications sent after that threshold is reached?

So this is for new T-Mobile (or Sprint) customers only?

SIM card is taped in… interesting

Is it IMEI locked then? What happens if you take the card out and put into your unlocked/T-Mobile phone? Are the speeds the same?

but the device is geo-restricted

OK, so the device enforces the restriction. If the SIM card is not IMEI locked, this could be used in a pinch.

I don’t believe data is prioritized, but I haven’t looked into it much.
I believe it’s IMEI locked, which isn’t a big deal IMO.
I took it on a recent trip with me to NC, it worked great.

I took it on a recent trip with me to NC, it worked great.

Interesting. So it turns out the SIM cars is IMEI locked but the device does not enforce GPS.

When I talked to T-Mobile, they said it is officially geo restricted and that some people have success traveling with it, some do not. They provide no guarantee of service outside of the area that you signed up for.