It’s possible the PSU is bad, but to me it sounds like it’s overheating. Is there a way you can monitor temps?

I had that thought too, but having to physically unplug the power cord before it would power on again made me second guess that. I’ll figure out a way to monitor temps and start a few streams and report back. Thanks for the quick response!

unplugging it fully I believe discharges the capacitors and it will take off and go again. Unplug it and hit the power button for a few seconds.

I have an older computer that did that. It might do it once every few months…I figured out I could unplug it and let it sit for a few minutes and plug it back in and it was good to go. I’ve since hacked into it and changed out the fan motor and I don’t think it’s had any issues but I don’t use that psu very often now days.

the one @LivePono linked looks like its the exact same item from a different seller and is currently $22.30 with free shipping from California. so dealers choice here which ever is closer to you

Wondering if anyone can help me out. I just bought one of these HP 290s under the impression that it would be a great little transcode box – but on my first attempt, it’s maxing out the CPU transcoding three streams. I have Hardware Acceleration enabled in Plex and Tautulli is showing that the streams are indeed being transcoded via hardware.

Upgrades to the stock 290 were moving to 8GB RAM (the brand recommended in the OP) as well as a 1TB nVME, which is where Ubuntu and the Plex metadata will be stored.

Can someone help? Is this expected behavior? I was under the impression that I’d be hitting upwards of 10 simultaneous streams, no sweat – but perhaps I’ve misunderstood the capabilities of this box. The goal is to build a server capable of transcoding about 10 simultaneous h.265 1080p streams.

Edit: Images from Tautulli and the Plex dashboard: 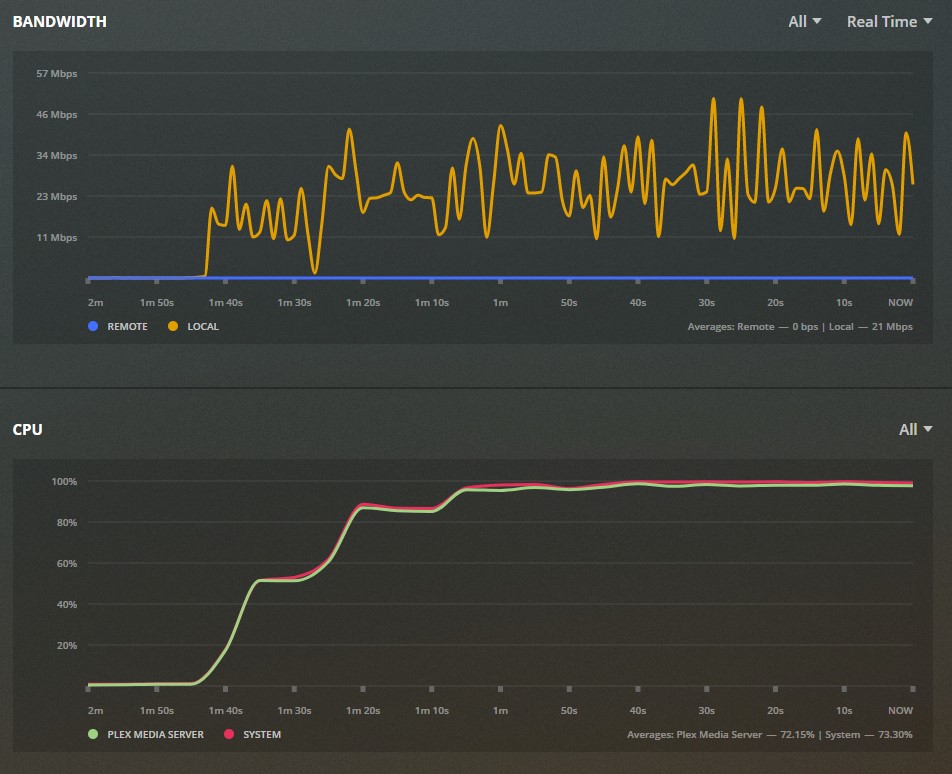 Are you running all default settings in Plex?

Other than enabling hardware acceleration, yeah. This is a fresh install.

Have you tried it without subtitles?

Good call – lots of my shared users use subtitles, which I why I kept it enabled.

Disabling subtitles does result in a significant reduction in overhead – 10 streams took us up to 90% utilization, which ain’t too bad – though Tautulli’s putting my transcode speed at anywhere from 0.7 to 1.3, which I’m not sure is gonna be sufficient to serve these files consistently without buffering.

I didn’t realize the Subtitle burn required that much additional horsepower. Is there any way to reduce that load?

Doing some additional testing on my current system – the VOBSUB burn has a huge impact on CPU usage, far beyond what I’d expected.

This other box is running an unlocked 1080Ti with a Threadripper 1950X (HW acceleration enabled in Plex) – the subtitle burn doesn’t seem to impact the work the GPU is doing at all, but is adding a ton of work to the CPU (up to 80% utilization @ 10 transcodes). I don’t fully understand why that’s the case.

EDIT: Further research on the Plex forums shows that image-based sub encoding is a single-threaded process that occurs on the CPU. So that explains it.

Seems the smart move would be to scrub my library to replace all image-based subtitles with SRT alternatives (which does not sound fun); or do something like add a P2200 to my Proliant DL380 Gen 8 instead of using the HP 290 (so there’s CPU power available, should it be needed).

EDIT: After further reflection, the HP 290 doesn’t meet my needs (family Plex server, 1080p h265/h264, various subtitles and non, up to ten streams). Nothing wrong with the box per se; I think I misunderstood its capabilities. Probably around 20+ 1080p h264 or 12+ 1080 h265, so long as no image-based subtitles need to be burned – which drops the capability significantly. Definitely an edge case, but just leaving this here for anyone else who is in a similar situation.

Can you explain to me - what is the difference between SAS and SATA? Found only this review https://differencebtwn.com/difference-between-sas-vs-sata

Well, you can always upgrade the CPU. I think you could use a subtitle format that doesn’t require CPU transcoding…

Here’s a really good write-up of the differences:

SATA and SAS connectors are used to hook up computer components, such as hard drives or media drives, to motherboards. SAS-based hard drives are faster and more reliable than SATA-based hard drives, but SATA drives have a much larger storage...

Just to follow up, I did check out the temps and everything seems fine. Never saw it get above 53C. It happened twice during a span of a couple days but hasn’t happened again since.

There’s a ton of construction in my neighborhood, my best guess now is that something related to that caused my power to blip out momentarily or maybe surge. So the plan is for the moment is to get a ups (any recommendations for an affordable 1u ups would be appreciated).

I also picked up two more of these bad boys at $117 each. One I moved both the 4gb stick of memory into, only because I didn’t have another use for it. Added an Intel 4 port nic for $20 and disconnected the wireless adapter. That’s just running pfsense.

The other box got the two 8gb sticks of memory, and a 500gb m2 drive. The plan is to to use it for home assistant, open vpn and some other lower power utility services, plus some experimentation stuff for my software engineering hobby projects.

Hey guys I am finally starting to play with this great little machine I bought months back.

Question: do I need to do anything on it to enable Quick Sync to work?

Tehniemer was nice enough to help me out because I am using this machine for Blue Iris, but I am unable to get Blue Iris to recognize and use Quick Sync. Is there some setting I need to enable or some way to check that Quick Sync is actually working?

I am working on trying to find a program that I can run on the HP 590 that uses QSV and see if it works with that program. On my old i5-3570k I had a GPU and tried hard to get it working about 3 years but had to give it up because it would sometimes work and sometimes not, was wondering if there was some setting in the limited BIOS that i needed to enable or if QSV was auto enabled since there is no GPU other than onboard.

Hi just wondering if anyone has gotten plugins to work? I have tried Sub-Zero for subtitles but it doesn’t seem to work no matter what I do.

running it on ubuntu desktop as shown in this guide…

just want to say thank you to the community, my HP 290 is working flawlessly and I share my plex with at least 20 friends, no issues

Plugins are deprecated and have been for some time now. Plex has built in subtitle fetching. 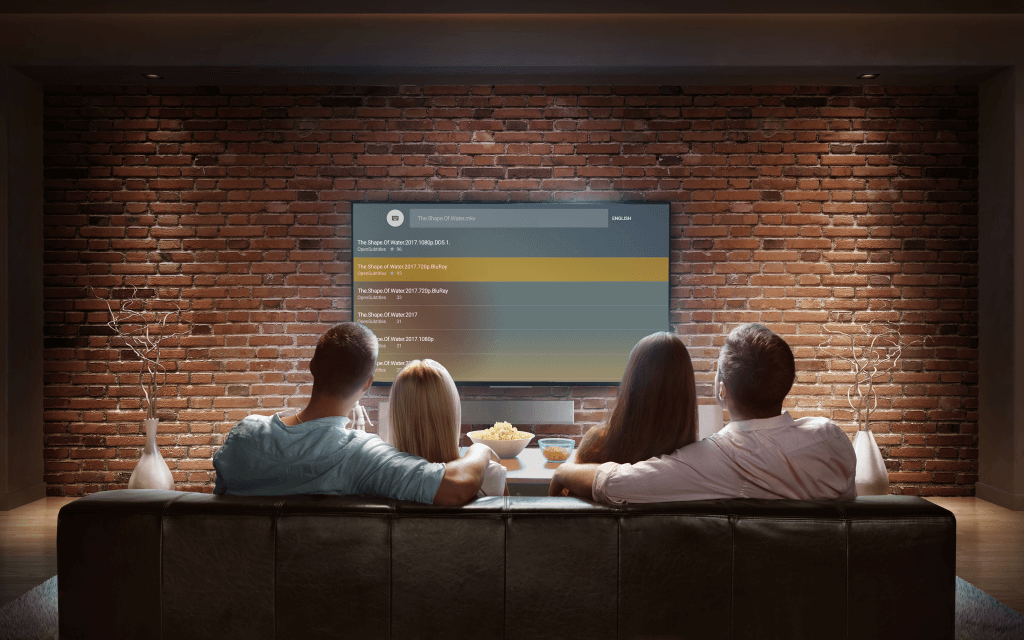 Subtitles and Sunsets: big improvements and a little housekeeping | Plex

Hi! This blog post is dedicated to you, the devoted user. The one who’s been with us since early days,...