Welcome to my first time ever building a PC, let alone a server/NAS-type box. I have been chatting with a bunch of you on Discord and asking question after question that I could probably solve with Google Fu, but you’ve been amazing and so helpful. I decided to build a NAS Killer 4.0 based on the needs for my server and all of the parts are almost here. In follow-up posts, I’ll talk a bit about what the needs are from this box + provide updates as I put it together. So without further ado, let’s get started.

1. What I need this box to do (Server Wish List/Needs):

This box needs to primarily be my own personal NAS, but also a server with a varied list of applications that need a ton of uptime. Almost all of these were running on my old Pi cluster and will now live on here.

Since I’m finally building my own server, I want to make sure I have:

So here’s the plan:

2. My existing setup (and general architecture):

Enjoy my lovely drawing skills. Here’s my home office setup. The blocks on the left are this IKEA shelf if you need an idea of scale. 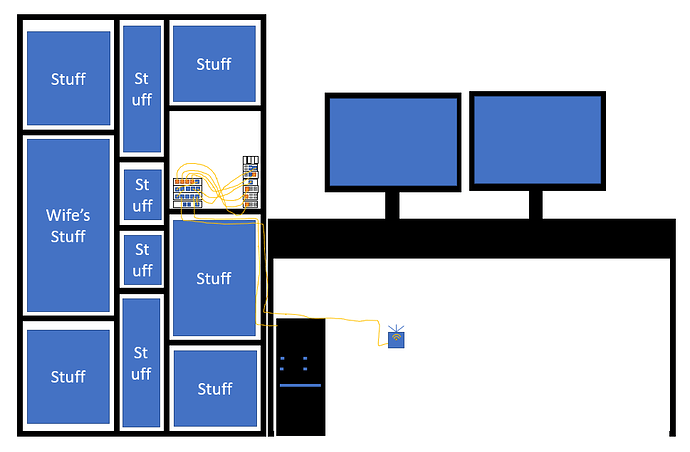 Currently, my NK4 (finally built so it makes the drawing

) is the black PC on the bottom.

Working backwards from the network, here’s what we’re working with and how it’s set up:

So that’s the network. Now for the cluster. This project originally started as just a BeagleBone Black, but grew to eventually be a small SBC cluster. Here’s what we got:

That’s a long list. This project was capable of hosting all of those docker services above + a pair of PiHoles and Wireguard. I mainly had issues with storage which is what this project needs to solve. Finally a bona fide NAS will actually allow Plex and Nextcloud to run continuously.

The way these boxes ran before was as follows:

The cluster’s focus was high availability of these services, so I used glusterfs + NFS shares to spread out data so if a node failed the services would degrade but at least keep running. This worked in a fashion, but the central location of the MariaDB instance + the file storage killed most services if the ODROID went down or the USB acted up (which happened frequently)

You should change your HDDs to price/TB, that’s what we use here.

Just changed it, and cool! I’m taking a break for dinner but should have some more stuff up later tonight

So most of the parts are here, time to start this build for real.

First thing to show up was the case which I immediately started plugging drives into: 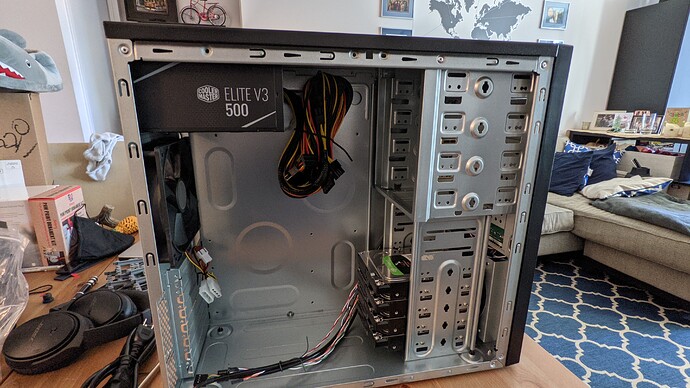 Although, my first batch of SATA cables were right angle, so I decided to rearrange them a bit.

I’ll be updating this topic with more pictures as I go, but depending on when this mobo gets here, I’ll either have pictures up today or on Monday night

I’m curious, was your previous experience Unraid or FreeNAS? I use Unraid a lot and it’s really great.

Actually, I have no experience with either believe it or not. Most of my experience with Linux has been with my little Pi/ODROID cluster (that I need to fill in info on up above I just remembered). So for that I’ve been running mostly Raspbian Buster, some Debian Buster, and Ubuntu Focal/Groovy.

I don’t really have anything against Unraid or FreeNAS specifically, like you said I’ve heard from many people that they’re great. I just really like the regular linux experience having spent 2-3 years learning how to build a small compute/docker cluster on it.

I’ve also been hesitant about being locked into a proprietary platform (even if it’s based on Debian Linux). My biggest issue with the ODROID/Pi cluster was that it was 32-bit/64-bit custom ARM architectures, so if the device makers/community didn’t feel like supporting a package (like ZFS) then I was forced to compile it on my own and deal with the headaches of supporting it myself

You should really give Unraid a shot then. You can have dual parity, along with the ability to use various drive sizes and add drives one a time.

Ok, first thing to go was the stock case fan, replaced this and the other one with the Arctic P12s. I decided to go without Power Sharing on these since they’re on opposite ends of the case 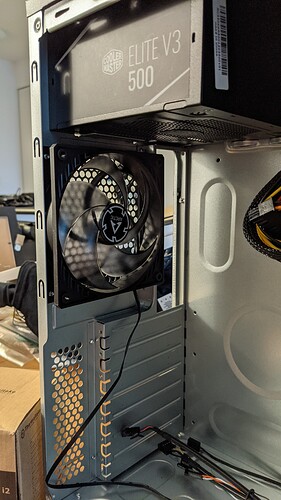 Next, we add the Icy Dock to hold those 2.5" SSDs (second one gets here tomorrow) 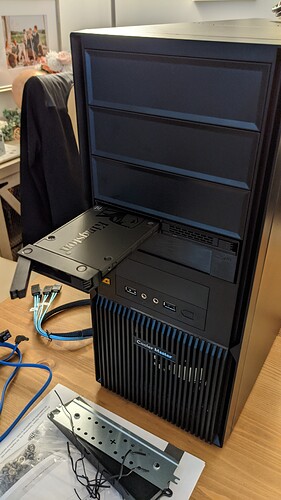 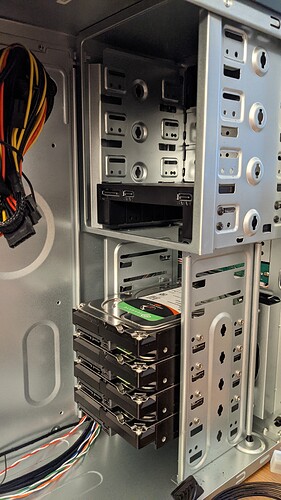 So far so good, pre-running the cabling is coming up next 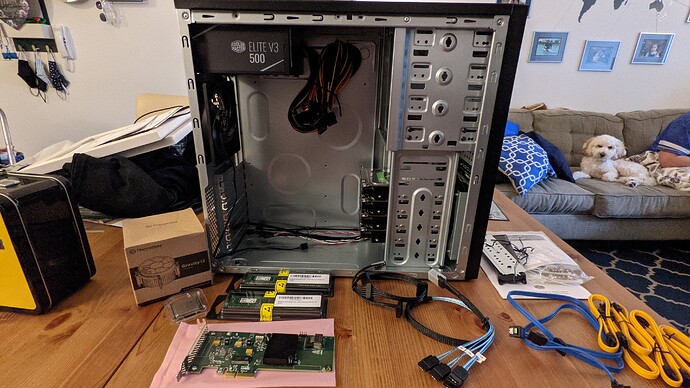 Oh and bonus puppy, his name is Whiskey and he’s very tired

Pre-running cables now, I have 8 drives total, so planning to use the LSI card + 4 SATA cables. Until that second Icy Dock arrives though, best to just hold 2 cables back. 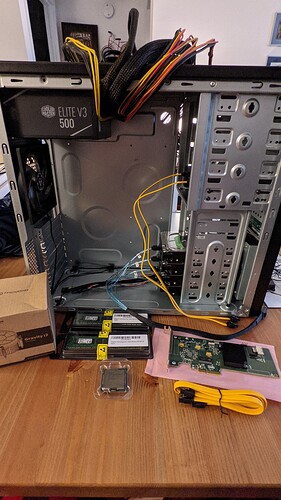 Ok back to building! Finally back home and that pesky motherboard finally got here! I decided to go with the X9SCM-F for the port combos + Supermicro still seems to be supportive of this board all these years later. This is the board standalone finally awaiting that CPU 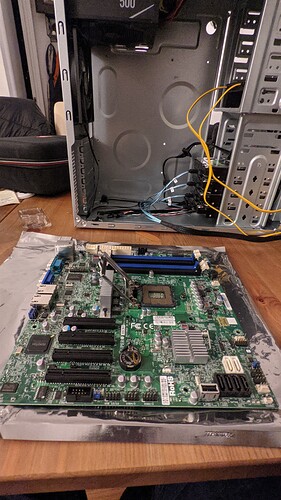 For the CPU we’re going with an Intel Xeon E3-1230v2 for some good performance at a slightly lower cost than the E3-1270v2. That’s going in next. 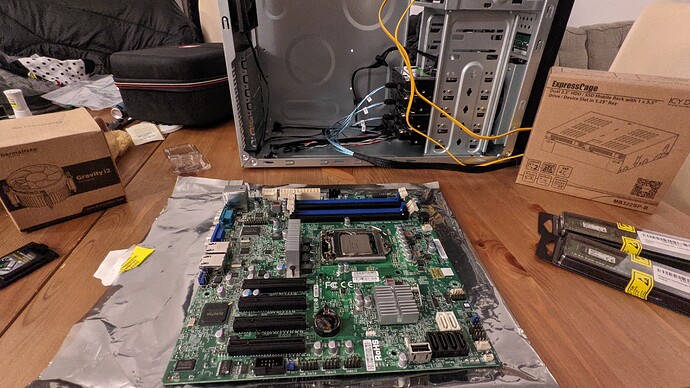 Now that our CPU is in, my next job is the CPU fan. For price, I decided to go with the Thermaltake Gravity i2 since this chip doesn’t even reach the rated 95W TDP we should be fine. Also, this was my first time installing a cpu fan so thanks @JDM_WAAAT for that NK4 build video which I used for reference! 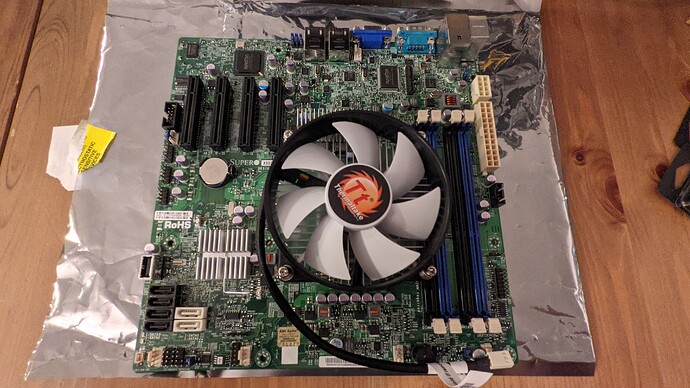 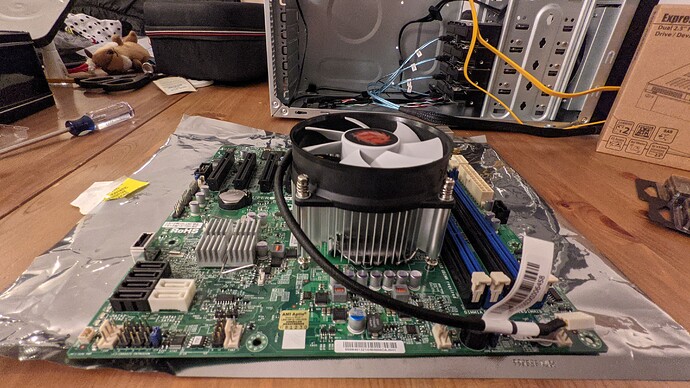 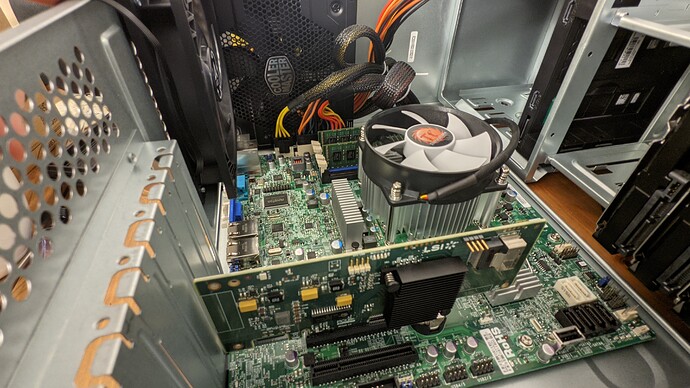 The process took longer because I had to figure out that the Supermicro X9 motherboards have a limited option ROM, so sas2flsh.exe fails on FreeDOS. The solution was to use the UEFI flashing method using the built in EFI shell. This worked like a charm and we’re now fully flashed and back to building!

Ok now that we’re back on track. Installed the second Icy Dock ExpressCage and reinstalled the front cover, now to start cabling things up! 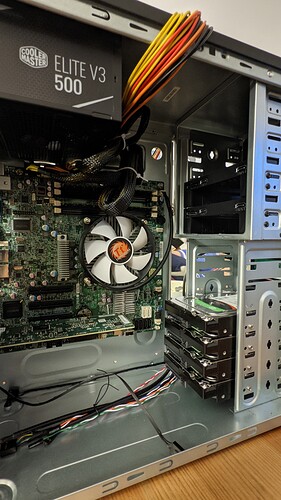 Woohoo! Took a bit, but now all cables are plugged and we’re ready to go! 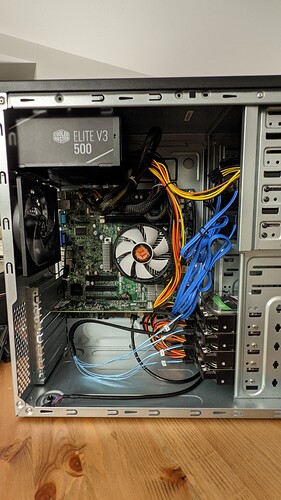 Cable management isn’t my strong suit, but I did my best 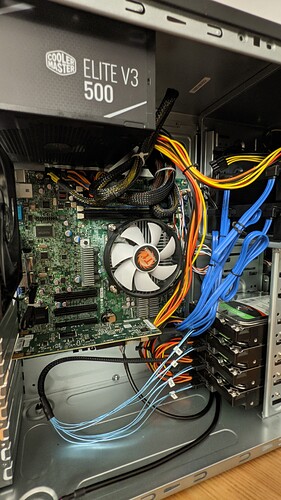 but I do have some hazy plans for the future

I have thought about getting a 6x2.5" adapter for one of them though and setting up a bank of SSDs. Otherwise I’d likely just add more of the same 1x3.5+2x2.5 adapters.