New to forum; Looking for input/advice on my server

Not sure which section to post this in so I’ll try here.

I chose Win 10 for 2 reasons - familiarity and RDP. While setting up some extra stuff like Nginx for Organizr I started to regret that because all the support/documentation was geared towards Linux but I implemented a number of workarounds (and naturally haven’t the foggiest idea what I did 18 -24 months ago so here’s hoping it never dies).

I’m coming up to a point where my 6TB is filling up. Probably within the next 6-8 weeks I’ll need to install a new one, so I figure this is as good a time as any to take a step back and decide whether to change my hardware/software setup or just add another drive and keep going.

Here’s the documentation for the server:

I had a read it before purchasing the system and, not knowing any better, thought the 6 SATA connectors on the mobo would be more than enough for my drives. Well they’re severely hobbled - I’m only getting SATA I or II speeds. I guess they were intended for Optical Drives only (who tf needs 6 ODDs).

I could hook up another HDD to the SATA ports and continue with the setup I have although I’m out of SATA power cables so I would need a SATA splitter which I’m wary of.

I’m looking into getting an LFF cage and a SAS HBA card but I’m not really sure what I’m doing.

Then move all my disks to the cage and have better cable management and hopefully speed?

Alternatively I could just buy/build another system. I know the HP 290 is well regarded here but it only has space for 1 internal 3.5" and I would like at least 3 so I would need another machine purely for housing disks which is not ideal. And I would probably end up buying an SAS card and drive enclosure as well which is back to square 1.

EDIT: Well I did a bit more research (I guess quarantine is good for something) and spent some money, hopefully I can get it all working and I didn’t buy crap that won’t work! $80 Canadian (around $55 US) for the LFF Cage and a Dell H200 flashed to IT mode. Not enough of a spend to build anything better with so if it works out I should be happy for the next while - 4 more 3.5" bays than I currently have at least.

One of mine is the same base setup, ML350 Gen 6 that I got for craigslist for a steal. I ended up putting an icy dock a three-bay 3.5" in two of the open 5.25-in bays. Along with the SFF drive bay that came in running on the standard backplane. I threw in another PCI SIIS SATA controller card that I had laying around because I wanted to keep the OG SFF setup running. It’s a pain in the asterisk. I also have a flash use the PCI slots instead of trying to use the motherboard because it is quite antiquated. I really don’t have anything important going on this computer right now, but I would love to get that up as an ass later. I did upgrade mine with a second process from ebay and I had a few 16GB sticks of RAM laying around and a local guy on CL was selling 72 2.5" drives for $100, so I picked that up too.

Basically, I turned my cheap, CL server into a money pit!!! 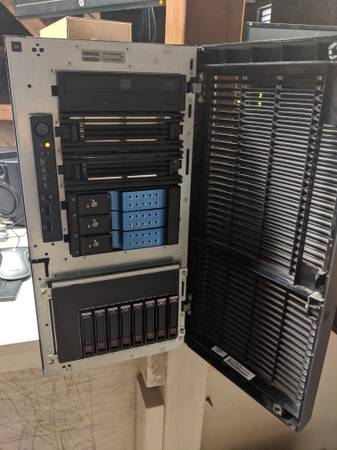 All of these machines are money pits. I think that’s kind of the point of this hobby

I also have a flash use the PCI slots instead of trying to use the motherboard because it is quite antiquated.

Would you mind explaining this to me? I’m not sure what you meant but it could probably be helpful

I picked up one of the F80 - PCIe SSDs so I have 4 200GB drives available as well, but I cannot boot from those. They are basically cache drives for my vms/downloads.