I tested both SATA m.2 drives in each HP, and neither was recognized in either HP. I then tested the SSDs in a known good computer and they’re both totally fine. Additionally, I tested a known good NVMe SSD in an HP and it was also fine.

There aren’t many settings in the BIOS at all, I tried disabling Secure Boot but there was no change in drive recognition.

Are the HP 290-p0043w just not SATA m.2 compatible? If I only had one HP I’d still be wondering, but it does seem like more than coincidence for two to behave identically. Hoping to get word of how others are fairing.

Note: I tested and could not see the m.2 SATA drives with: bios,

From other comments I’ve been seeing about this neat little pc it looks like m.2 sata drives just don’t work period. Maybe it will be enabled in a bios update?

I gotta go home tonight and check the BIOS version. None of the BIOS notes on the Support page mention anything about SATA compatibility but I guess that doesn’t mean it won’t fix it. I don’t know why the most up to date BIOS version has three different simultaneous versions listed but, I’m sure I’ll find out.

My HPs are on 843F F.22 BIOS, and that board model corresponds with an available F.31A revision. Looks like I have to use Windows to do the update though - it’s some kind of package.

Loaded Windows on the included drive (man are rotational drives slow) and used the utility to update to F.31.

Possibly important note: the computer restarts, then has about three false starts where everything spins up and the computer turns itself off and then on again. I waited to see what it would do because I did not want to risk bricking the thing with a bad BIOS write, and it did come back and boot back to Windows after three restarts.

However, it was all for naught because the system still does not at all recognize m.2 SATA devices.

FWIW it could be this m.2 “keying” issue they’re talking about over here: 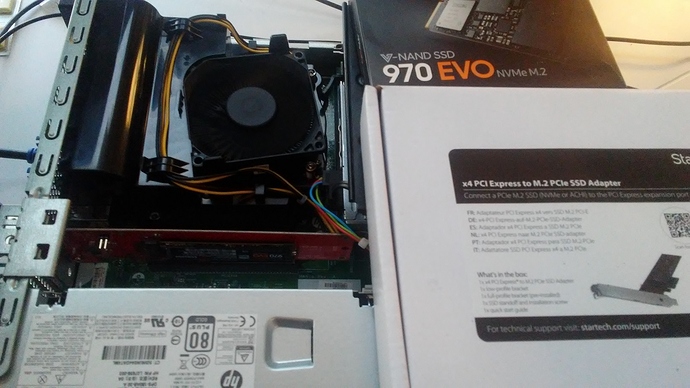 I found a thread about adding an m.2 SSD to this desktop. This is a new post about the same issues.  I bought a Crucial 1TB SATA drive and plugged it into the m.2 slot on my HP SLimline 290-p0014. The Bios wouldn't recognize it. I was...

Those people do not know what they are talking about…
The issue we are trying to trouble shoot is SATA M.2 SSD, not NVMe SSD.
The box will accept NVMe SSD of any key type, but will only negotiate at 2x. Not a big deal, still super fast.

To make things very clear for folks like me who are hazy on the difference between NVMe SSDs and SATA M.2 SSDs:

In other words, if it’s not described as an NVMe SSD, it’s not gonna work.

And, as noted before, both m.2 slots each have two PCIe lanes, not four as many slots on other boards will have.

So I’m tinkering with this HP 590-p0033w that I got. It came with a NVME m.2 2280 Intel 16gb drive already installed. This is recognized in both Windows and also in the Bios but is not seen in Linux.

So I’ve been searching around on the googles and so far I’m seeing a lot of terrible information. I’m using a m.2 NVME in my 290 but I can’t really recall what I did (If anything) to make it be seen by Linux.

Could it be that I have to get into windows and wipe it clean before it can be seen? I’ve seen some instructions that it has to be set to AHCI but that option is not found in the Bios.

I updated the Bios firmware to the latest version from 6/20…I think it’s P.43

That drive is a 16GB Optane which is probably configured to speed up the included hard drive. If you were to remove that configuration it would be able to be used in Linux. Although I’m not sure to what end, 16GB is not a lot of space.

Yeah I’m still waiting on parts to arrive. One shipment left california, ended up in Ohio, went back to California, and now supposedly on it’s way again to me in Arkansas. It’s not Newegg’s fault but the last few orders from them has been an adventure.

My only issue was it wouldn’t get into AHCI…I later found out I needed to remove that Optane drive in order to go back into the bios to select AHCI. I assume I will be able to now install the nvme 1 tb drive that I ordered (when it comes) and Linux should see the drive now.

At some point I’ll need to format that Optane drive and probably make a little external drive out of it maybe. Or keep it for a future PfSense build.