If you are running a pfSense/any FreeBSD machine with a Realtek NIC, you may have noticed it randomly shits the bed when under load:

Well, the default drivers in the FreeBSD kernel are older than dirt and god awful (if you mention this to them they get real confrontational), and Netgate won’t touch vendor driver distribution with a 10 foot pole. When the NIC is under load, it doesn’t respond to the software watchdog in time, and is reset. Happens with increasing frequency with a constant load, until it starts happening about 100 times a minute and the connection never comes back up.

As of November 19th, 2020: pfSense 2.5.0+ has a package in the repo for the driver module: realtek-re-kmod ( os-realtek-re on OPNsense). You will still have to perform the /boot/loader.conf steps, but the instructions are given in the shell after you run pkg install realtek-re-kmod. 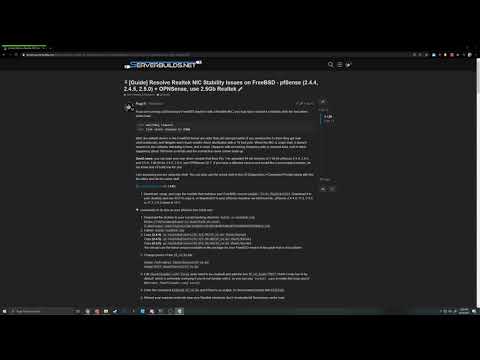 I am assuming you are using the shell. You can also use the virtual shell in the UI (Diagnostics->Command Prompt) along with the file editor and do the same stuff.

2.4.5 was recently released, is there a module available for it? It’s FreeBSD version 11.3.

Probably not, I’ll build one at some point today. It’s likely the other 11.x module will work, generally the major version changes are what breaks em - I’m still gonna make one though.

For this step, the file does not exist previously on my pfSense install. Do I assume it needs to be created? Or would there be another existing file in it’s place?

It will need to be created, as by default there is only the /boot/loader.conf file, and the .local file is a user override that won’t be replaced with updates. nano won’t care either way if it doesn’t exist when you start though. Updating the guide to specify that.

Excellent, thanks for clarifying!

Which version of the driver is it ?

Realtek released the 1.96 version which support the RTL8125B, would you mind compiling this version please ? It to be used with OPNsense.

@Skaarji I made the driver added to Opnsense master and a test kernel build. To test remove or comment out if_re_load="YES" and:

Once I installed TrueNAS initially, I had to use a USB ethernet adapter so that I could get to the UI, do some basic configuration, and get to the shell to make these changes. Once I manually loaded the driver with kldload, I went into the webUI and set the IP address for re0, then I rebooted and moved my cable from the USB adapter to the port above the USB 2.0 ports.

I haven’t load tested it yet to see if it is more stable than my USB ethernet adapter was. I’m happy that the two interfaces on the board now show.

I actually logged on and created an account to say thank you so much @Riggi for the compiled drivers. I had exhausted everything on my FreeNAS box including upgrading to TrueNAS beta to no avail. I was seeing the server drop off after only a few gig of transfers and noticed today that the console was still alive - the whole reason nothing was in my logs is nothing was wrong other than the network driver had crapped out. Followed the instructions as per PFsense and it worked a treat, all stable and solid now! Thank You @Riggi !

Is it possible to get an update for FreeBSD 11.3 based systems?

Tank you so much!!

Greetings from down under.
Thank you so much @Riggi works perfectly in pfSense 2.4.5 (FreeBSD 11.3)
Just created an account for this.

@Riggi if you got a Patreon or any donation link, please share as I would like to appreciate your effort by buying you a coffee/beer!

I’m glad I could help you get it sorted, and I appreciate the sentiment - just recently threw one of these together. Cheers man.