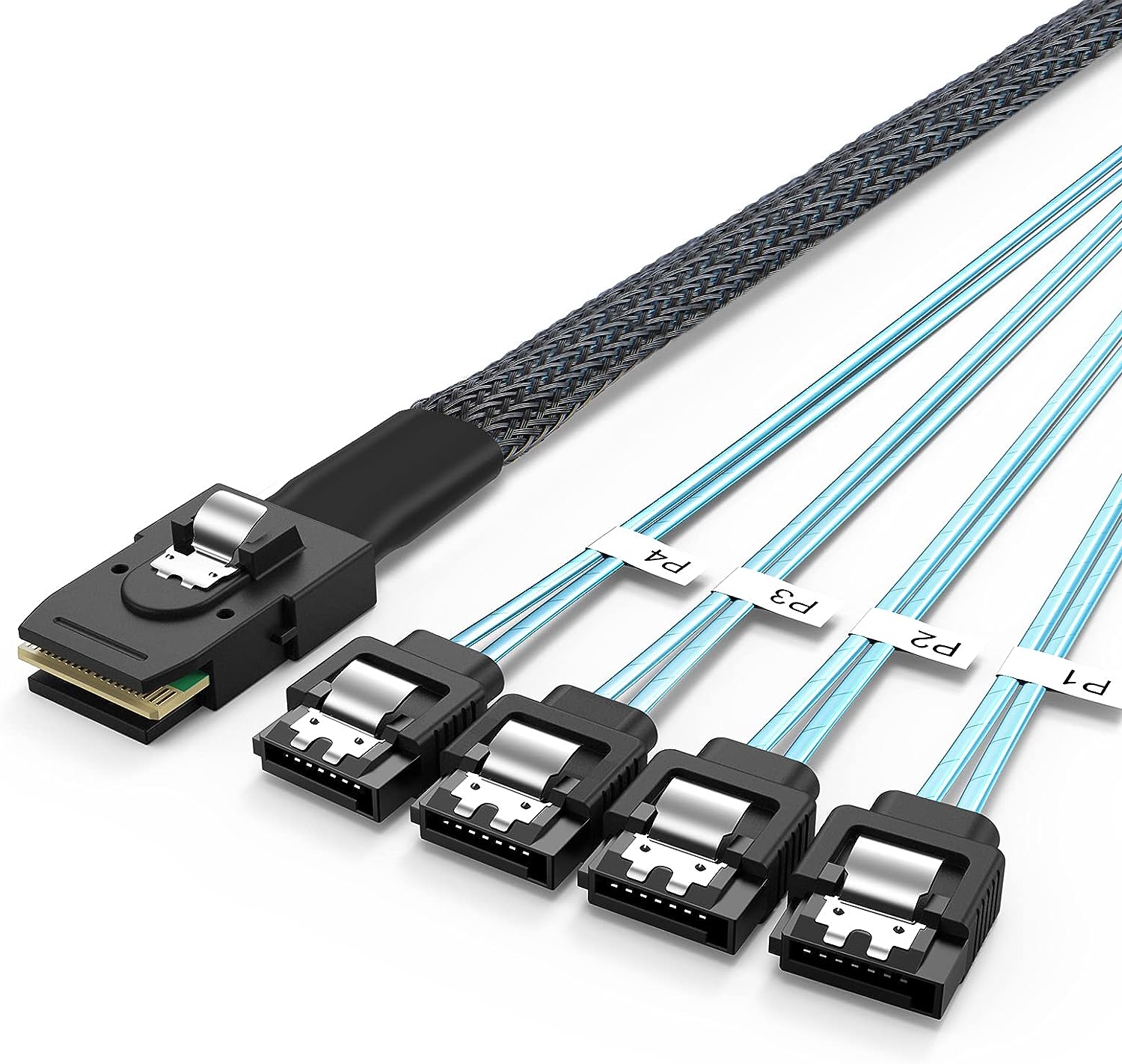 CableCreation Focus to the Ideal Design of All of Our Quality CablesCableCreation is not Only a Brand But Also a Creative Team With Own Factory manufacturing Side 1: Mini SAS 36Pin (SFF-8087) Male with LatchSide 2:4x SATA 7Pin female with latchCable:...

But listing says it is for SATA drives, anyone know if it is for both SAS & SATA?

Followed this link, was assuming it would be both SAS/SATA:

It carries a SAS signal, which can be used on SAS or SATA drives. However, it will not directly fit SAS drives because their power connector and data connector are molded together into one.

It will work perfectly fine with SAS drives in SAS backplanes that use this type of connector (like the U-NAS), for example.

Can I ask what hardware you are trying to use?

This would be for an OTiS build.
Chassis: Chenbro SR301

Chenbro SR301 with 250W PSU I messaged the seller, it has the SAS backplane, which means SFF-8643. Now, to me that’s kind of goofy because most of us have x8 SFF-8643 cards which are dual 12gbs (except for that one HP card). Doesn’t mean you can’t get a 8643->8087 cable, but add that to the list of cables lying around. So, interesting chassis, I’m likely holding off though. I think in the right context, this is a steal. I wouldn’t design a system around the chassis, moreso use this to cobble …

HDDs: At least 2x SATA, would like flexibility to mix/match SAS/SATA

Those cards are fine, but no SAS controllers support SATA TRIM as far as I know. So just use the onboard SATA ports for that.

Okay, thanks.
Source of that TRIM info was some other forum post (not serverbuilds), so probably not accurate. Wouldn’t trust them over you.

Makes sense, thanks for the help.

I have sas ssd’s in unraid on an LSI controller. I have an adaptec controller also.

From what I’ve read, the reason TRIM is a problem is because the bytes move around the drive and it screws up parity calculations. Unless the drive has the two technologies (I’m too lazy to google it, but DRAT or whatever). This is rarely published as a feature for drives.

It’s well written for Unraid that LSI is an issue. I’m wondering if it is a problem on an Adaptec controller also.

I have yet to come across a motherboard without SATA ports. I’m not sure why you wouldn’t use them for this purpose.

Was this for me or Joel?

If this was for me, my reason to use SATA drives on the SAS/SATA backplane is for utilizing the hotswap bays.

I expect that I could still do the above but wiring just the SATA drives to the mobo SATA ports instead?
If that’s what you mean, then reason I wouldn’t want to do this is because I prefer to not remember/care which drive bay is which, just pop in whatever new drive without opening the case to rewire. That, and cleaner cable management, I guess.

Please let me know if I’m off base, still have much to learn.

Edit: In terms of SSD TRIM, I am going to consider using SSD on mobo SATA (in addition to 4x SAS/SATA HDDs) for cache drive or something. That’s further down on my “figure things out” list for now.