Currently, I’m not serving any Ethernet devices… Coworkers only use Wi-fi so it’s not a huge deal right now. With the replacement antennas, I’m getting around 26 Mbps down, 7.5 up. Absolutely huge improvement in bandwidth, but latency is suffering a little (it was testing around 32ms before the switch).

The plan is to rate limit the users via UBNT’s controller software. People love to stream YouTube/Netflix and just take up whatever bandwidth is offered to them. So I’m not going to offer them much. Even then, it’ll be much better than what we had before. Imagine 6-10 people trying to use 3Mbps down, let alone the 1.2Mbps down that we’ve had recently. They don’t seem to understand that their LTE is faster.

I was looking forward to testing multiple wired LTE modems and aggregating them with pfSense. Before I could do that, however - I ran into a serious issue. It’s impossible for this modem to be not detected as a hotspot. Which means that as soon as AT&T sees it connect, speeds drop from good to horrible. Initially I get speeds such as setup #1 above, but within 30 seconds it drops to 1.6Mbps down and 0.5Mbps up.

This setup has been scrapped entirely.

I just got [Test Setup #3] up and running last Friday (12/20/2019).
I’m using a Lenovo S145, booting ROOter OS off of a USB flash drive. I’m using an Amazon Basics USB 3.0 to GbE adapter in addition to the other parts.
Aside from creating the ROOter OS USB, no other configuration was needed to get the LTE up and running. This was by far the easiest to set up, and has been performing well.

Just did a speed test (had a few other applications running at the time) with test setup #3
This is just with the stock antenna setup, not the extended one that setup #1 had. Excited to see what I can get with better antennas.

Might want to look at this. No caps, just launched and comes with box.

I think you can still do this but with this $20 unlimited plan originally created for OnStar vehicles but expanded to OBDII modems.

I’ve looked at it, and it’s not available in our area. I’d consider it as soon as it were available though.

This plan has come and went a few times, and is currently no longer being offered.

About 4 months ago, I signed up for Visible (Verizon network’s attempt to compete with Google Fi) for $40/mo https://www.visible.com/. I was super surprised to see that no joke, I get billed exactly $40.00/mo, and that gives you unlimited talk, text and data, including full hotspot use. There used to be a 5Mbps throttle, but they just removed that and am able to easily get 30-65Mbps on an older iPhone. It actually works really well as backup internet for me, but Verizon is the only okay service in my area, and was wanting to hook it up to better antennas and ethernet. Wondering if that modem would work…

I’ve done a lot of research, and it seems that the AT&T iPad plan is the most reliable, outside of possibly T-Mobile’s new home broadband.

I have been running on this setup for four months now. Using 1-2TB of data a month without incident.

I am using a Sierra Wireless EM7455 in a USB enclosure, attached to an old HP thin client running r00ter. I get between 35-110 Mbps depending on local tower congestion and the time of day. I have line-of-sight to the closest ATT tower which is about .5 miles away.

The only problem with this setup is the strict carrier-grade NAT I sit behind. No UPnP or port forwarding for me.

It’s possible with a VPN, correct?

Yep. I just need to spend some time and get that set up.

Does the GL.iNet Spitz (GL-X750)LTE router you linked above still function using the AT&T plan? I see these manufacturer posted a reply on a question with a Amazon about using with AT&T that it currently doesn’t work with AT&T plans as of 3 weeks ago and might be fixed in 2020.

I’m getting ready to buy the required items to get this setup. 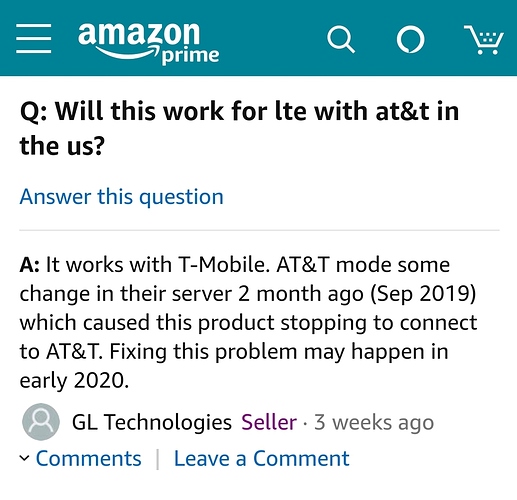 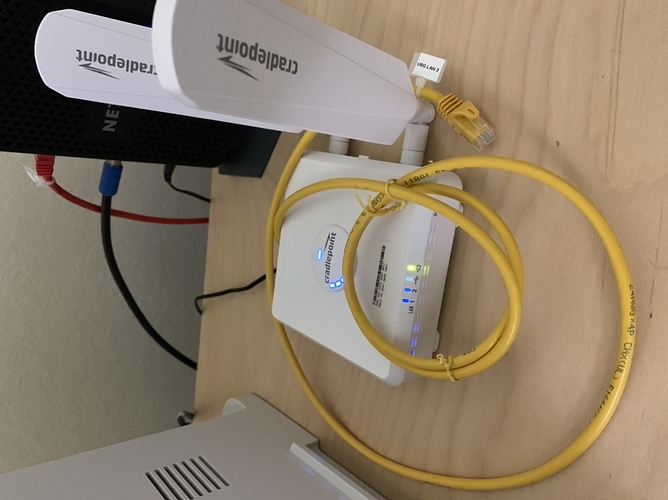 I use a CBA850 cradlepoint bought used from ebay and the AT&T iPad 35USD unlimited as my backup/go to internet setup.

Related: Only problem i face is Ubiquiti’s failover. Once shifted, it stays in the failover.

While at work I started reading more into this kind of setup and found this site.
https://ltehacks.com/viewtopic.php?f=21&t=74

I see the mention using the cradlepoint router and some other ones.

Time for more research on my end now.

I use a pfsense router that I want connect a SIM card router up to for fail over connectivity.

Yes, it works perfectly fine with AT&T. Getting good speeds in my area with low signal.

Added some more information to the thread @D4M4EVER

It’s looking liek i get zero coverage for 4G LTE in my area from all the big providers in my area. i might get a max connection of 2.5 to 5Mbps with AT&T, that is my current speed with T-Mobile off my cell phone now.

I get better speed with my LTE routers than I do with my phone. It depends on your antenna setup.