Finished my build of Nas Killer 4.0 to replace my out of space WD PR2100. I repurposed the (2) 6TB Ironwolf Pro drives in the PR2100 as additional drives in the UNRAID array and also used an existing PSU I had from another system.

Here is the parts breakdown

"*" parts tagged with the asterix were already used in other systems so no price for this build.

I don’t usually purchase products from Newegg, but mainly use that site for research. With the interruptions in shipping due to COVID-19, I ended up ordering the Pioneer SSD and the Enlabs 8087-SATA breakout cables from them. After the price differences between Newegg and Amazon and shipping costs I only ended up losing $5.83.

To do it again, I would definitely look at a different case. I love the look and size of the NODE 804, but it is very frustrating working inside such a SFF case. I question whether you can actually have a full 8 drives on the back side with all the required cables. There is very little clearance between a drive and the PSU on the right. The shuckable drives also only line up with one hole in the hard drive caddies so they move while hanging if you tip the case. Good thing now is with all the components installed, I can much better visualize what needs to be done and length needed for cables. I’m going to take another look at cable routing on the back side once I decommission the PR2100 and get those drives into this case. As you can see in my pictures, those cables are just throw in there at the moment.

On the front the 2 SSD’s are on the bottom mount points. 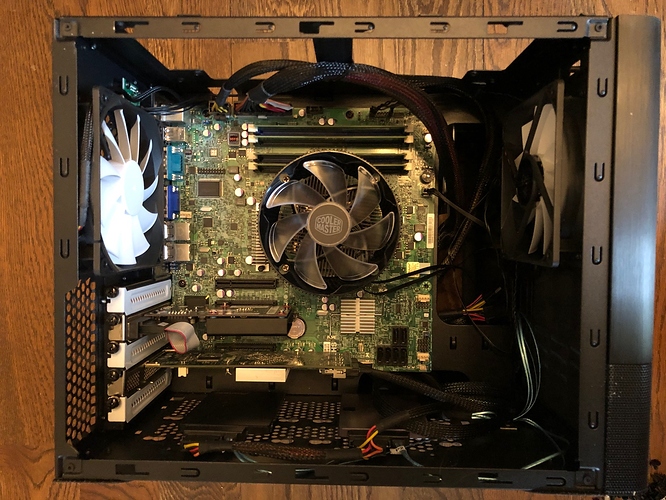 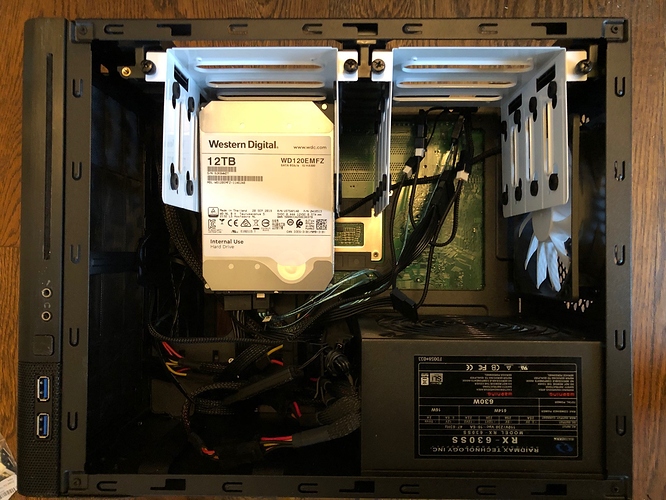 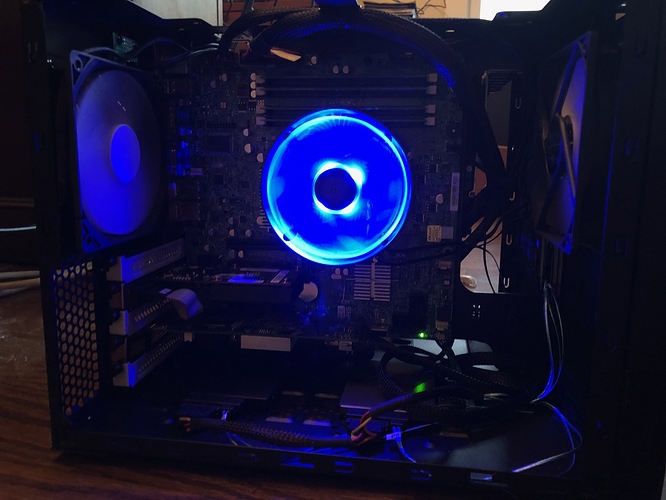 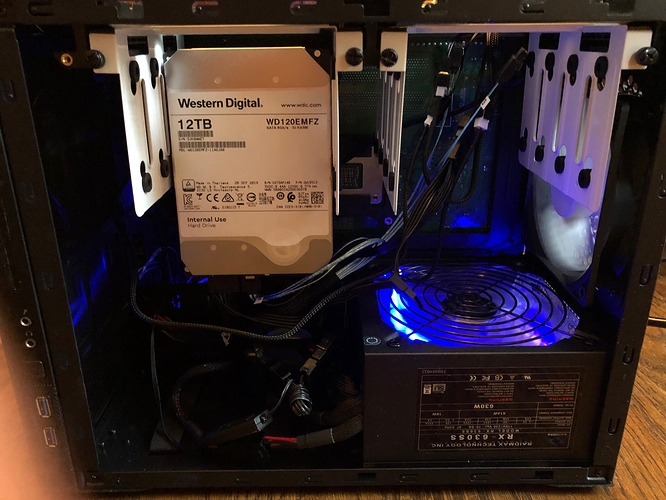 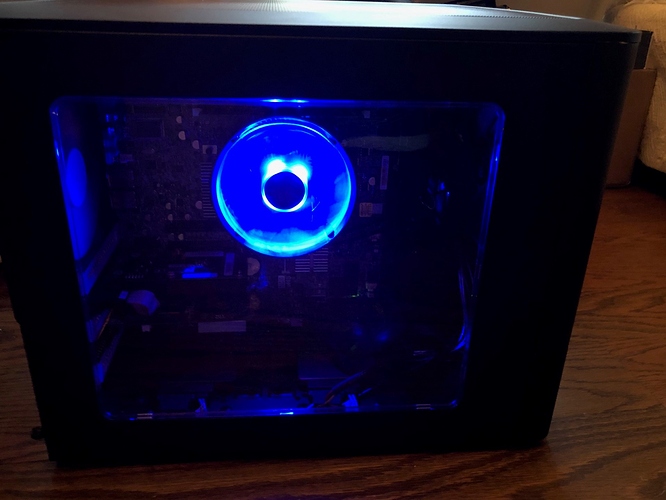 image01919×1439 236 KB
I’ll update more photos of the backside once I move those 6TB drives into this case and re-route all the cables. Thanks to everyone at Serverbuilds.net for helping me. I appreciate this entire community and especially the discussions on discord.

Every time I see a Node 804 used in a build, I cannot help but like it. That’s a fine case. Cool looking build. Liking the RGB.

I’d be interested to get a sense of your use case and how well you think everything is performing.

Thanks for the comment, I appreciate it. Right now my only use is for storage. I currently have a WD PR2100 (2 bay unit) that is both acting as my Plex Media Server & storage (2-6TB drives in a raid 1 configuration) that has run out of space. I’ve had that for 3 years running Plex and storing my media + personal files. I have about 30 Plex users, mostly remote, and knew that it would be more cost effective and have better performance to build my own PC.

As far as pre-built units go, I can’t say enough good things about that WD box. It has really worked well for a long time with no issues. I can update the PMS version as soon as it comes out, the GUI is very easy to use, everything is A+. But, with everyone working at home, my usage has spiked and I have seen the CPU hammered at 100% a lot of the time. I have gotten a few texts about buffering issues, no surprise. It’s still a great unit.

After finding these forums, I picked up an HP290 and have that configured as my PMS server and this NK4.0 is going to store my media and personal files going forward. I’m not sure if I’ll use Dockers or VMs, but it’s good to know it’s there. Right now my main goal is to transition off the WD product.

As a side note I’m also cleaning out my office and doing a remodel in here. So new desk, paint, etc. These devices needed to be small and “nice looking” enough to have the approval of my wife, lol. Days when I work from home, I’ll have 4 PC’s in this office, so yeah. Small form factor was a definite plus which is what drew me to this case.

I’ll update as I continue on through this process. Thanks again for the comment.

Nice build! Looking at building my first NAS and torn between building something similar to this, or going with a 4.1 tower for an easier time. Really like the 804’s looks and size though. Any updates with the 6TB drives in? Any other issues so far?

Might just end up using your build as a template if you like it to be honest. Maybe go with the X9SCM mobo instead for the sata 3 ports.

Also noob question, but is the LSI 9211-81 and the various SAS to SATA cables used to increase the number of SATA ports?

Yep, they also allow you to use SAS drives in addition to SATA drives. Check out the LSI SAS HBA recommendations below:

Thanks for the info! I’m sure you get it all the time, but this site is a life saver. Don’t think I would’ve take the plunge without it!

I haven’t moved the 6TB drives in yet. Once I move over all my Plex users to the new quicksync box (Hp290), then I’ll think about shutting down that old NAS and moving those drives. Since I was going to use the LSI card anyways, I was ok with not having the SATA3 ports on the mobo. What I would have done differently is find a mobo with USB3 headers. This board and I think the SCM might only have USB2.0. I ended up buying a USB3.0 card. I did a backup on my existing NAS to an external 6TB and used krusader (container in unraid, works like windows file manager), to copy everything directly to my array. If you don’t have USB3 headers you also can’t use the side ports on this case.

I chose the 9211–8i card because I wanted the cable connectors on the back of the card not the top. The 9210-8i has connectors on the top near the front of the card (the other options on the link JDM shared were not available at the time I built this, so he has greatly increased the type and models of cards, which is awesome!). It made more sense when having to route those cables to the other side of the case.

I’ve been running the entire system inside my house with Plex for the last 2 weeks and it has been running fine. I have had a couple unexpected shutdowns of the Unraid NAS. I’m hoping it was because the power connector under my desk is extremely loose. I picked up a new CyberPower UPS 1500w which came in Tuesday. I just moved all my components into their final resting place (for now), plugged into the UPS. So I wait to see if that shutdown happens again. I have done all the normal stuff, memtest, drive checks, etc. I’m really hoping it’s just that loose power connection near my desk.

Like I said in my post above, this case is fine but a little tight on the drive side. I needed something that didn’t look like a normal tower PC that would be aesthetically pleasing to my wife, lol, and this fit the bill. One thing to be aware about this case, there is a footer that is part of the mobo tray. See the photos below. It lined up on my board with the empty circle (bottom left). Kinda threw me for a loop as to why it would be permanently attached. I ended up covering it with electrical tape (after a discussion on discord about it) even though it appeared to not touch any components on the motherboard. 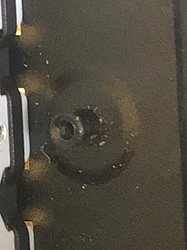 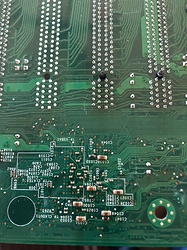 IMG_44961512×2016 1.1 MB
You should get on the Discord Server. These forums are great but you can get active help, almost asap, on discord if you’re running into something, or want to bounce ideas off someone.
1 Like