Yet another mini pfSense build complete

So what started as a total impulse buy when I saw the Intel DQ77KB drop to $50, ended up being a complete pfSense for about $116 based mostly off parts suggested by JDM.

I currently run pfSense virtualized via ESXi and it works just dandy, but I’m tired of cleaning out cat hair (I never wanted the cat in the first place) & dust in my server and killing the internet for the rest of the house.

Since I’m doing absolutely nothing fancy with networking at home, the 2 ports on the motherboard were all I needed, so I was able to save a few bucks on a non 1u case or having to buy a dual or quad port NIC.

I didn’t bother with the IO shield because it’s half height and this case is meant for a full IO shield, but whatever. 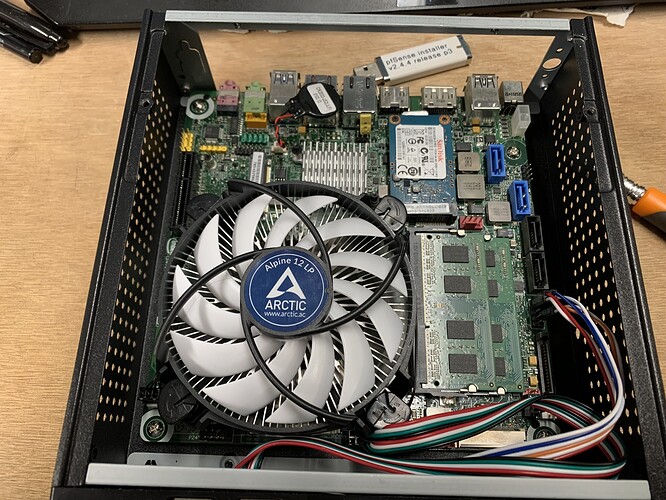 I tucked a little bit of the wire into the front panel space. To the right is a space for a 40mm x 10mm case fan, but this setup is barely warm, though putting the case sideways seemed to give me better thermal action.

From the broken donor laptop that netted me the free power supply, also netted me 2x 4GB sodimms, so even though I bought the 2gb sodimms I ended up not using them. I’m well aware that 8GB of ram on a pfSense box that’s only ever going to route and see VPN duty, is very much overkill. But it was free so why not?

Also, the CPU is also a bit overkill, but it was super cheap.

Thanks @JDM_WAAAT for making this happen via all of your research - I appreciate it man.

I did a similar build several months ago but used the Goodisory case with tempered glass, which as it turns out seems to have horrible airflow and was easily running 55C+ (though I’m also running the 1260L). I ended up mounting a Noctua fan on the side to bring in air near the CPU cooler and temps came down to about 50C. Anyway, the point of my post is to say I really like the case you used and wish I had known about it when I did my build – what kind of CPU temps are you seeing with this build?

When I had it setup here at work I think I was seeing the same idle temps. I plan on moving equipment around at home over my christmas vacation so while the router is home, it’s not powered up yet.

Will report temps when I eventually get it connected.

EDIT: Seems I did in fact take a screenshot before I shut it down and brought it home. Looks like idle was around 49/50c

Do you think you can fit a 4port nic card in this case?

not at all. For my use case, I just needed the dual NICs on the motherboard, so I was able to run with a small case for cheap.

If I needed an additional NIC, I would’ve had to use a bigger/better/more_expensive case.

Thanks. I want something small, but with the 4 port nic card too. Need to look at more cases then. I really like the compact build you got. If I really need small maybe I just go off the shelf. Qotom’s seem nice lol https://www.amazon.com/QOTOM-Q330G4-Fanless-Processor-PFSENSE/dp/B071FWM571

That looks like a solid build if you need small and lots of ports.