Use for leftover Xeons in Chinese Motherboard

Just thought I would throw this in here. I got tired of looking at leftover E5-2667’s sitting on my shelf while my kids gamed on worse computers, so I decided to give the old chinese mobos a shot.

I started looking at the bare bones 2011 motherboards which run from $40-$50, but most were 2 memory slots or lacked USB3. I found this guy on amazon with decent reviews and it had the added features of an M.2 slot, USB 3 and 4 memory slots. It was $89 when I started, but I found the exact board on ebay and the seller accepted $75. 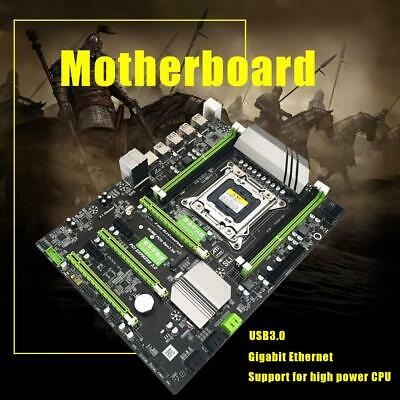 the board is brand new, boots from the M.2 slot and works with ecc memory. I can say this guy paired with a 1060 is a very capable gaming machine. Just in case anyone else was thinking about trying out one of the boards, it worked well for me. 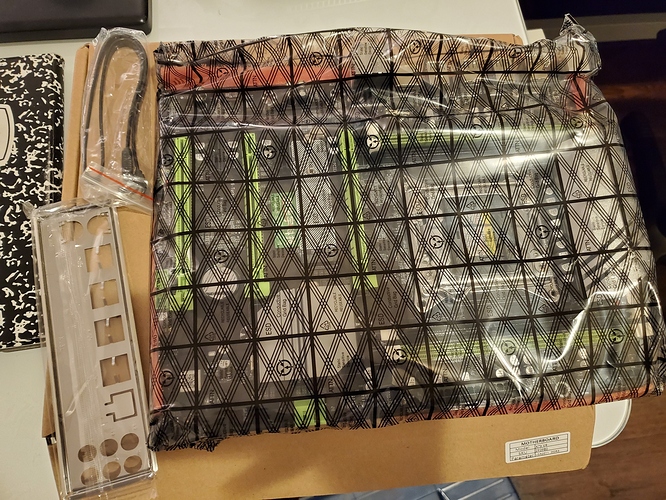 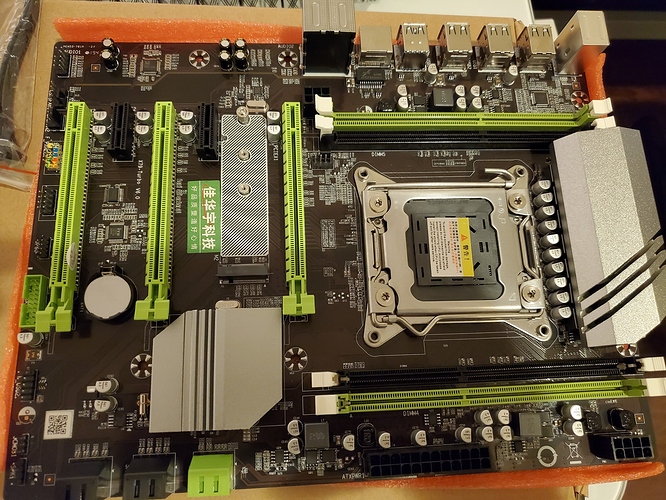 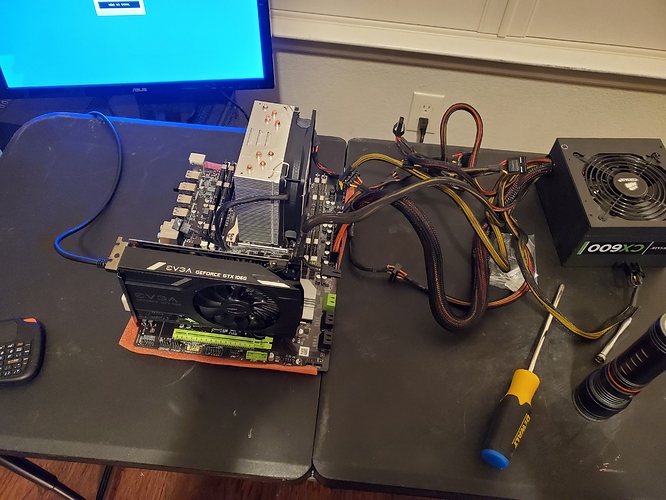 nice, keep us posted once you get it up and running. 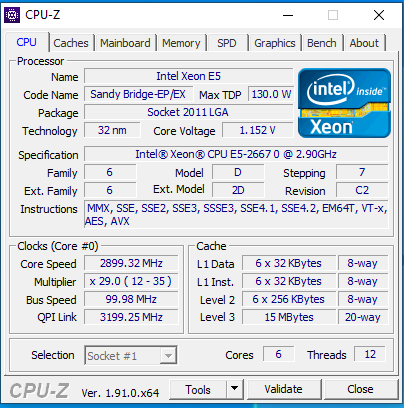 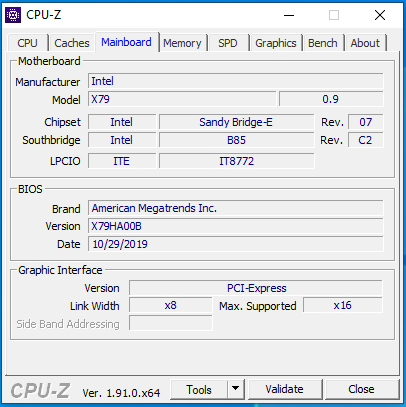 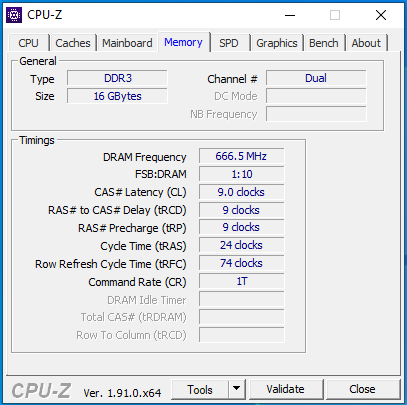 Looks liek the amazon link shows Z77 chipset instead of B75 and quad channel memory, so perhaps it is worth the $20 more.

Thank you for posting about this board. I saw these but was not aure if they were any good. Looks like it would make for a nice system.

Overall i’m happy. Was happy enough that I bought another for the 2nd E5-2667 for another kids computer. The NVME boots windows 10 with disk tests in the 1000 MB/sec average, which is about 5x faster than the results form the SSD it replaced. Once running a GTX 970 works well, the other running the 1060 runs well. You can overclock the ram by forcing it to a higher speed, but the CPU overclocking is limited to the fsb, which can be iffy. I continue to see the video card running at 8x instead of 16x even though everything says that max supported is 16x. Checking online has confirmed that this isnt really a problem as there is no different in the FPS from the cards running in 8x vs 16x, but still confusing.

I wanted a board supporting USB3 for the Oculus rift S headset, but the usb 3.0 ports on this board use the intel controller which is not compatible with the headset at this time. So while i can use the on baord usb 3.0 for usb sticks and other perephials I cannot use it for the VR headset. Had to keep using the known compatible pcie usb 3.0 controller I had previously purchased.

Thanks for the info. I also have a few 2667 chips around that would make for a nice cheap workstarion. Need to see how many drives i can put on to this board.

RE: I continue to see the video card running at 8x instead of 16x even though everything says that max supported is 16x.

I have a couple of Jingsha X99 - which appears to be a derivative layout design from the common Chinese x79 knockoffs, including with m.2 support. I’m offering my comments as thoughts to help look at why your card comes up as x8 in an x16 slot. You are correct that you’re unlikely to see any real-world performance difference with it as an x8 vs. x16 (and this is pretty well documented observation).

I was interested in pcie bifurcation on the x99 board and learned some things that may apply in your situation. However these thoughts are all going to be dependent on the actual motherboard layout, BIOS, and then BIOS settings.

The BIOS probably has a ton of options that you may want to explore (if you have not already done so) esp related to PCIE lanes assigned, bifurcation etc. You can usually find these under the NB settings look for IIO0 or similar. you may also be able to find a screen showing what/how a card in a specific slot has linked up.

Noteworthy: silkscreen slot numbers on the motherboard bore NO relation to the PCIE slot numbering in the BIOS.

On my Jingsha x99 what I found is the following:

If I install an m.2 nvme drive in the m.2 motherboard slot then x4 lanes are robbed from slot #3.
In order to use slot #3 I had to force bifurcation to x4x4 and then I had a usable slot 3, without forcing bifurcation then slot 3 was not usable by any card, x4, x8 or x16.

(1) More than likely one of your slots is x8 in x16 and (2) more than likely using the motherboard’s m.2 slot will cause x4 lanes will get robbed from some slot. Two things to map out there.

I personally think these are really cool inexpensive boards (x79 and x99) with a lot of potential.
other thoughts, find a x1 video card, use that as the head on the MB and install qty 2 asus hyper quad m.2 for carrier, a x4 m.2 carrier card, and use the 1 onboard m.2 slot fora total of 10 high performance nvme disks. Or just one quad carrier and a nice graphics card and maybe a 10Gbe adapter in the remaining x4 slot… lots of interesting things to do here.

Well I was looking to see if I could get a better price on aliexpress and found a dual cpu board also. #Aliexpress US $113.16 54%OFF | X79 dual CPU motherboard LGA 2011 E-ATX USB3.0 SATA3 PCI-E 3.0 with dual Xeon processor motherboard with M.2 slot dual Giga LAN
https://a.aliexpress.com/_sjn6od

Here is what looks to be your board for 64 bucks.

They also have a dual m2 slot version of your board also.

My board has 3 full size PCIE slots. I suspect they are all very related though. I did look through aliexpress, but on multiple occasions I have had bad experiences. I would only consider it at this point if there was a big difference in price and I didn’t feel like $10 was worth it.

I may have to pick one up just to test it out. Being able to add a video card and a m2 drives makes for a good price if you sont have any problems.

Long time lurker, first time poster. I’m gonna pull the pin on one of these shortly to go with a i7-3960X I stumbled into. I’ll let you know how it goes once all the parts etc arrive and I have time to built it. It might be a couple weeks 'cause I am going out of town for a bit.

Cant wait to hear your follow up. I think once I sell come of my extra boards, i may look to pick one up for testing.

Sorry, but you do mean 16GB of DDR3 not DDR4 right? The motherboard doesn’t support DDR4 and neither does that CPU according to intel. Also should mention that the CPU doesn’t look like it supports ECC so no super cheap server memory for you, will have to go with regular DDR3.

Sorry, but you do mean 16GB of DDR3 not DDR4 right? The motherboard doesn’t support DDR4 and neither does that CPU according to intel. Also should mention that the CPU doesn’t look like it supports ECC so no super cheap server memory for you, will have to go with regular DDR3.

Thanks, good catch. Edited the post to reflect the proper RAM.