Unraid crashes and is unresponsive

I’m at my wits end. I’ve gone though just about everything trying to debug this for the past couple months.

I posted on discord a couple weeks back with a video of what I saw on the unraid screen. Discord 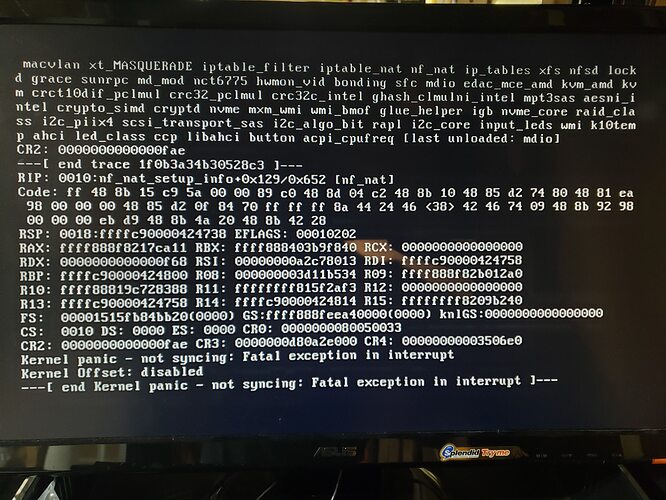 I just don’t know what to do anymore. Any help is much appreciated.

Not to be that guy, but you may also want to create a thread on the unRAID forums for this as well. Just be sure to include your diagnostics log.

you already do the below?

“Under cbs in bios power supply idle change it to normal I believe is what it is called. It’s usually low power”

I don’t believe I do that in the bios. I’ll apply it today and see how it goes. I guess I would remove the nocbs from the start up?

Just out of Curiosity…by chance do you have Organizr docker container running? If so, turn it off and see if that solves your crash/instability.

I know…weird…but try it. It worked for me (ryzen 3900x unraid build)

Weird, but i’ll give it a try. If I lock out again I’ll do the bios change mentioned by faultline

Yep. Global C-States and the “Typical Idle Power” setting is what he’s referring to. These are common settings people have found help resolve their lockups on Unraid-Ryzen.

I went through these settings as well…in the end for me…Organizr docker container was the cause of my issue. Something possibly to do with their PHP version. From the look of your syslog crash though, I’m doubtful you have the same problem I did though. My syslog showed a CPU taint with php being the culprit.

Organizr devs are aware of the issue and are researching it.

Late september ish I started having unraid (6.9 latest beta, currently beta30) lock up and it requires a hard reboot to fix. Initially, docker shuts down and most CPU cores go to 100%. Within 1-5 minutes, the Unraid ui stops responding and the server...

That’s crazy that a docker like that can cripple a server. I use something Heimdall for web access to all of my services.

I was pulling my hair out for days dealing with that issue. It was driving me insane. I’m just as shocked as you guys that a simple docker container can cause so much havoc…but it is pretty clear from what people are reporting.

Glad I could help

This is just a guess, but I think it might have something to do with the amount of network traffic it tries to push through. I had it running for a couple weeks as well and kept noticing that Unraid would just start getting slow as hell when it was running. Then I noticed the ungodly number of internal calls on the Letsencrypt logs. Now, to be fair, the internal traffic was only there because I set it to hook up with Plex and SAB etc, but it was still extreme. Heimdall has been 100% for the last couple years I’ve had it.

Well…It appears that 6.9.0 RC1 and RC2 have fixed this issue. How and what specific update in the changelog addresses this, I don’t know…maybe an update to php.
…but I’ve been running solid for a few days now WITH Organizr up, open and fully connected (plex, nzbget, sonarr/radarr, etc). Others are reporting the same.

I’m on rc1 but haven’t tried organizer. I can’t seem to get rc2 working on my machine without it crashing 20seconds after boot. super weird.

I could believe it is a network issue. Possibly 10G or mtu set to 9000. Had something else have issues with those in the past.