Alright I’ll start us off, let’s point and laugh at how much of my life has been wasted:

The worst part is that I have at least 2k more hours for ArmA 2 and ArmA 2: OA each, because I ran those independent of Steam for some time. Not to mention all of the games that just aren’t on Steam.

Would be even worse if it counted Battlefield 2

Yeah I think that if steam had always counted play hours my time would be a lot higher, but here is the record of my money wasting:

I hate to think how much I have spent on steam over the years. 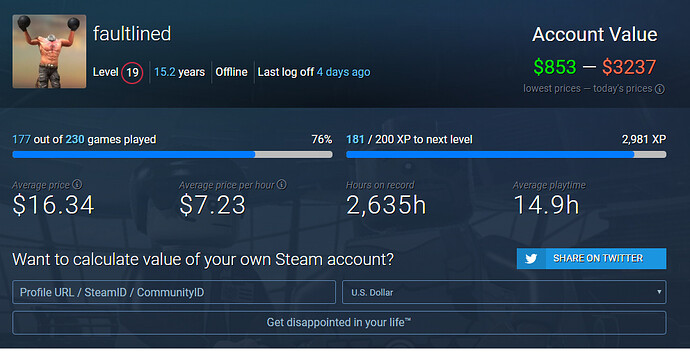 Look at these rookie numbers, gotta pump them up…

You are the least degenerate here

Your cropping triggers me

I don’t mind that one as much as Mr. o-NEXT.mp4

Get on my level.

Just like most of my possessions, pretty much worthless.

That is a new low.

You know, I honestly thought mine would be lower.