Item description: Used Asus ROG Strix 3080. Picked up at Microcenter April 2nd. Only Looking for EVGA cards plus cash difference. The card was opened and powered on to confirm working 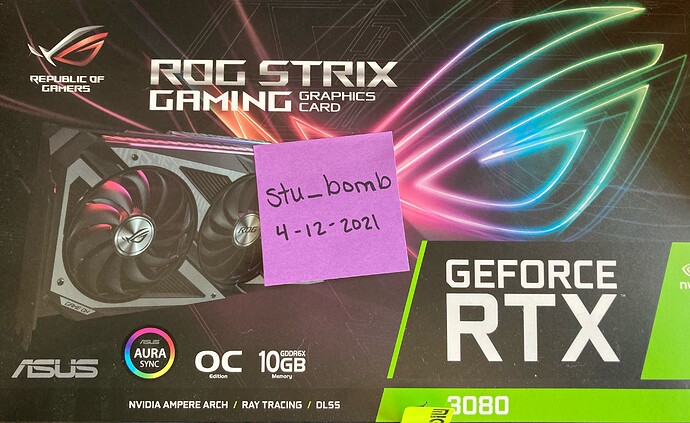 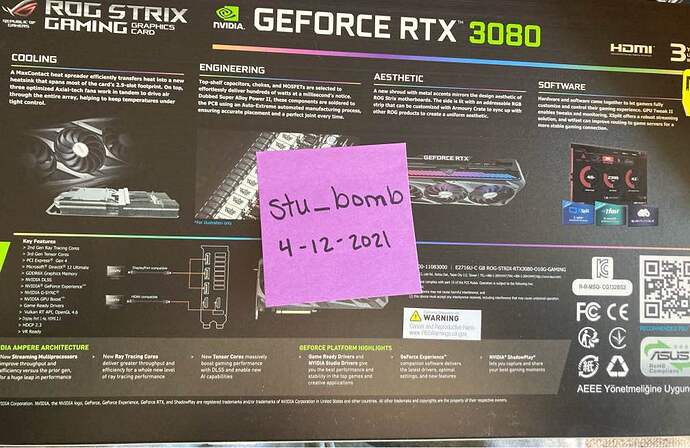 most people would give anything just for any of the 30xx cards… and now you’re being picky about which one?! how dare you sir, how dare you

I would prefer to go to the lower cost cards for certain reasons. Id like to see it go to a good home like its other brothers and sister…

Also sitting in a line for 6+ hours is the only way to get em currently.

I’d be happy to buy the card from you with cash, but the only think I have for trade is a MSI 3070.

So you opened the box, installed and tested, but it’s no longer new, and you still want to trade for the difference of MSRP to meet the original value?

I don’t think I ever said it had to be new. I clearly stated I would be basing all trades off MSRP, and that mine was used. Do you have anything to offer or discuss? If you happen to have an EVGA 3080 as stated I’m all ears.

I sadly couldn’t jump a step down.

Referring to MSRP is reasonable in theory, but “reasonable” is absent from all GPU markets currently. I’m just saying that I fail to understand what would motivate anyone to want this swap. Good luck.

Reasonable isn’t absent from this market, unless you’re referring to the “new” MSRP that’s way off from the FE devices. You must be dealing/looking in the wrong places or not be willing to put forth the time(mostly) to get one. People want the “higher end” cards. I personally have no use as they’re all the same for my use case. So if a more expensive card is all I can get, I’m not really worried as people tend to want them over their “cheaper models” I’ve had one trade on here, and multiples elsewhere. The luck isn’t really luck, since I’m easy to deal with, quick to respond, and not looking to make anything.

The good luck was sincere; I wasn’t trying to criticize you, only remark on how all the GPU prices I can find are massively inflated. Where are you finding reasonable prices?

I took it as wrong apologies, my bad! It’s time based to get them. I usually take a day off every 30 days and sit in a Microcenter line. I’ll sometimes take a jab at prebuilts if I can get the difference in parts or someone’s kid needs something with an iGPU they can get by with. Also in quite a few queues, excited about a specific TI queue.

Cool, thanks for the suggestions. I apologize for my wording choice.

These have been long gone!

I should have 80Ti’s in hand shortly however!

If these have been long gone - please follow the forum rules.

This topic was automatically closed 60 days after the last reply. New replies are no longer allowed.