My system has started running incredibly slowly, and this problem occurs after the system is running for about 20 minutes. See this video for what I’m working with (sorry for my shaky arms).

Suffice to say, it is running too poorly to even shut down normally, and I have to hold down the power button.

After I am able to get back into Windows, it works normally for a while before the problem reoccurs. The system worked without issue for about two years. I recently expanded my storage using two Seagate Ironwolf ST4000VN008 drives (one internally via SATA2, one running as a backup in an external USB2.0 enclosure). This problem started occurring after I installed this drive. The video above was taken after I removed all expansion cards and left only my SSD connected via SATA 2.

I am not fully certain what the 100 degree temperature shown in the video is, but I think it might be the Northbridge. The Northbridge heatsink is exceedingly hot to touch. Here is a slightly more detailed description in SpeedFan

Can you take some pictures of the layout of your build?

Please upload the pictures to the forum natively, there’s no reason to use an image hosting service.

Here is what I have currently. 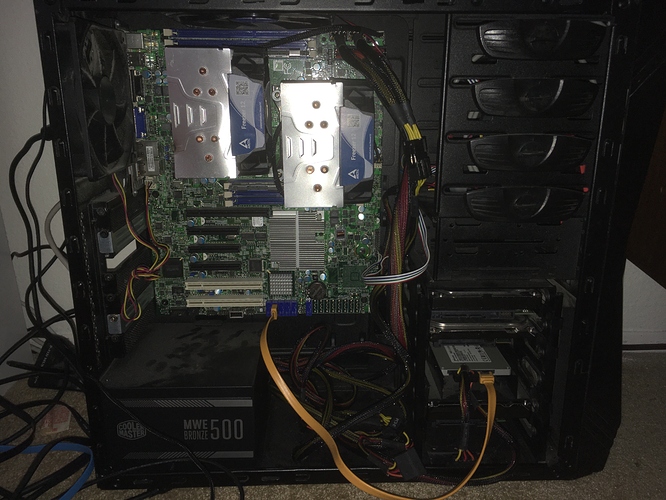 Certainly, the PCH/NB on this board does get toasty, and its heatsink was designed for server chassis with lots of high-static-pressure case fans. It doesn’t look like your case would have a lot of airflow over that point. I just aimed a spare Arctic F14 fan toward the PCH/PCIe area on mine.

I have to order a fan off amazon, but I’ll give that a try. It sounds like that could fix the issue

You can use pretty much any fan if you have a spare one around, just to test.

Even a desktop fan? I can point that into the case for a while and see what happens XD

I’ve used a house fan (Vornado) on high to troubleshoot a heat issue I tracked down to my RAM before. The only thing you have to consider is that you will have to leave the side of your case open which will change the airflow in your case. Any positive pressure you have that forces air over certain areas will be gone. I don’t know if a desk fan would put out enough airflow to overcome that. A house fan on high would be better than a desk fan if that’s an option.

I put a case fan on the side and pointed it at the NB, and the temperatures I was concerned about have stayed around 80 C or below. This is much better than the 100+ C I was getting before. The server ran pretty well for a night. I tried to put it through its paces by running handbrake on a couple videos, but it got about 10 hours in before it started running slowly again.

I’m wondering now if it has suffered permanent damage from running at high temps? I know the Intel 5500 chipset is rated for 95 C.

What are the temps of the CPUs getting to while running tasks?

I am currently having trouble getting the bios to POST. I’ll turn it on and nothing will happen: fans whir, some lights eventually blink on my keyboard, but the BIOS screen never pops up. Normally with this motherboard, it beeps once when it successfully boots, but that isn’t happening either.

This was occurring earlier too. I thought it was a consequence of having to turn off the computer manually, so I left it out of my initial post. Then, I seemed to be able to get back into the BIOS by removing all drives. Clearing the CMOS by removing the battery for 3-4 minutes with the PSU unplugged seemed to help as well. But these steps weren’t working this time.

I’ll keep trying different combinations and report back if I can look at the temperatures. Does this help pinpoint the problem any?

Thanks for all the help, everyone!