Hello there. I have recently come across an unusual SSd from Sandisk and I couldn’t find the exact model and datasheet anywhere. Not even at the sandisk website. The model of the drive is Lightning LB 406SC (LB 406S is available). The drive is from ebay and the seller couldn’t specify much either. Could someone help me here to identify the drive is SLC or MLC, perhaps with a datasheet. I was said that the drive is a Netapp one. Thanks.

Have you attempted contacting the manufacturer?

Is there a reason you’re looking at this drive in particular?
There’s no shortage of SSD options.

If it’s an MLC drive then it has a TBW of 15PB, and if it is SLC drive, then the TBW is unlimited, which no modern drive can match at a price of 40 bucks. That’s the reason.

These are their old SLC “Write-Intensive” drives. The “Read-Intensive” version has been discussed here before - 406SC is a mistake, it’s a 406S.

Not a mistake. It’s printed on the label. Please check the attachment. 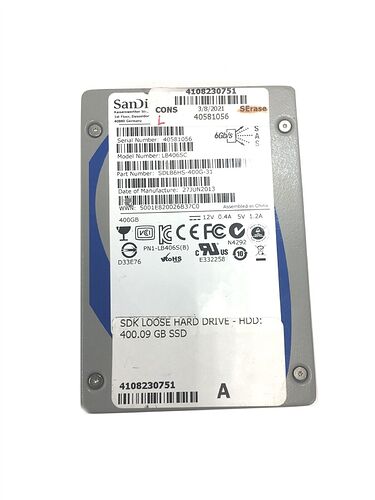 As per SanDisk’s datasheet for 406S, its said unlimited write endurance. That’s why I’m very curious about this and want to be sure if it’s slc or mlc.

Since the information is unavailable and the manufacturer itself passing the pillow, I have done some research myself. Based on the part number, SDLB6HS, it is an SLC drive where all MLC based drives have part number SDLB6HM (Last letter denotes the type of NAND, S=SLC, M=MLC). Still, this is just based on my research only, and unverified. So, still any type of verification is much appreciated.

you ever met an “unlimited” anything that wasn’t a marketing term?

It’s SLC, they didn’t make a totally different secret model with no documentation - suffix is probably hardware revision or shipped with custom firmware for a large OEM order or something along those lines.

What’s your use case for the endurance? Can probably do a lot better than $40 for 400GB, there’s lots of enterprise high-endurance SSDs out there.

At $40, I don’t think there is too many 400-500G options with write endurance like this drive. I always wanted to have an SLC drive in the rig.