So, I had never done any type of networking before (although I did do a Cisco CCNA? or something like that networking certification back in high school about 20 years ago). I’m more tech savvy than the average Joe, so I figured I would dive right in.

You see, my wonderful wife is always wanting me to throw up TV episodes onto our Plex server after they air, but I’m super damn busy. I am a full time RN that works a covid floor and I am in my final semester of graduate school to become a psychiatric nurse practitioner. I ain’t got time to hunt down all those TV shows. Another reason I wanted to do this was because my damn nVidia Shield TV plex server kinda sucked and would constantly go down. Plus, I only had about 10TB of space. So I wanted something cheap, reliable, and could provide automation. Enter this wonderful community.

After looking through my options, I went with a prebuilt PowerEdge T110 II. It could be found for less than $100 on ebay, had lots of space, and could pretty easily host plex for my house (and the few co-workers than have remote access). I ordered the server on eBay and when the server came in, I noticed it didn’t have the II behind PowerEdge on the front case. I did some digging and the guy advertised the wrong server. He apparently clicked “sell one like this” on another auction without realizing it wasn’t the same. He refunded me and told me to keep the server anyway. I flipped it for $60 locally.

I purchased this LSI card for $25. I had a hell of a time flashing this to IT mode for JBOD. The instructions I found here were not working, it just hung during the flash. Luckily, didn’t brick the card. I ended up having to download a full DOS and flashing it that way.

Total build cost: $489 after selling the extra server and RAM.

I had an existing 4TB HDD and a 10TB HDD. I used the 10TB as a parity drive and added the 4TB to the array.

Final build. PowerEdge T110 II with a 1230v2 quad core Xeon, 32gb RAM, 28TB on the array, 500gb SSD cache, 10TB parity for under $500. The only snags I have had are the flashing of the LSI and the fit with the SAS drives and breakout cables is super tight and the server door is a bit hard to close, it definitely puts pressure on the power cables. Otherwise, I could not be happier with the build. I added Jackett, Sonarr, Radarr to automate my video needs. Now my wife doesn’t text me at work to remote into the home PC to get her TV shows, it snags them automagically! That alone was worth the $500.

Thanks for all the information you put on the site, I couldn’t have done it without the vast knowledge base. 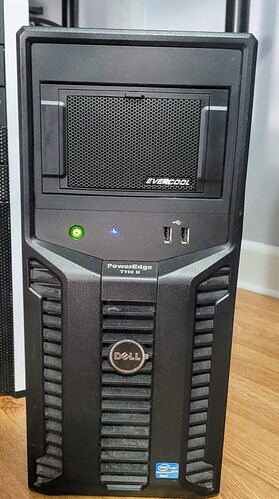 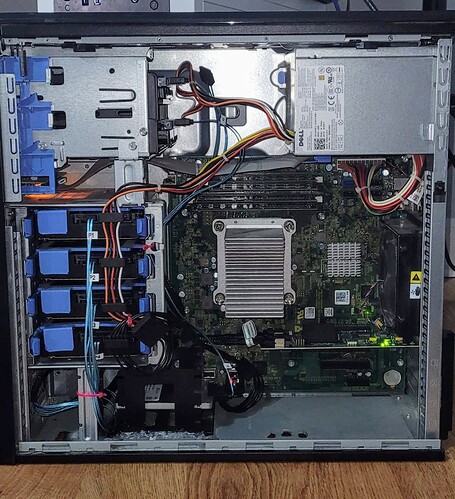 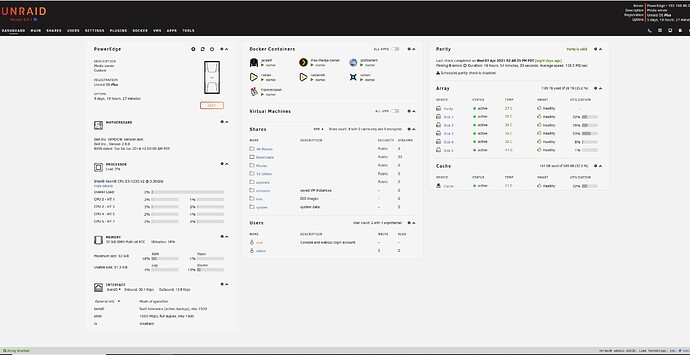 I have at T110ii and had the same concerns about the connectors and the case, then I found this. Had to do the 3.3v cable mode on the sata power cable connecting to this cable, but other than that, it works, great.

I’ve been looking to replace some SATA drives with SAS drives in my Dell T110ii but couldn’t figure out the cabling, all the 8087 sas connectors I’ve seen had the cable coming straight out the back which would have hit up against the case cover the way the drives are positioned. See sata cable below. [PXL_20210111_220528192] In my research for how to deal with this issue I came across this thread. It says to look for 0233TD which is a 8087 sas cable with sas connectors that sit flush again…

Also do you have any details on that bracket under the 4 3.5 drive cage that seems to be holding your SSD?

That bracket came inside the evercool 5.25 to 3.5 bay adapter (to hold 2.5 drives instead of 3.5 drives). I just hotglued it. I was going to drill and mount it in the bottom, but I didn’t want to pull everything out to get the drill inside case.

It should. It may not fit 3 of them though. 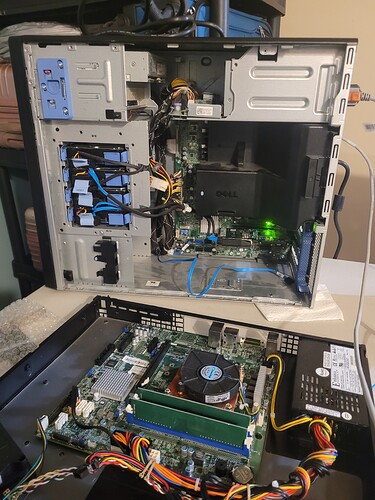 Saved an old T310 from the dumpster, bought 4x2tb sas drives on the cheap on ebay, setup truenas on it…

Will be a great birthday present for a good friend