I should have grabbed one last night, they are sold out now.

@ckeltner, I think you can still pick one up off their main site for the same ebay prices.

I think they will end up coming back on ebay soon. Their ebay stock usually lags behind a bitt.

If they’re out of stock at vipoutlet.com as well now, what’s the likelihood they’ll get new stock any time soon? Failed to pull the trigger in time and kicking myself now.

Back on VIP outlet linked above with a coupon code 15cyber for another 15% off - showing right at $101 before tax.

We’ve had some pretty killer deals pop up on the Prodesk 400 G4, but nothing on that specific machine.

any issues with the cpu upgrade? picked the same cpu from microcenter today and put it in but nothing is happening. put the old one back in and boots up fine.

i have already added ram and nvme as well as pulled out the hard drive and unplugged the dvd player. wanted a little more power. saw your post and thought it was a great idea.

Does it post at all or nothing on boot? I didn’t do anything special other than dropping it in, still running strong.

Edit: saw you said it was the same chip.

i have already added ram and nvme as well as pulled out the hard drive and unplugged the dvd player. wanted a little more power. saw your post and thought it was a great idea.

This is what I did as well, stock 4 + 8 gigs of ram, 1tb NVME. Also pulled the Wi-Fi chip to steal the NVME screw.

I did have some issues when I first got this box booting with just the stock 4gb of ram and stock CPU into to windows to perform bios updates, swapped the 4 for the 8 and worked no problem.

Thanks. ill try again later today. i always build my own boxes so i wasnt sure if there might be something to change the the bios or something. i went with 16gb ram 500gb nvme. been working fine for a couple weeks but wanted a faster cpu. i tossed the cpu in, fans spin up but nothing happening. frustrated i pulled it out and put the old one in and works fine again.

You may need to update the BIOS to use that CPU.

Thanks. going to try that. just put it back in and nothing again. i was hoping i did something wrong last time like it wasnt set in place right.

that was it. boy that was stressful. the cpu is the only thing i really hate dealing with.

note to anyone reading update the bios before cpu upgrades just in case.

Have any of you picked up a new i5-8600T CPU from this reseller? They are currently going for $130, but curious if any of you have made a successful offer below that price. They have sold 28 and still have 167 available.

Looks good to go IMO, if a little expensive. 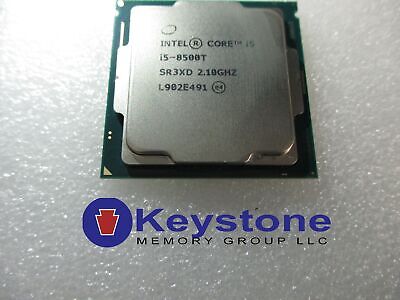