The original NSFW build was designed around the Gigabyte GA-7PESH2 – a great board, but getting a little hard to come by with increasing prices. An alternative is given in the build guide: Supermicro 2U CSE-826 SAS1/SAS2 chassis with X9DRI-LN4F+ and rails. I went this route! It comes with a decent motherboard, a solid chassis, and a pass-through hotswap back-plane, plus it include redundant power supplies. All that, and it’s still pretty cheap! The big downside is the 2U form factor, which forces you to use low profile cards. It’s also loud if you dont plan on replacing the high pressure fans or burring it far away from your earholes.

On to the cost breakdown

Here she sits in all her glory in my “secure subterranean server” (aka laundry) room on my “server rack” (aka gun safe): 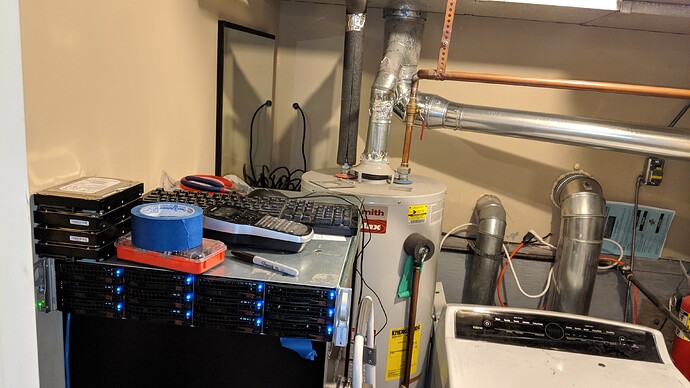 One caveat is the storage cost: I got lucky and someone sold a bulk batch of 11 drives in a poorly listed auction that I got for $51.10 shipped – 8 of them worked, so around $6/3TB drive! Otherwise, expect to pay around $20 each for similar drives. I already did buy a few to get started, but hey now I have 4 spares for when things die.

Because of the 2U form-factor, using a LP GPU limits you to the 1050Ti. I just use it to pass-through for remote gaming via steamlink, which works pretty well for couch gaming. If you don’t want this, you can nix the GPU all-together. Also be sure to get the LP versions of your SAS controllers! Here’s my internal layout: 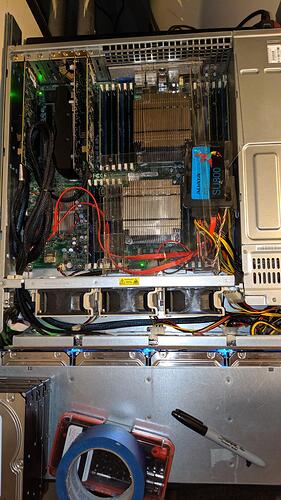 The server has been running for several months. I’m hosting a 7-node ARK: Survival Evolved cluster which is already one of the top-ranked PvE modded clusters. Come do some dino stuff on the Survival of the Litest cluster with me

It also runs my home media server with Plex, Sonaar, Watcher, etc. A Linux development VM, OSX Hackintosh VM, and WIndows gaming VM run in the background, along with my Algo VPN server VM. With all this, I’ve never seen CPU usage exceed 20%, and memory usage usually sites under 50%. 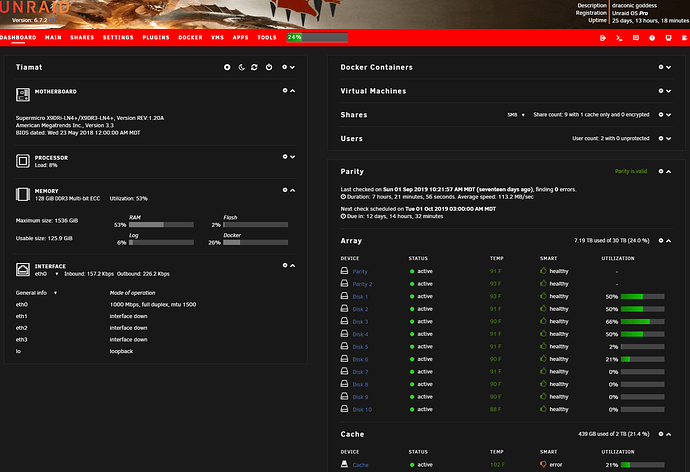 Really happy with this beast so far! Huge thx to everyone in this community - you all rock

If you want a serverbuilds.net unraid banner, just ask @manbearpig2012.

It wasn’t on sale at the time, but the price obviously changed. Maybe running low in stock? Idk, try checking back later and see if it drops again