This post is nearly a year overdue. I have started it, procrastinated it, restarted it, and finally finished it. I’ve probably been lurking here for around 2 years at this point. Using these forums I’ve even helped a friend of mine build himself a Nas Killer v4 before I managed to post for build complete. I was a lurker of the forum before I ever joined the discord or joined the forum itself for that matter. I used watch my digital collection of movies by plugging in poorly organized external hard drives in my computer.

I found some post on r/plex mentioning these forums about how to cheaply go about getting myself a quality plex server on the cheap instead of something such as a Synology. I used to have an external drive for tv shows, and my movies were shared between 2 other external drives. I would view files in windows file explorer set to view large icons to figure out what .mp4 I wanted to watch, like I was a caveman or something. My girlfriend had no interest in watching media that way. She would just use Disney+ or an actual blu-ray player.

But since I started using Plex, she’s now using Plex as much, if not more, than I do. The fact that to her Plex behaves her Netflix or Disney+ apps where she can cast whatever she wants to watch to the TV, but she knows that How I Met Your Mother isn’t going to be taken down half way through us watching the series, has really brought my girlfriend around. For her its simplified watching TV because its Hulu, Netflix, and Disney+ all in one app. For me its that as well but it’s also a hobby.

I definitely could have cut some costs and got cheaper variant and or less of almost every main component, but I find peace of mind using ECC ram, even if Unraid doesn’t care. The ease of use for Docker Containers alone justify me purchasing an Unraid license. Now that its all said and done, my Nas Killer v5 is easily the best $1,000ish that I have ever spent.

Below I included more than just my Nas Killer v5, just a few of the other things this community has convinced me to buy. I probably don’t need an transcode box for the 3 of us that use my plex at the moment, but the in-laws are impatiently waiting for access.

I almost exclusively use my nas to host files for plex. I keep drivers for everything I own, and my most often used installers. I do have family photos stored on it as well, as well as backups at my mothers and my uncles. I currently share my server with my girlfriend, and my mother. My girlfriend and I are going to be moving in the next couple of months to an area that has better internet options regarding upload and we are going to be able to share the server with her family too finally.

I am using Unraid, and as of writing I only have three dockers. Tautulli, HandBrake, and FileBot. I also changed the logo to server builds blue. 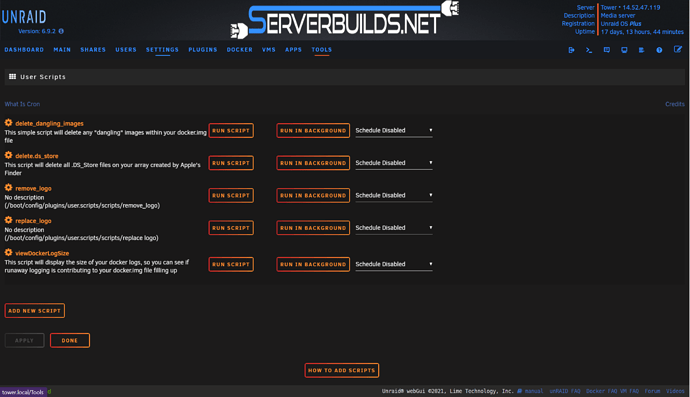 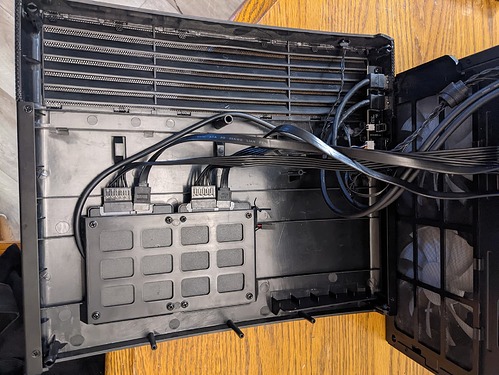 I wish I had a photo from the 2 HDD cages on the backside. I think I have the cables managed well enough but I bought the fan grills because fitting 8 data and 8 power cords for the drives results in a lot of wires everywhere. I had never used fan grills in a build before because every tower ive built in has always had a motherboard tray to hid excess cables. I then realized I liked the aesthetic of fan grills, and put fan grills in ever fan in my other computers just for funsies. 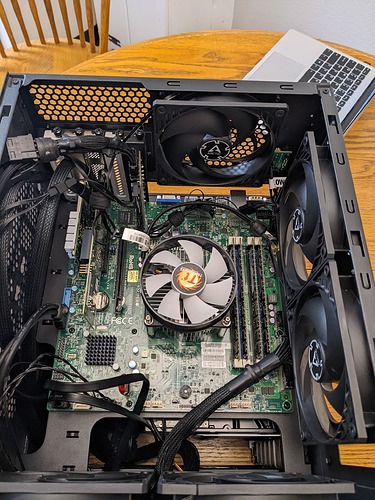 The fan grills aren’t in these photos because I only had 4 HDDs in the system at this point, and cable management was much easier than it is now. 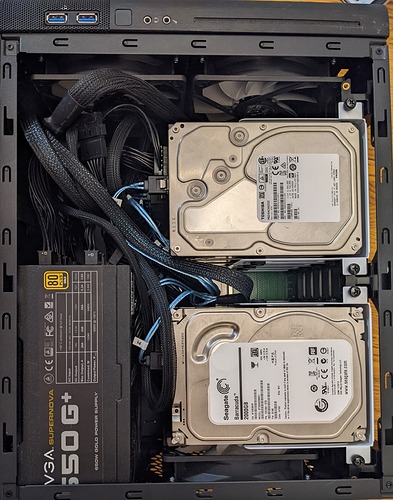 An example of ‘good’ cable management that does not yet require fan grills. 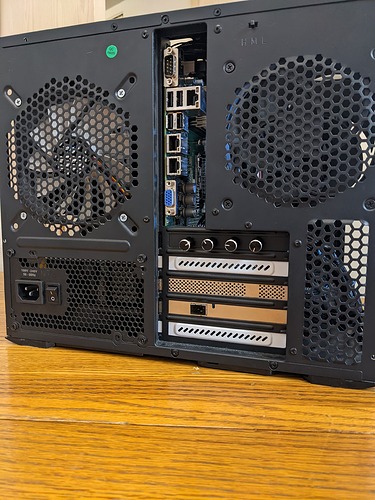 Unfortunately the motherboard I bought came with a 1u IO shield and heatsink, so I am IO shieldless… 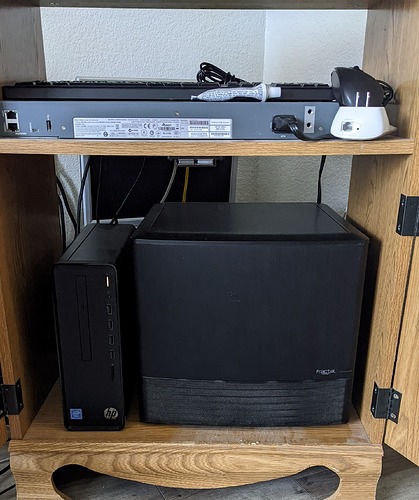 You may notice my fancy $5 at the local thrift store VGA monitor behind this ‘girlfriend approved server rack™’ that I occasionally have to use for troubleshooting/setup.

For movies, I can basically run MakeMKV, move the files into my ‘handbrake’ share, and then HandBrake exports it to a folder that FileBot is watching, and by the time I wake up I will have a movie to add to Plex. I leave it in FileBot’s output folder just to make sure everything was encoded and named properly. TV shows are still a little more involved unfortunately.

Joining this community has been a lot of fun for me. Most of my friends are not tech enthusiasts, and don’t share my interest in computer hardware. They either play on console, or I built the computer they use. Using dockers to nearly automate how I rip DVDs and blu-rays and add media to Plex has been awesome. There have been so many things that I always wondered ‘is this possible, and if so how do I go about doing it?’ These forums and the discord have kind of been an ‘escape’ into my passion for computers.