Long time, no chat
After some long nights and some absolutely splendid uptime here we are. The old workhorse needs an update. Along with making some grades based promises to the kids, its time to dip my toes in the Unraid Gaming Build Guide.
Below we have 90% of the parts on the way, with the remainder being transferred from the old steed. Few odds and ends that need more thought.

I would like to add an LSI in as well once its all up.

More upcoming - should have a good go at getting most of it up by next week.

That’s what I went with! They more or less guided me that way when I sent them a request. They’re all the same cooler, just different fans and quantities. The F12 TR unit is like 28pts lower per their NSPR. However it’s a single fan on that unit. Figured I’d add a second if I saw and temp problems.

Tiny updates. Got around to completing a once over of the board. Seller left in a 500gb 970 Evo so it just gets better. Ill toss that and a 1TB 980 pcie 3.0 on the dimm.2 and that should be good for the two gaming VM’s.

Updates:
*Boots
Was getting worried as boot time is rather long. Seems to be that way.
*Updated BIOS
*Shows all 128GB however it’s at 2444. I’ll live with this as reading its hit or miss to even get 128GB running.
*Did a quick secure erase on both NVME.

Updates-
Its been up and running for a few weeks now. Havent had time to sit down and continue the gaming aspect on it yet as other stuff around the house has taken priority. Adding a wall in our basement and some further Ubiquiti networking to keep the cave happy. Once that is buttoned up and some AC Infinity fans installed we may do further movement of racks.
However, 3 day weekend means there should be strong progress on the Gaming Hopeful side.

I am displeased in myself. There has been no progress on this. I shall dedicate time tonight to continue forward. .

Got busy, continuing from step 8 tomorrow for the 6 core 6600xt VM!

Tinkered with getting one done tonight. Seems to be different ways to go about the guide now as with all updates. Didnt have to do any of the info in step 8. Also had to change from i440 to Q35 as I was having issues with remote desktop not allowing log-in and a single core for the VM being pegged at 100%. I should be able to finish tomorrow starting at Step 10. 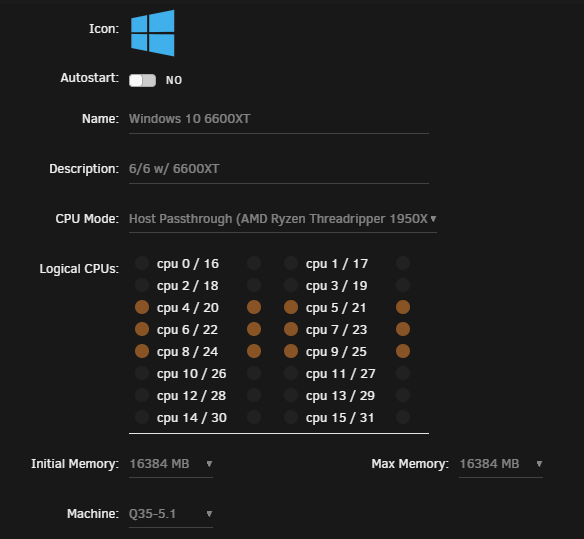 Looking good so far. AMD cards will definitely require different settings as they are not outlined in the guide at all.

Half Ill chalk up to following the guide to a “T” and the other half Ill chalk up to the card. Looks like Unraid 6.7+ doesnt like a few steps. Had the VM going and was getting a single core pegged at 100%. Switching to the Q35 resolved that. All in all switching to that and removing some of the steps and just setting the IOMMU groups in System devices was the way. The rest reads as just software setup, so we should be good to go this weekend with a few VM’s, depending on PSU. May have to put one on a 1660 Super instead of a 2070.

Up and running. Some very interesting frame rates. I’ll be trying the switching to Hyper V and also recheck my HTML changes.

The re-enabling of Hyper-V did the trick. WHOA. I sat down for a little Apex session and it held right at 120fps max settings. Windowed mode at 60FPS. Need to figure out global settings for 60FPS. Kids will thoroughly enjoy this on their more modest devices. Now to give it a go with a 2070 VM.

Updated above to reflect VM1

Had my first issue arise. Appears the drive for the VM isnt being found now. 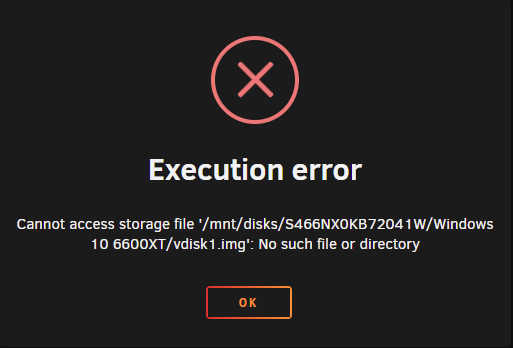 Shows as PASSED under Unassigned Devices

IOMMU listing not showing it as passed. Ill mess with adding it to system devices and see if that solves it.