NAS, PMS, Transcode, etc. all in one rackmount build

I’ve been lurking for quite a while now and trying to piece out a build of my own. My objectives are:

With that in mind, any thoughts on the below build?

Your link for the CPU looks off. I’m reading through the rest.

Good catch! Swapped it out after realizing that CPU didn’t support ECC and failed to update my link. Did so in my spreadsheet now

You can copy/paste the google/excel sheet cells directly into the forum, it will auto-format a table with links.

I should have tried that first… added.

Swapped the WD Reds for WD Red Plus based on SMR concerns - not sure if there’s thoughts on better NAS drives?

Shuckable drives are not SMR. That is the route you should be going.

Did this get built? Just curious about performance and if there’s anything you’d do differently. I’m looking at this route as well, 1 server rack to do most everything I need, rather than a separate NAS plex and proxmox servers for docker containers and some VMs possibly.

It did end up getting built! All told, I’m really happy with the end result. I made a few changes from the original list:

I’m far from a power user, but I’ve found it more than enough to run simultaneous streams, local 4k playback to a Shield Pro, as well as some ancillary docker containers (Home Assistant, SWAG, etc.).

Happy to answer any other questions you might have. 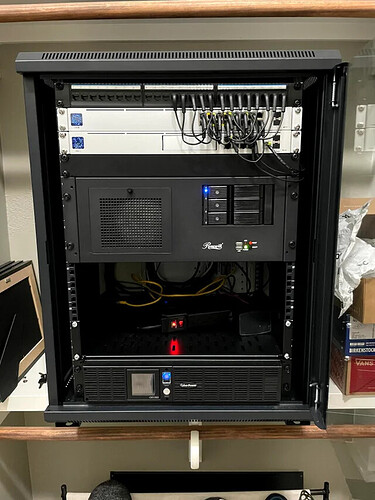 Any reason you strayed away from a server rack, like the dell r710/r720? I think I’m swinging the pendulum back into that court again…seems like you can get a lot more for your money that route. I’ve gone back and forth a dozen times.

you can find an 8/16bay 720 with dual core 8’s and 64gb of ram pretty easily around $500 or less. Just not sure I can justify another $500 for something in a much more familiar form factor. Either way i’m not going to be able to have a living room pc anymore…lol my piece of junk i3 3220 is whisper quiet, those days are long gone.

Sorry, was just asking why he went the route he did over something more “pre-built”. I’m trying to decide now, and if there’s more than just the experience of all DIY, i’d hope he’d mention it. I was going to go the DIY route, but I’m not sure it outweighs the value you can get on something like dell r720, but would like to know if i’m overlooking something!

Heat, noise, power consumption are the first three that come to mind

Form factor is the largest limiter for me. My rack depth is ~16" - it was primarily for my networking gear. There aren’t many options (outside of the more popular desktop repurposes) for something this size.

yeah that is certainly something to consider. need to tack on another hundred for a p400 at least. Or something to use nvenc?

Or quicksync for significant less