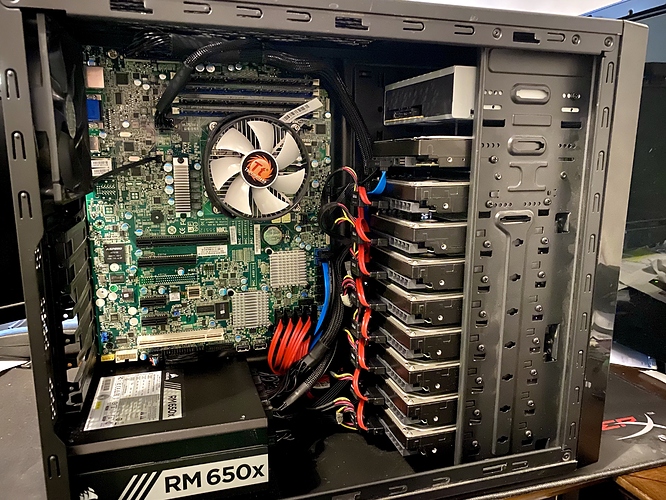 I need a replacement for my current PLEX / Homeassisant server after quickly filling a 2 TB HDD with TV shows and 4K HDR movies. I’ve also been wanting to experiment with ZFS, so what better way than to build a NAS to hopefully hold lots of media to come.

The base is a combo 4 from the NAS Killer 4.1 supplemental guide. I was pleasantly surprised that I got upgraded with an E3-1270 V2 over an E3-1230 V2 which is a 0.2 GHz bump to both base and boost closes and dual NICs. I swapped out the cooler with the recommend Thermaltake and picked up some of the SAS to SATA adapters recommended in a thread somewhere on here

The 8 4TB SAS drives are set up in a raidz2 pool with a total usable storage of around 24 TB. The OS, Ubuntu, lives on a 256GB SSD which is also used as storage for virtual machines and scratch for in-progress downloads.

The case and SSD were from my existing server and the PSU is leftover from a desktop upgrade, which helped the cost a bit. The back fan had a bearing going out so I swapped the front case fan to the back and added 2 120mm fans to the front to help keep the drives cool.

I probably could have gotten a better deal on the drives, but at the time there didn’t seem to be a lot of inventory of 4TB drives and the 3TB drives were not that much cheaper per TB.