I’ve been wanting to build a home server for many years now. I’ve worked as a System Admin and Network Admin and never had a home setup to play with.

Randomly came across ServerBuilds.net on Reddit and was lurking for awhile. The NAS Killer 4.0 just came out and I saw a post about a deal on what would be considered a NAS Killer 4.1, so I jumped on it. Then bought everything else. I had some stuff laying around from desktop builds that I reused (fans, SSD, case, HDD).

Went with Unraid for the OS, because while I want something I can mess with, I don’t want to spend all my free time troubleshooting. Unraid is simple and straight forward. 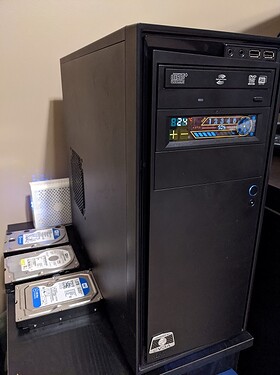 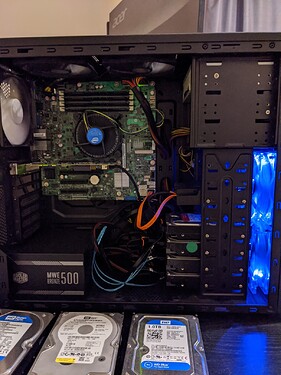 Solid looking build, any plans to clean up the wiring anymore? Or drop in those drives on the sides?

Yeah, honestly, it’s one of those eventually things. The back of the case has hardly any room for the extra PSU wires, so it’s annoying. Unfortunately for the server itself, it’s the child that gets the hand-me-downs from the desktop.

Also, what do you mean by the drive placement?

3drives on the table outside of the case

Another is a 250GB from 2007… that beast still works… just slow/pointless.

And then the 1TB is a drive I found randomly in a drawer at my old job that I can’t get to show up on any system, although I feel it spinning.