I have finally completed my NAS Killer 4 and 8 Bay DAS builds. The final piece was tying the two boxes together with better cabling.

I didn’t know I’d wind up where I did when I started this journey last black Friday. I did set out to build a 12 Bay 48TB NAS but decided to go all in so I could back up the backup and create a real homelab experience so I added the 8 Bay 80TB DAS for a total of 128TB Raw. Part of the homelab experience was to learn a lot more about the windows server environment, play with storage spaces, play with hyper v’s and back up my home/boat audio/media/data servers. The source servers are all linux/zfs based devices. To solve the problem I need the hardware, plus a synchronization solution.

I started building the main 48TB array based on 2 adaptec raid cards at raid 6, 2 legs of 24TB. I wound up here because I didn’t want to lose the space to mirroring and I decided my initial storage spaces parity exercise was a failure based on performance so I got a card that could do both raid and hba but wound up implementing Raid 6. My performance on these arrays is consistently above 100m/s.

When I decided to add the DAS I figured I’d go in for the 10TB drives to give me some room to play with. Because I like pain, I wanted to try windows storage spaces again and bought an LSI 9201 card to use as an HBA adapter. I could never get more than 100mb/s even with caching supplied by a product called primocache. Parity just sucks. Mirroring was great and I got 300mb/s but gave up half my storage. I figured I’d buy another adaptec card and play some more with caching (increasing to 5 250gb drives). I needed more sata connections anyway and figured the card would act as a backup to the other 2. I just could not get the performance with windows storage spaces in parity mode, gave up and added a Two Ports Mini SAS SFF-8088 To SAS 36Pin SFF-8087 adapter which I hung off the adpatec card and moved the DAS to the adaptec with all caching. I used the card to implement another 8 drive Raid 6 array.

For caching I wound up using primocache and I’d say I like it a lot. Enough to add to my other array shortly. Since I had 128g of ram to begin with and only plan on running about 3 vm’s, I gave 24g of ram and the 1.25TB of disk to primocache. On the large array I am seeing 300-600mb/s transfer speeds up from around 100mb/s, sustained well over 300mb/s. On smaller files I was only hitting about 1mb/s, maybe a little more. That’s now sustained over 1mb/s, easily hitting 10bm/s.

My NAS/DAS now has 30TB+55TB useable. I am using 18TB in the source. It took 5 days to back this up at the beginning of this journey. In my final configuration, it appears to backup in 18hours so I am very pleased.

A couple of notes about the NAS. I used a rosewill 12 Bay hotswapple case with a supermicro x9 mb. I saved some good $ on the mb by buying used (processor/mb/ram together). I got a steal on the case which is no longer available. If I were to buy today I would probably go supermicro 846. The rosewill fans and cases were noisy and hot. I replaced the back fans with noctua and went with supermicro cpu fans (had a problem with space for the narrow noctura which was preferred) which solved all problems. Sticking 8 ssd’s in this case was no walk in the park.

A couple of notes about the DAS. I was worried about power on this and am happy to say its hung in there. I had trouble with heat initially to the point it shut down. I did replace the rear fan on initial build with a noctua but added 3 smaller noctua’s on a 3d printed card for additional cooling and split the power. This solved the problem completely. When I added the Two Ports Mini SAS SFF-8088 To SAS 36Pin SFF-8087 adapter to the adaptec card in the NAS I bought a second one and added it to the DAS and modded the bracket and added the plate to the DAS and swapped out the wiring to make this ultra secure.

The expense is an interesting question. So taking drives out of the equation and putting all raid/hba cards into the NAS cost, the NAS build wound up at $1295. Similarly with the DAS I wound up at $146. Drives are a ballbuster for cost. That’s why I went with 8 4TB’s to begin with. I now have an extra LSI 9201-16e which I will repurpose for future expansion to another DAS enclosure of some kind. 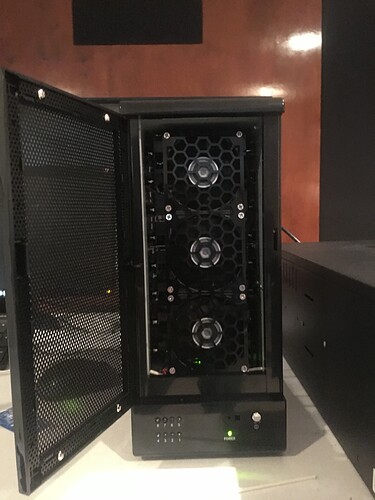 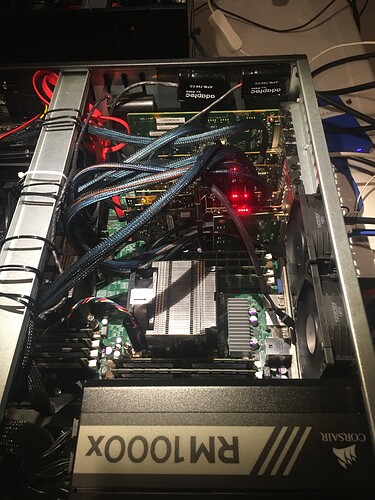 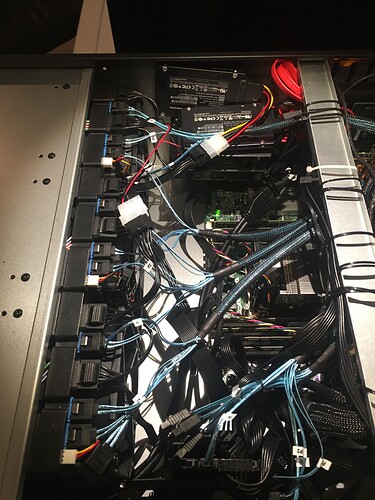 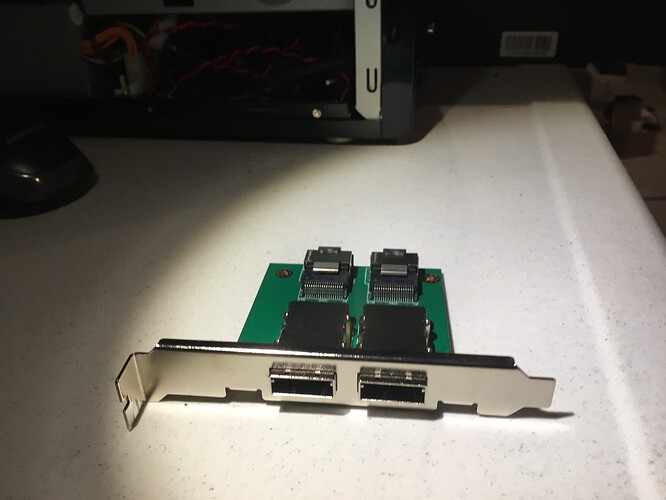 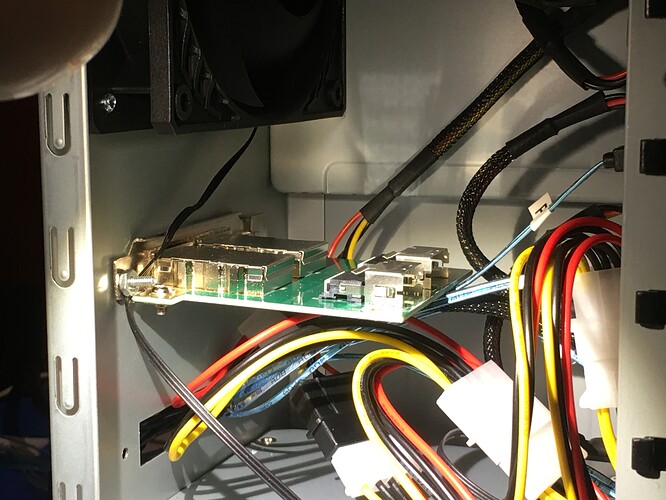 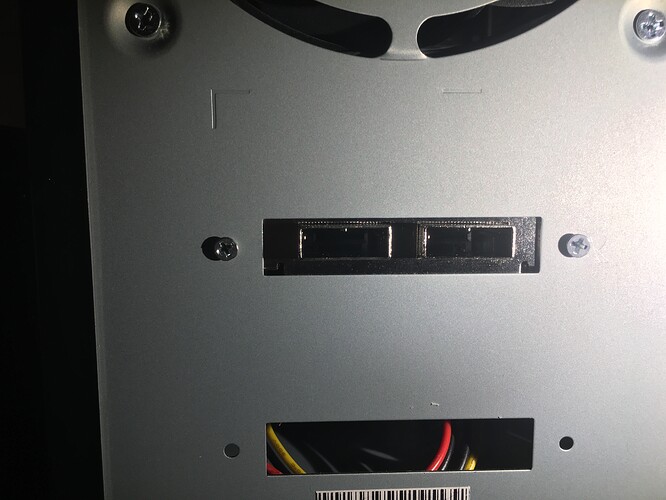 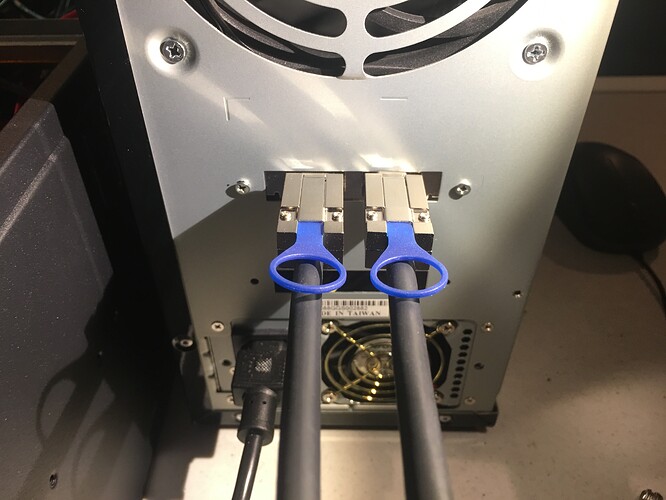 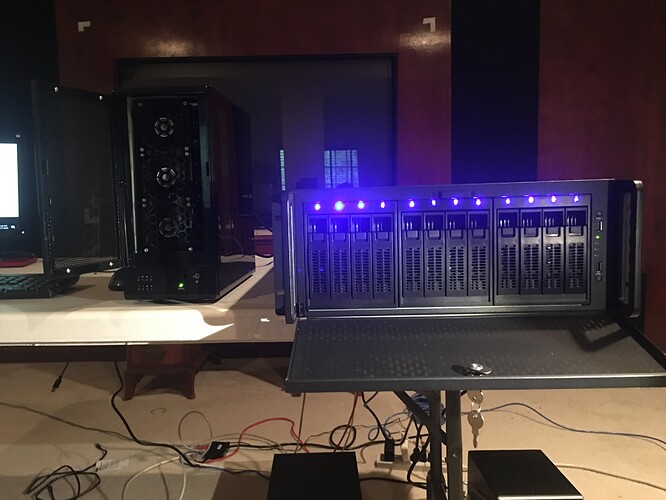 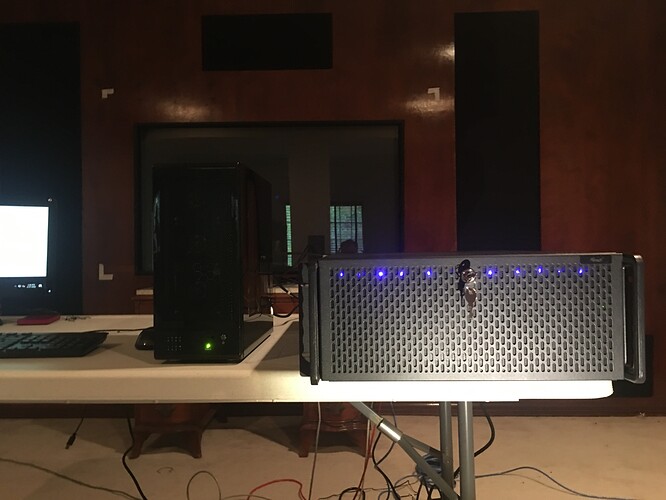 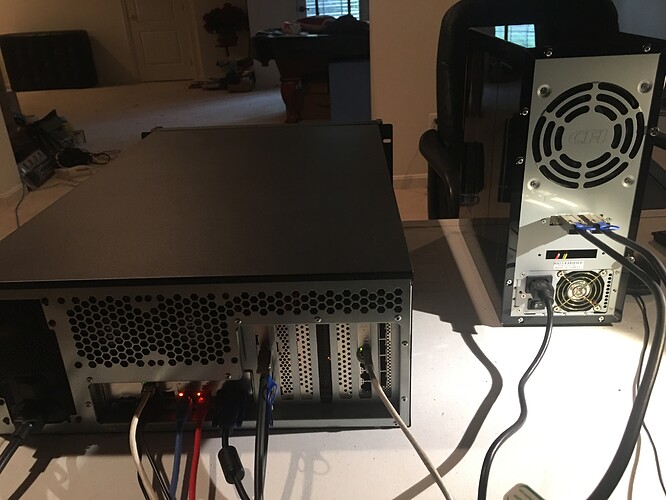 The cable conversion cost $113 in connectors and cables to replace the $30 ones but it is significantly more secure.

Thanks, it was fun to build and expand to the das.