Thought I would share my builds with these boards here as they seem to still be somewhat popular.

Back in early 2016 I came across some e5-2670’s that were being fire saled on ebay… there were hundreds of them from multiple vendors and they were cheap… I wound up buying two of them for $88 each and thus started my search for a dual 2011 board. (Rumor at the time suggested that some datacenter somewhere was decommissioned and these were pulls)

Being a Gigabyte fan, I was super intrigued when I came across the GA-7PESH2 on eBay. Most of my server builds I do for work are all Supermicro. For whatever reason Gigabyte server stuff isn’t readily available in the normal retail channels.

Long story shortened, I wound up buying two of them, one for my Unraid server, and one for my daily driver.

My daily machine I have recently upgraded to an AMD 5900x and x570 board, but the dual xeon’s will soon get a new home in a workstation at my office.

It’s final specs were:
(2) Xeon e5-2667 v2, CM 212 EVO HSF upgraded to Noctua fans
(upgraded the CPU’s about a year ago)
Samsung 970 PRO NVME SSD (Bios-modded the board to support NVME boot)
Gigabyte GTX1060
Gigabyte USB3.1 Card
ASmedia USB3 Card
128GB DDR3 ECC 1600
Corsair Commander Pro ( for case fan control)
Win10 Pro (1909 was the most recent install, but no issues)
Modded laptop pwm fan onto pcie to m.2 adapter to cool the 10GB nic and SSD, powered 24/7 by external 5v power brick ( I went through multiple iterations of this but this was the most reliable and quiet)

Here are a couple of pics from when I was tearing it down to upgrade: 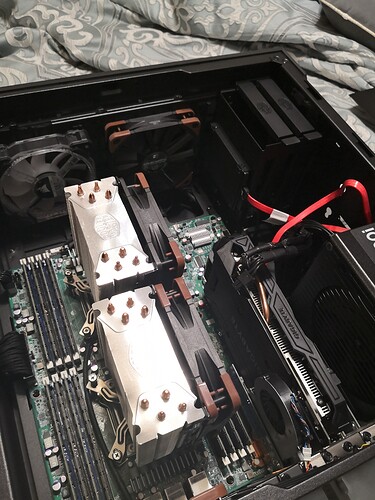 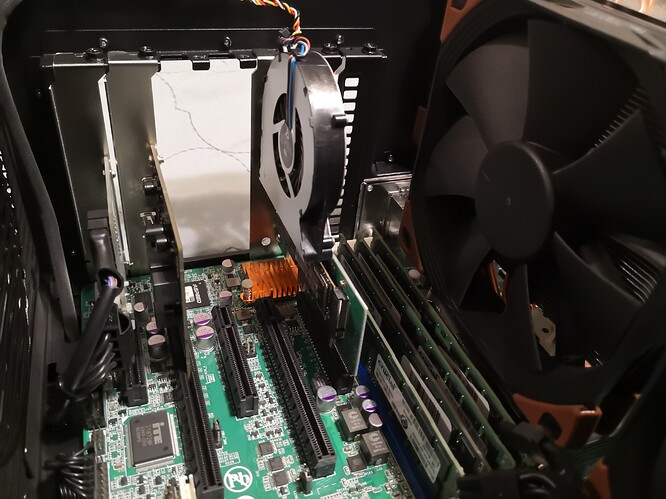 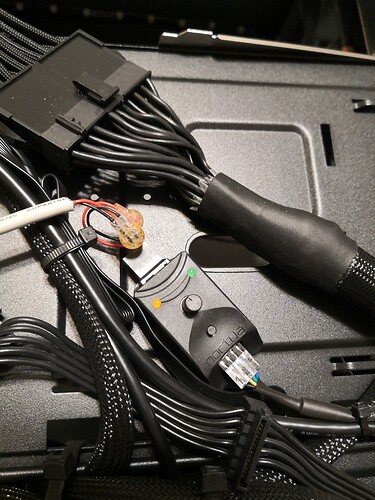 My Unraid server is still in production but will soon be replaced by a build based on a 5600x and the Asrock x570d4u-2l2t.

It’s a little more modest, and power consumption was a concern, so it’s only running a single E5-2630L and 64GB of 1333 memory. It has a similar cooler on the 10GB nic, but not quite as refined as my main build.

Here’s a handful of pics from my server when I moved it into it’s 4u case… pretty much a perfect case for this board as it was short-depth, supports EATX and still has 8x hot-swap bays. 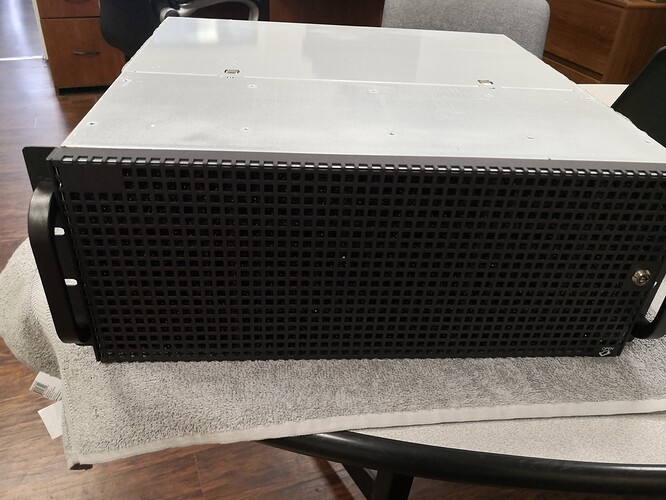 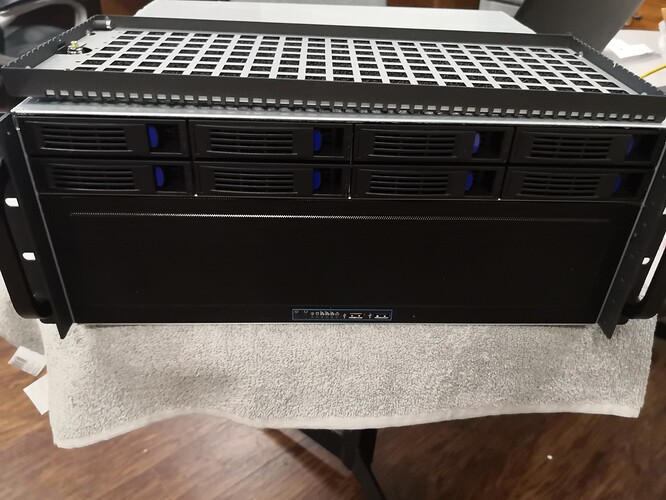 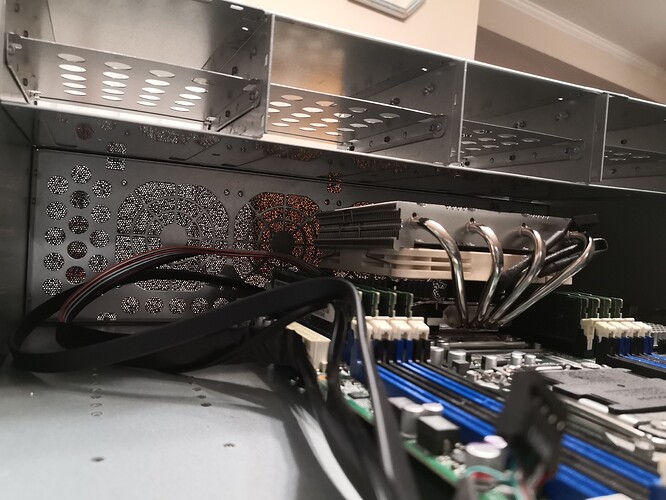 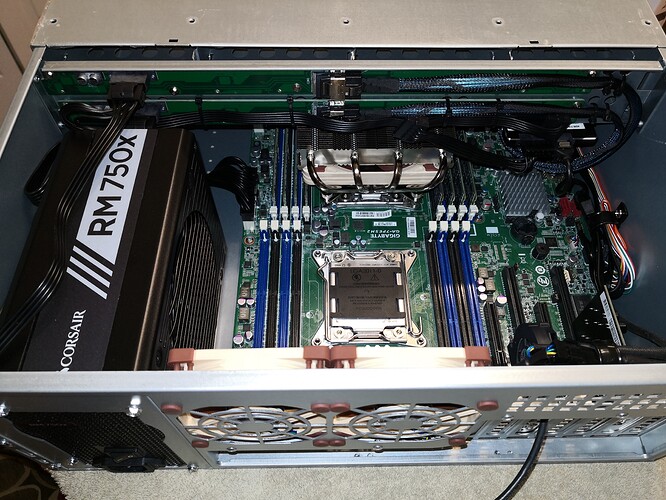 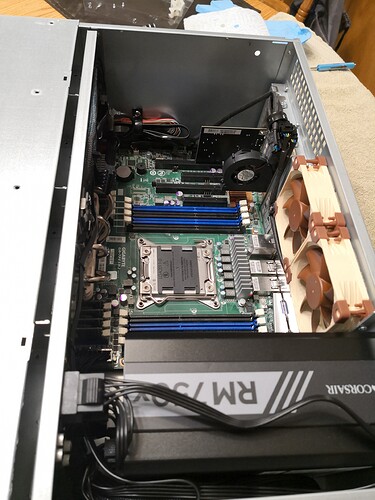 Very cool builds, thank you for sharing! Most curious was finding the boards on your own as I don’t think I have heard of many people talking about them outside of this community at the time.

I am looking for one of these boards. Mine has a bad CPU socket and I need to replace it with a good working board so I can get full access to all the RAM I have installed. Anyone know where I can get one?

So, I was wondering if you could provide that modded BIOS for the NVME booting. Right now, I am booting from a Samsung SSD pro 1TB.
Thanks.

Why do you need to boot from NVMe?

Two reasons:
If I can improve the boot time, obviously that is nice.

In addition to that this board does not support suspend. Since I am using it as a workstation, the only solution for me is to use hibernate when I am ready to end the daily work. Hibernate works fine on Debian and I am using a dedicated SSD as the swap partition. Of course, I would like to move that in to a NVMe drive if possible so that I can resume relatively quickly (at least that is the hope).

I would not say that it boots faster… hard to say really but I don’t remember it being all that much faster than booting from sata.

I think the key to keeping these going is proper cooling on the 10G chip. I mounted a 5v cooling fan out of a laptop to my NVME to PCIE adapter so it blows over the NVME drive and directly onto that copper heatsink. I just wired it to the 5v on the PSU and connected it to a Noctua 5v PWM controller.

I will dump the file and link it here as soon as I can.

I think the obligatory “flash at your own risk” applies here, but I backed up this file from my working machine that is currently booting from NVME using the command: afudos backup.rom /o
And remember the NVME support is UEFI-only, so you will need to set the bios as such.

And here are my notes on the mods I made back when I last worked on it: