My cobbled together 5.0ish build

Documenting my ugly 5.0 build. The heart of it is an old OptiPlex 7020 SFF with an I5 4590 that I got on marketplace for cheap. It has 16 GB of ram on the board. I pulled it out of the OEM and put it in an old desktop case with a CX430 power supply that used to be an old HTPC back in the early 2010s. Notice the OEM fan and the USB header laying on the right side of the case. They have to be plugged into the board in order for it to boot. The OEM power switch sticks out the side of the case. The USB unraid boot drive is a LEXAR 32 GB. The case has 3 3.5 inch bays that have the 256GB WD SATA SSD (Cache) and two shucked Seagate 8TB Barracuda Compute Drives. The case also has 3 5.25 drive bays one of which has an 8TB WD shucked drive (the parity drive) in it with a bay adapter. The motherboard has 3 SATA ports which have the Cache the parity and one of the data drives hooked up. The last drive is hooked up to an ebay LSI 9200 with the external cable fished back into the case. The case has 2 slots for 60MM fans in the back one of which is empty and one of which is a Noctua fan. I have a second fan on the way. The case was missing the card slots for the unfilled expansion bays. The WD hard drive was running pretty hot so I duct taped up those holes an now its running quite a bit cooler. 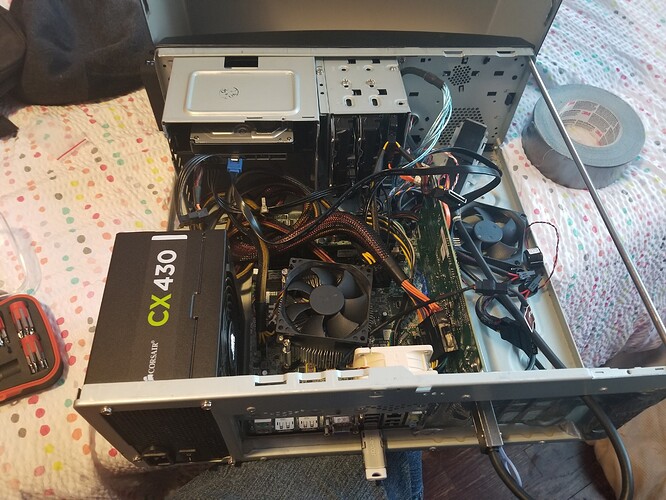 We all have to start somewhere! Looks like you have a good candidate for switching to an even better case, such as the Cooler Master N400.

Yeah there likely will be a shift to a better case at some point however the current setup has room for 2 more drives and I have about 10TB free right now. If I upgrade the case I will likely shift motherboards as well. Does anyone have experience moving unraid to a different set of hardware? It seems like the license is locked to the USB drive?

Yes, the license stays with the USB.

Migration is very easy. You just have to make sure that Unraid properly identifies the drives again in the right locations. Once that is confirmed, it should boot up just as it was with the previous hardware.

I have the N400 for my new build. I like the tool-less HD bays but the suck is they only give you four connectors - you can mount a whole two drives this way and need screws for more. So I will not recommend this case - i have been completely unable to source additional connectors so this is NOT a selling point for the case - it is NOT tool-less, effectively.

I really like the LIANCOOL 205 in white, but it needs a bank of HDD cages behind those front fans - not sure where to get something that will mount in there.

Why is it so hard to find large cases with multiple drive bays these days? I suppose every build requires 15 triple-fan water cooler setups in them, jexux chrixt

This is a silly reason. I literally get the N400, open it up, and throw the tool-less ones away. Drives should be secured by screws, and they give you plenty to secure 8 drives.

well that’s true. i have about a million hdd screws. But i prefer not to have to remove both sides of the case to do it. Even the simple sliders used in the rosewill 4500 are miles better than screws. The only downside to that case the need to remove the drivebay at least partially so you can take advantage of the sliders.

You don’t, you can just screw in HDDs on one side of the chassis with two screws. They are plenty secure that way.

I will likely keep my eye out for an N 400 warehouse deal when i’m ready to upgrade.