So wanted to share my build even though I did just sell it. I want to share my experience, results, and costs for others to reference.

2x Raijintek coolers- $25 for both

Do I started off with the motherboard I planned on the x9dre and built around that, until 4 days after I had purchased it and all the other pieces less the drives and v2 processors. Ebay seller tells me he cant find the board and said he shipped me the x9dr3-lnf4+. So win win right.

I get the board and realized I should have followed the guide for case reccomendations as even though the rise is a eatx case this board BARELY fit after removing the 5.5" drive bay. But it fit and I was thrilled.

I was waiting on my psu splitter when I found 2 2650v2s so I grabbed them cheap. Then I realized v1.1 are not compatible with v2 without bios update to 3.xx and I was tossing it up as a loss after reading even after bios updates v1.1 boards didnt work with v2 processors.

Got my splitter and finished assembly without the sas drives since I only had 2 3.5" bays. Booted right up and I was a happy labber.

After installing proxmox and learning how to use it (poorly) I decided to try the v2 processors since my mobo came with bios v3.2…I hit the power button and BAM

So both v2 procs work and im running different things on vm’s and programs and quickly realized that this thing is overkill for me. I 3d printed a drive cage so I could dock 8 3.5" drives and 2- 2.5" total while I played with proxmox. And this was the final result of my build. I loved that I had this all crammed into a “standard” pc case and was for the most part low profile. 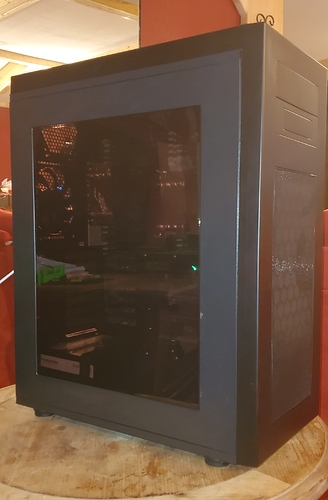 I can barely stumble through proxmox but I didnt need this and it would better suite someone else who could use it. So I opted to sell everything and build something less powerful to learn and grow from. But this was the most fun build I’ve had for a computer and my first server / homelab experience outside raspi 3b+ for my printers / gaming pc.

So that’s it! Let me know if you have any questions or anything I’d be glad to answer!

Hi, sweet build, i did a lot with them a while ago and they are still rocking today.

is it still available…

Hi, thank you I really enjoyed building it and using it. No I do not! Last parts shipped out Friday!