So, my build predates NAS Killer 5.0, but it’s similar enough that I thought I would share it with the community. Built her back in 2010 as an AMD Phenom II 945 machine and then updated in 2015 with the current Intel chip & board. Over time, she evolved into a NAS. Sheer luck, I suppose, that she ended up in line with the recommendations to build a NAS Killer 5.0

The rig is used as a NAS (duh!), a Plex Media Server and runs all of the *darrs, Tautulli, SabNZBd, Deluge, etc. She also has the ability to transcode with a 1650 Super installed. Next time I upgrade CPU & motherboard, she’ll switch over to QuickSync transcoding.

Following the structure of the official NAS Killer 5.0 guide, here are the components:

If you’re on the Discord, you’ll have likely seen that I’m having trouble getting the rig to recognize my LSI 9211-8i. I’ve narrowed it down to a faulty card or an incompatible motherboard. In the process of getting a refund or exchange for the HBA card so I can try a different card. If the second HBA card doesn’t get recognized, I plan on replacing my motherboard.

Feel free to ask any questions or share any criticism

It’s much more likely the card is defective than the motherboard is incompatible.

I agree and this is definitely my hope. Thanks, JDM

Issue was a faulty HBA. Got the new one in yesterday and it was recognized immediately. Proceeded to flash FW 20 IT mode and the card works great. Added in the HP SAS expander and was able to upgrade that firmware to 2.10 (which I understand can do 3 gb/s SATA while older firmwares were only 1.5 gb/s SATA). 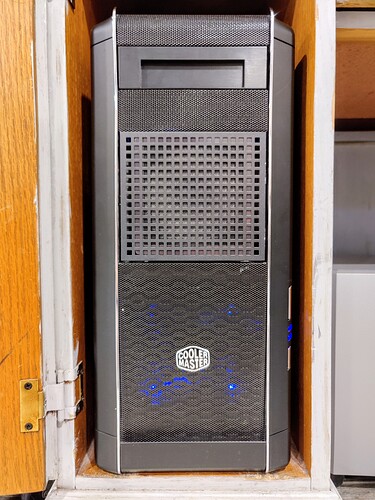 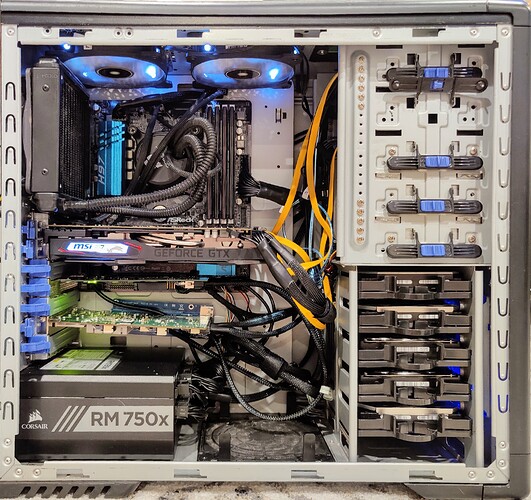 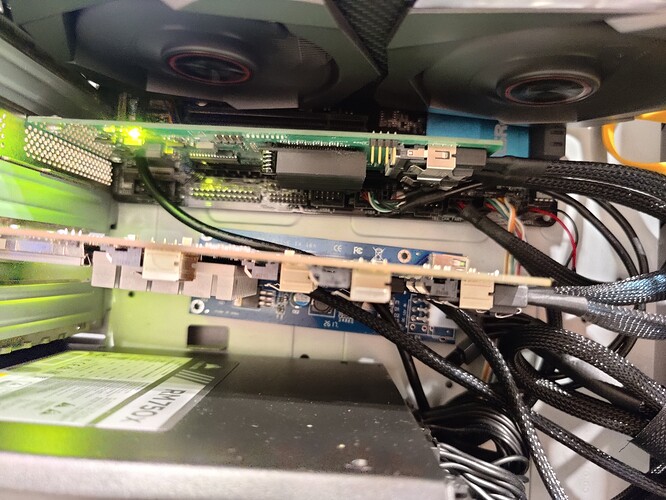 I forgot to mention in the original post that this rig has a 1650 Super (MSI Gaming X card) since the rig functions as my plex server too and the GPU is used for transcoding.

OS is still currently Windows 10 Pro. Once my two 12 TB drives from bitdeals come in, I’ll begin migration over to unraid

Just so you know, you can only transcode 2 streams with windows and that card.

The top exhaust fans are Corsair AF120 silent edition that I purchased years ago. They’re fine, no reason to replace yet. 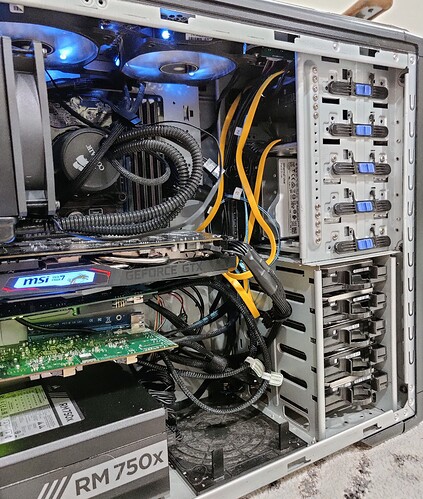 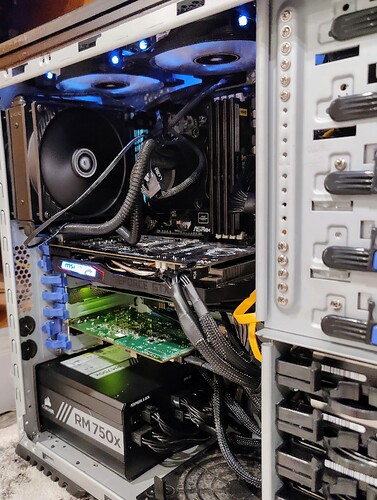 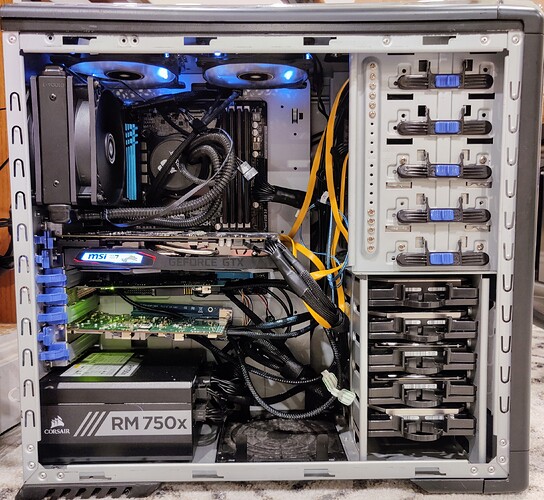 Arctic fans to the rescue again!

I wanted to share a couple of updates as my build continues to evolve. Since I setup a separate QuickSync Plex box (HP Prodesk 400 G4), I no longer needed the 1650 Super GPU in my NAS. This freed up a PCIe slot, so I removed the mining riser and shifted the HBA & SAS Expander into the two PCIe x16 slots my motherboard has.

I also added another one of those IcyDock dual 2.5" + single 3.5" adapter for 5.25" bay. I think they’re pretty nifty and a good use of space. They fit two SSDs and a 3.5" HDD. Great for an old case like mine which doesn’t have any dedicated 2.5" mounting points.

Internals are a bit cleaner now. Pics below. 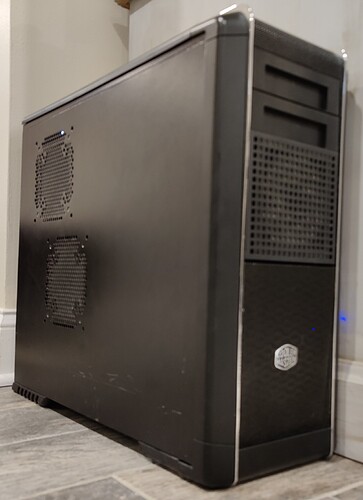 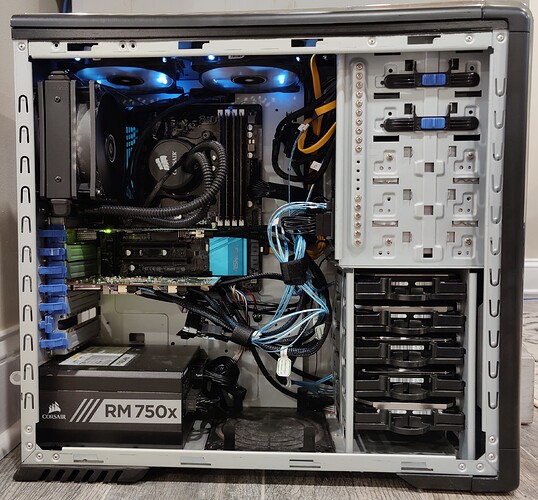 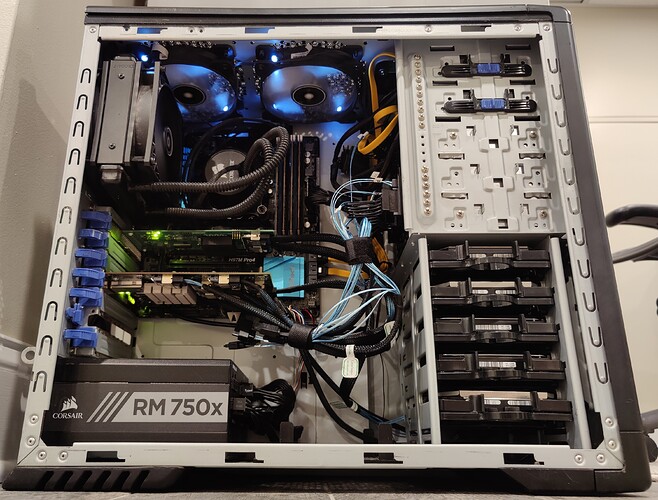 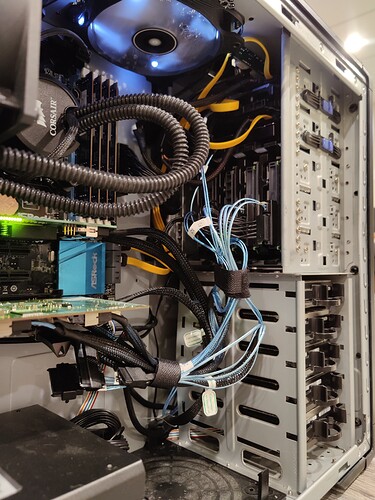 I also forgot to mention other minor changes: