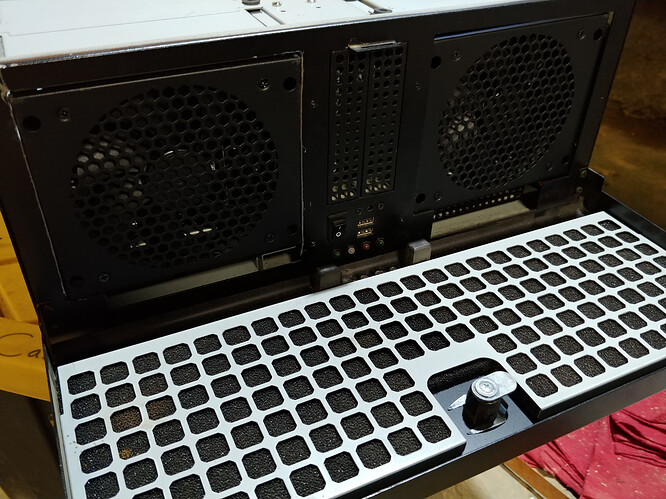 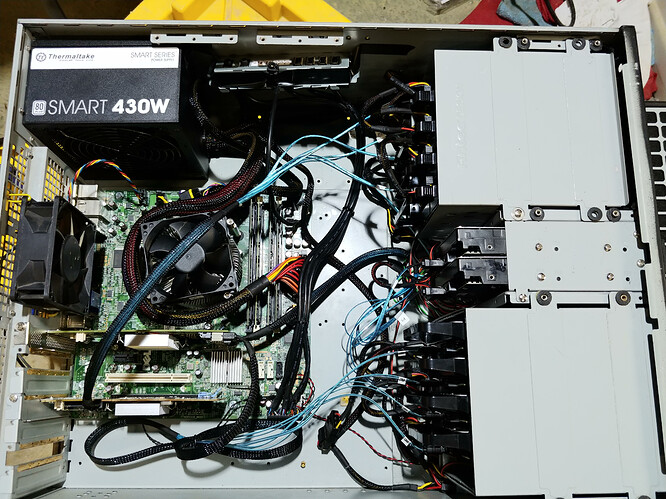 I had an old Dell T1600 Xeon workstation with a fried PSU and a bad stick of RAM at work. Not worth buying replacement parts for, but perfect for a project! My primary server is a Dell R710 running ESXi, one VM being freeNAS. Since I had some extra parts and 2TB drives laying around I figured why not play around with replication and build a backup server?

I had a few 2TB drives from a server that I was given from work, and a friend had a few more that I bought for cheap. All together that made up 12 drives. Since the Dell board has 4 ports, I ordered a Dell H200 controller and some SAS to SATA cables. I also had an oldish power supply that was still testing fine, so I threw that in as well. Not many SATA power cables in it due to it’s age, but I bought some molex to SATA extenders (the non-fiery ones).

I think the biggest challenge of this build was the Dell proprietary crap. Temp sensor, power/reset/light switch thing, front panel connector w/ status lights, and to top it all of a non-standard 4-pin chassis fan. If you don’t plug any of these in, it will not boot unless you turn off all warnings. I kind of like warnings for important stuff, so that’s kind of a drag. But whatever, I just pulled that stuff out and stuffed it in my old Antec rackmount case from circa 2002.

I had to fight a bit with the BIOS to get it to boot from the freeNAS boot USB stick, but after that it was pretty easy to set up, as freeNAS usually is. I put the 12 drives in a raidz2 pool, and set up replication with my primary server. Total copy time for 10TB was almost 3 days (over gigabit). The server gets powered on once a week to receive the most recent snapshot replication, then I shut it down to save on the power bill. I still can’t get it to wake on LAN, even though the option is set in the BIOS. Ideally, I could script a WOL command once a week, enable my replication task, then shut down the backup server when it’s complete.