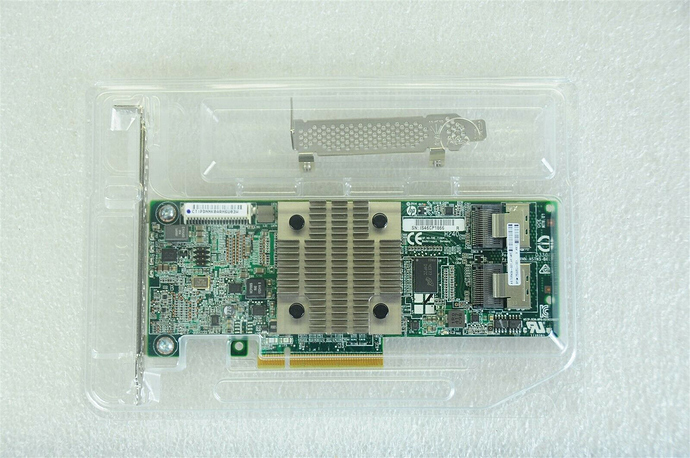 Thanks, bought in on this and received it already. Been trying to flash it to IT mode, but is it the same as with the LSI 9201/9211 8i? Or requires SAS3 flashing?

This is not a LSI card and doesn’t have the same process to change it to IT mode.

There’s some info on servethehome below - I haven’t had time to comb through it yet.

So... there may be some obvious reason why they are not popular, but the H240 seems to ridiculously cheap compared to LSI/Broadcom SAS3008 based cards although they have similar specs. Specwise there isn't that much to say, SAS3, two ports (although...

Ty. Was able to go through it. I was able to get the card for $30 for OBO if anyone’s curious.

I was able to get one of these cards running and although the card’s bios utility is reporting 12Gbps I’m seeing closer to 10Gbps in Crystal Disk Mark. So I’m wondering why is it limited to 10Gbps? I know the original post says that’s the limit but I’m not clear on why.

It’s likely because the card uses SFF-8087 cables, which have a peak throughput of about 10Gbps per lane.

Do you have a source for that? Only place I’ve been able to read that is on this post.

I guess this card is really unique in that everyone else switched to SFF-8643 for the board side connector
(HD MiniSAS) but HP held on to SFF-8087 for one more generation so perhaps that’s why there’s so little information about max supported speed.

These standards are a rat’s nest, unfortunately complicated by marketing and unwitting vendors.

The SFF-8087 (and 8088) is a standard for exclusively the mechanical connector shell/plug. The actual electrical connection specification accompanying the 8087/8088 connector is the SFF-8086 standard, which is a 4-lane solution rated at 10Gbps per lane. It is rarely used for SAS3 applications for this reason - negotiation will work, but throughput will be limited to the maximum the connector is electrically capable of. An 8087 SAS3 card exists for the purposes of maximizing profits.

There is a similar conflation with the SFF-8482 standard - SFF-8482 is for the mechanical structure of the dual 7-pin + 15-pin connector set. It defines the physical structure and mating, pin offsets for contact sequencing, means of retention, etc. It has been paired with several electrical specifications, particularly SFF-8678 (originally SAS1, later updated to SAS2), SFF-8680 (originally SAS2, later updated to SAS3 - this is why 6Gbps is not mentioned in the SFF-8482 document when they mention the specifications used in conjunction), and SFF-8681 (SAS4). The actual cable names should be according to these electrical specifications which also refer back to 8482 and thus encompass the whole connector assembly, but they are not. Most SFF-8482 cables you see for sale are likely SFF-8680.

All of this information is based exclusively on the standard documentation available from SNIA, ECIA, IEEE, etc. All of the above is spread across the SNIA documents for those standards explicitly mentioned, and maybe a few others that are more general (SFF-8024 perhaps) - the other sources may be useful for additional context on design choices. Many other things you have read on this topic are liable to be wrong, and are probably based on marketing material from vendors - anything that does not explicitly reference the actual standards is probably based on inaccurate sources (I’m looking at you, Wikipedia).

I got one of these cards recently. It’s… fine? It was already in IT mode so no special effort required.

I actually tried to boot with the HP SSA on a flash drive to configure it, but the flash ISO wouldn’t boot. So I gave up because I didn’t need to change anything anyway.