What are your reasons for recommending 19.04 over the LTS (18.04). Would the LTS not be preferred for long term stability?

19.10 will actually be the new recommendation when I have time to update the guide.
18.04 does not support all of the necessary codecs and whatnot for HW transcoding.

Thanks that’s good to know.

My server is too old to have quicksync hardware but I was reading through the guide out of curiosity.

It’s certainly tempting. The whole reason I found this site/this thread was that I saw your “Resistance is Futile” video on Reddit.

The thing that puts me off using the 290 is that I really want to only have 1 “box” running. I need, right now, a minimum of 3x 3.5" drives (2x Media Storage and 1x Snapraid Parity). I could stick a cheap SAS card in it and just run the cables out the back as a hackjob but then I’d need a PSU for my drive cage backplane…

Why does it matter if it’s “one box”?

It’s already been a battle with the GF.

Why does there have to be another computer?
Why can’t you run it off your laptop?
What if we bought a new better laptop between us and had one “family” computer instead of 3?

There’s no way I can navigate having 2 machines running in the basement!

Start picking apart her hobbies then…
If you get married, it won’t get better!

That sounds like pouring gas on the flames. A couple of sick days where she texted me the name of a show and was watching it on Plex 5 minutes later was enough to sign a peace treaty on this one. But I don’t need to start it up again.

Hi @JDM_WAAAT
Thanks for the nice write up.

So thinking to build a plex transcode server, as I found out what I had was a gen 4 intel, which with hw transcode looks awful.
So looking for upgrade, a Hp 290 is hard to come by in Denmark it seems.

Anyone have some suggestions or advise for the above.
Would be much appreciated

Great writeup, it convinced me to upgrade my PMS server hardware that was long overdue. I went with the HP Prodesk 600 G4 Mini (used from eBay) and its awesome! My 10yo 6c AMD processor could only transcode maybe 3 concurrent 1080p sources but I’ve tested up to 10 transcodes on the HP and so far its smooth as butter. BTW, I’m using Ubuntu 18.04 since 19.04 is out of support already. No issues with 18.04 so far and I’m getting HW transcoding for Live TV and other media.

Hey everybody…I’m considering the ProDesk 600 Mini and I’m wondering if anyone has tried swapping out the optical drive with an ssd (I used to do this back in the day with laptops, and still have one of the adapters). The idea would be to use that as the OS/applications drive, and install another larger drive to accommodate the needs of things like Sonarr and Radarr.
I guess I’m asking if this is a waste of time, and should I just find a 1TB SSD to hold it all

The QuickSync capabilities will be the same with i5-9500, but the availability in your region makes it the better choice by default. I don’t know the European market pricing, but I’d go for it if it seems reasonably priced.

Thanks for the advice and info

Actually what about a NUC like
Intel NUC8I5BEH - Core i5-8259U
Got a Intel Iris Plus Graphics 655, I believe that would good?
Anyone have any experience with it or thoughts for it. 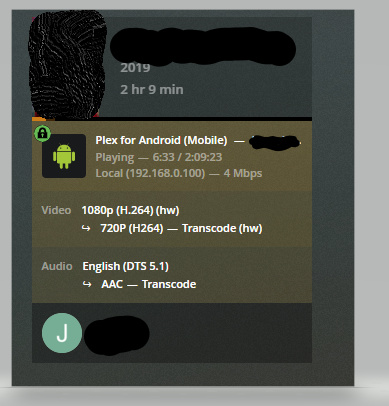 All seams to be fine, i can see HW on both lines Video and Transcode and CPU usage looks ok.
Just for testing i’ve tried transcoding for a 4K stream, it is 10bit HDR, i know color is a mess and i should not share 4k content but still i wanted to try how HW transcode behaves.
CPU usage goes strait to 100%, playback is a mess it stops every 20 seconds but what i really wanted to confirm is if it normal that HW is not shown next to the main video line and is only on the transcoding line? 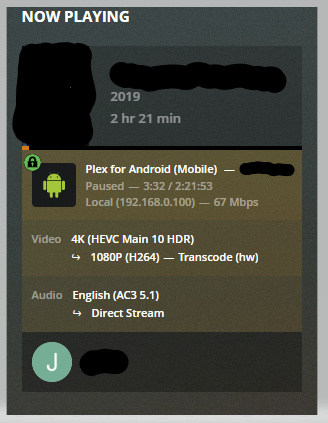 Your hardware is working as expected, but here’s why the 4k transcode isn’t working:

There are 2 parts to transcoding video: Decoding, then Encoding. If the hardware decoder is not capable or compatible with the video format used, plex falls back to software (CPU) decoding, but may still use hardware for the 2nd part, encoding. In this case, HEVC HDR10 is incompatible with your hardware.

Just got my HP 290 build up and running (basically same specs as the recommended build in the owners’ thread except with 256gb NVMe drive).

Ironically, I have an anti-transcoding question. I am trying to run Live TV / DVR via HDHome Run Extend (which has built-in HW transcoding as well). However, I get a ton of rebuffering and jerkiness when viewed on my Roku Streaming Stick +.

I originally tried this with transcoding enabled on the HDHome Run by choosing “Highest Quality” (just below original), but didn’t seem to help.

I then attempted to disable transcoding by putting HDHome Run back to “Original”, and then in the Roku menu choosing “Force Direct Play” and “Allow MPEG2” streaming, but still ended up with stuttering.

Anyone here have a successful set of settings for pushing HDHome Run Live TV/DVR through Plex–>Roku?