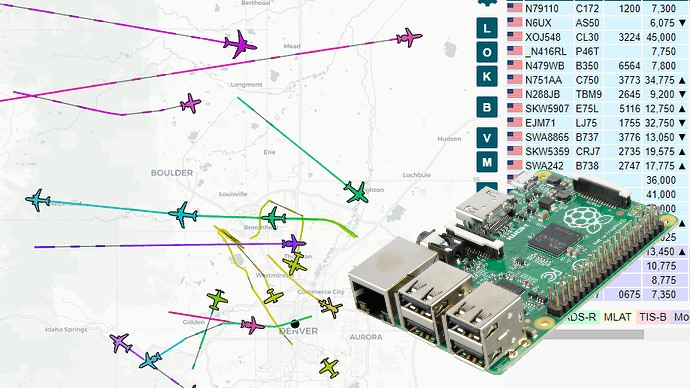 This project focuses around building an ADS-B receiver and delivering data to FlightAware. There are other sites you can deliver data to, such as The OpenSky Network and ADSBexchange, but that’s up to you!

If you have questions about any of these terms or if you feel they are incorrect, please let me know. I’m happy to elaborate or correct any errors. I’ve done my best to keep it simple and accessible.

ADS-B stands for Automatic Dependent Surveillance-Broadcast (read the Wikipedia article here).
Basically, it’s a system that both Pilots and ATC uses to transmit data in real time to each other.

What can we see on the ADS-B receiver? 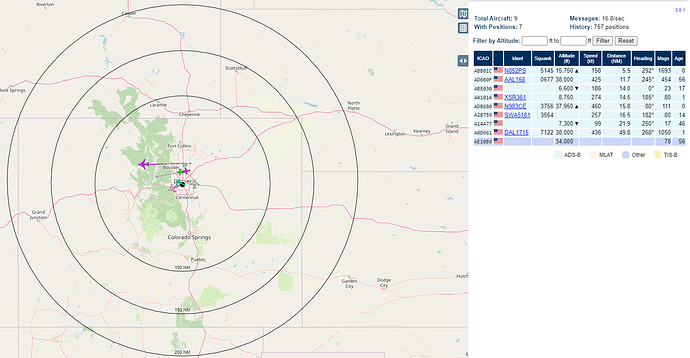 The ADS-B receiver shows an interactive map with aircraft of different colors, pointing in the direction they are flying. The color corresponds to aircraft’s current altitude.

NEXRAD weather information can also be overlayed on the map. It’s cool to see how ATC navigate aircraft around thunderstorms! 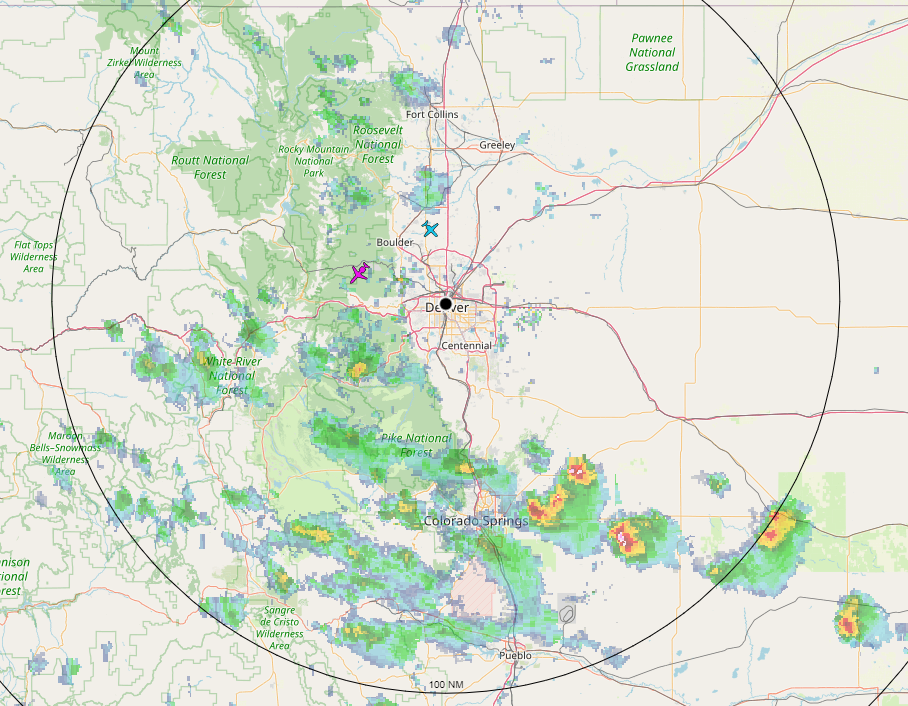 There’s also an option to show aircraft tracks - a history of where the aircraft has been since you have been tracking it. Simply click on the aircraft you want to track, or use the “show all tracks” button to show all of them.
You may notice that there are some dotted lines in the tracks - this is a gap in signal coverage. The airplane’s track is estimated based on last known position. (circled in white) 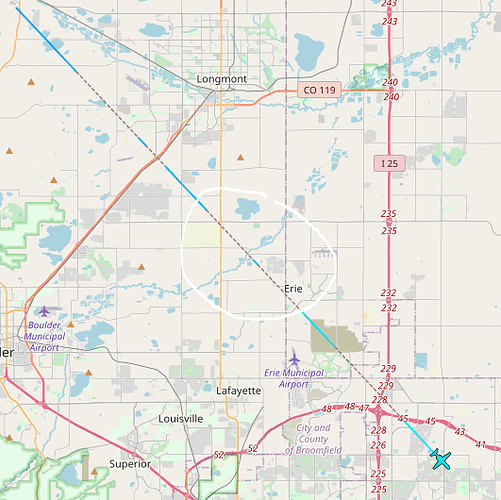 Let’s take a look at the flight below:

From top to bottom, left to right:

Clicking on “See Photos” searches for photos via the aircraft’s registration.
These are photos of the actual aircraft! 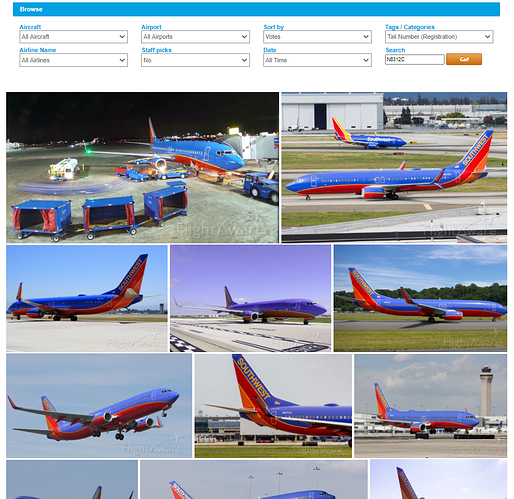 Clicking on “Visit Flight Page” takes you to the FlightAware page for that particular flight. You are contributing data to this page! 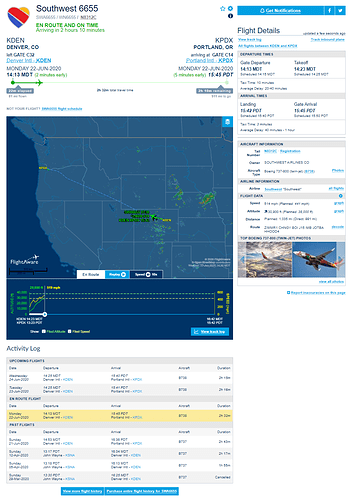 Scrolling down more on the card, the information is pretty self-explanatory: 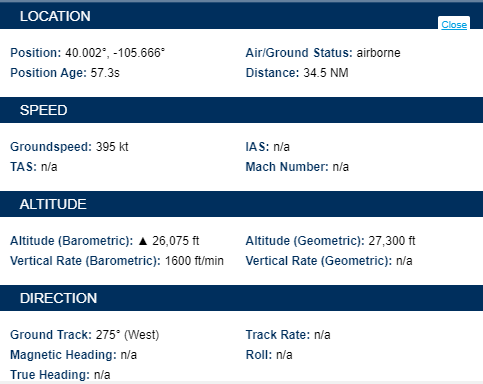 General notes before getting started:

Below are the general parts that you need to get started with this project.

For this project, you need:

For my ADS-B receiver, I’m using a Raspberry Pi 3B+. It’s cheap and it can do everything we need. It has a ton of awesome accessories so you can customize it to your exact need. You can use another SBC, but that’s up to you. Make sure to have a quality 5V 3.0A PSU, as we will be running 3 USB devices. Typical power draw with the hardware listed below is about 7.5 watts.

Some notes about the items above:

There are definitely ways to slim down this parts list and make it more affordable. For example, you can use the included suction cups with the case instead of the suction mount. You could also run the RPi without a case, or you can also opt for just a 1090 MHz SDR instead of both 1090 and 978. Also, the antenna extensions might not be necessary depending on your setup.

Click the link below. It’s very similar to a Folding at Home team! 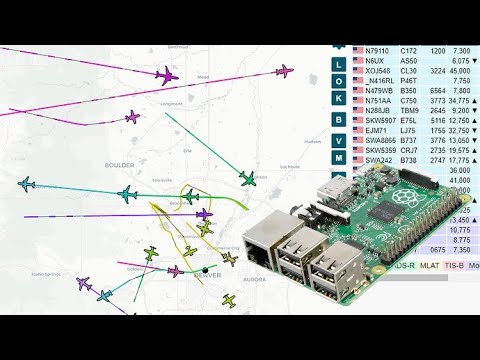 Insert your MicroSD card in the card reader before getting started.

Find Etcher and the PiAware image on your computer. 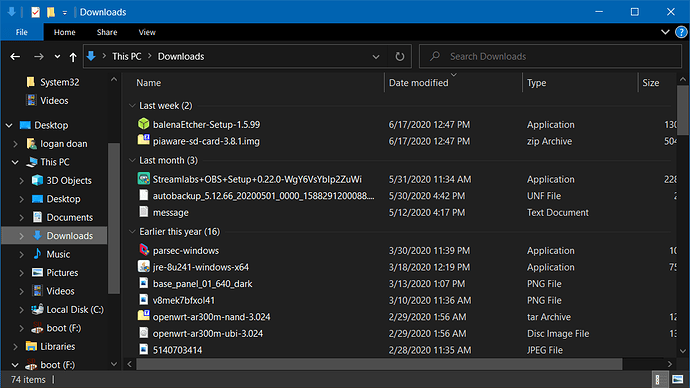 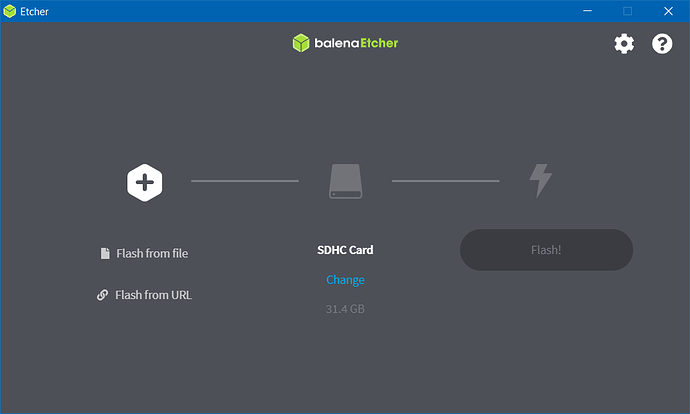 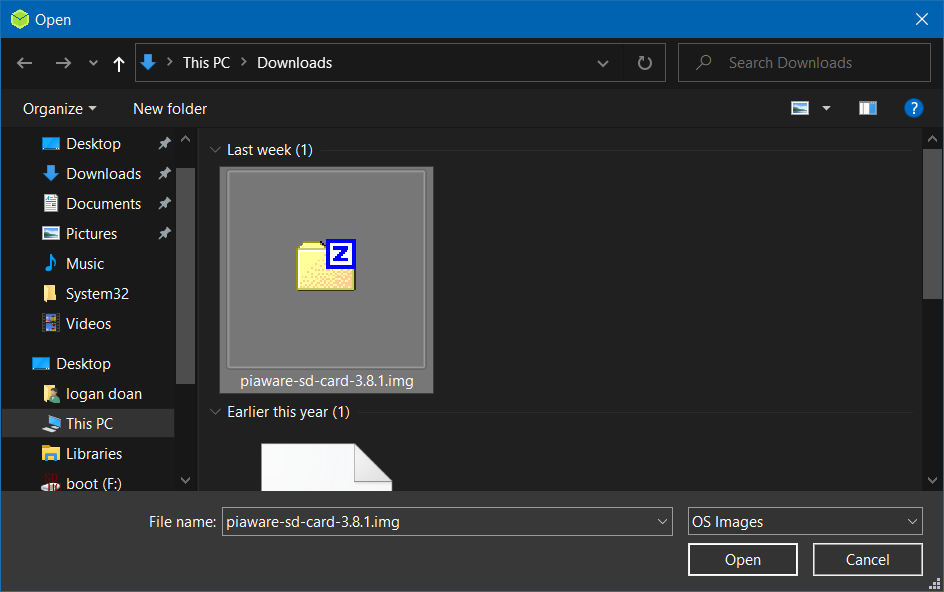 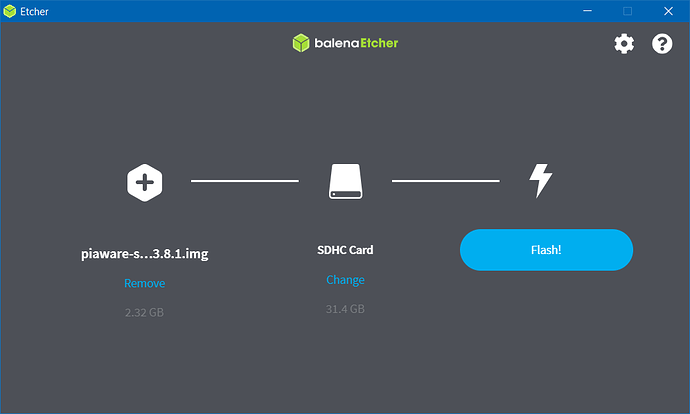 Wait for it to finish… 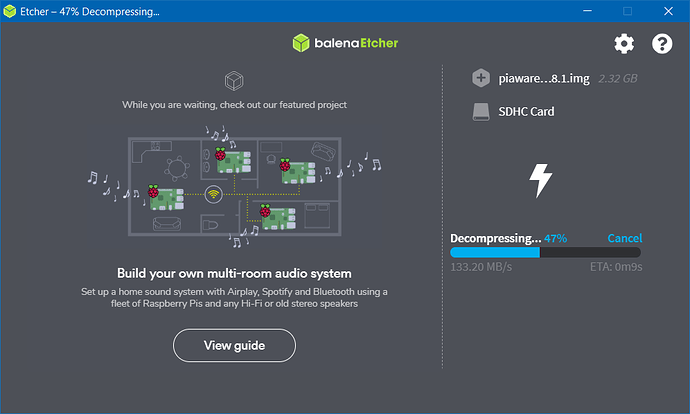 When it’s done, it will eject the SD card from your computer.
Unplug it, and plug it back in. We have a little more work to do. 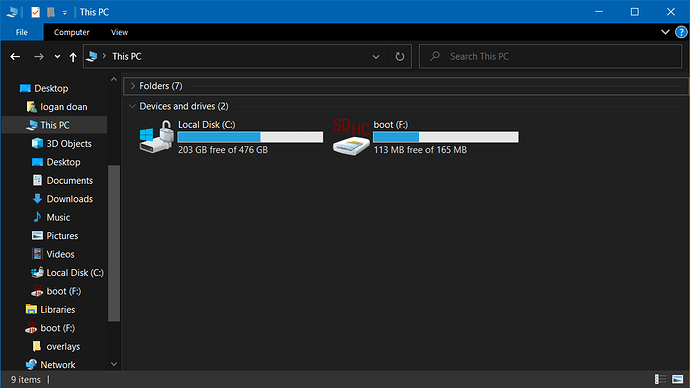 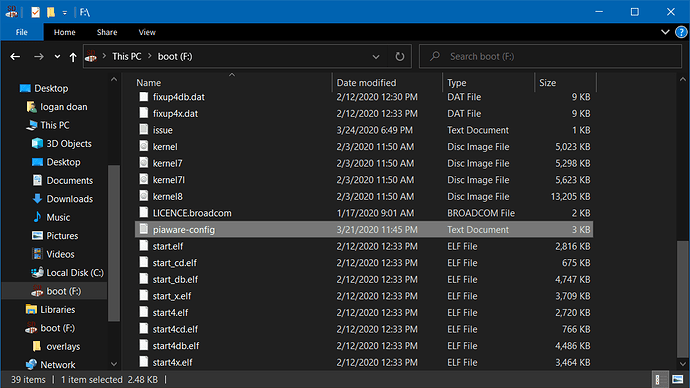 Find the section for wireless, enter your wireless SSID and password.
For this, I’m using my 2.4GHz network for longer range and better connection stability. The speed of 5.0GHz is completely unnecessary for this application.
Make sure to save your changes. 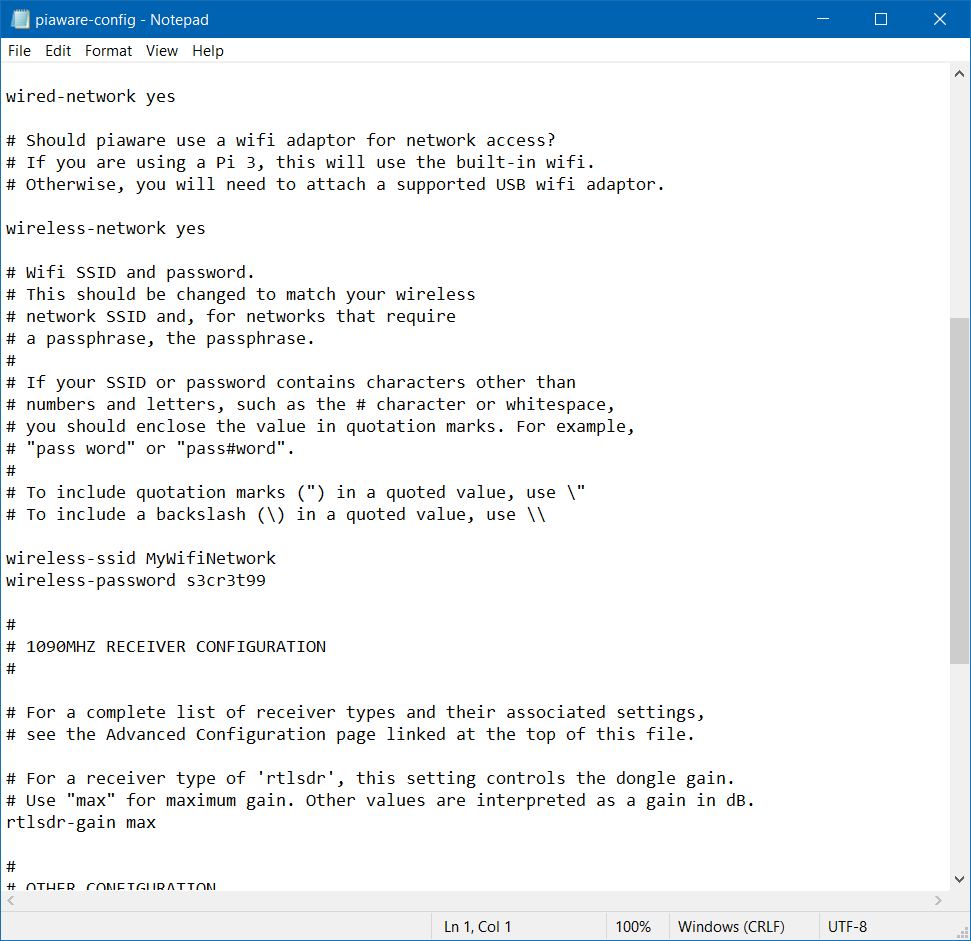 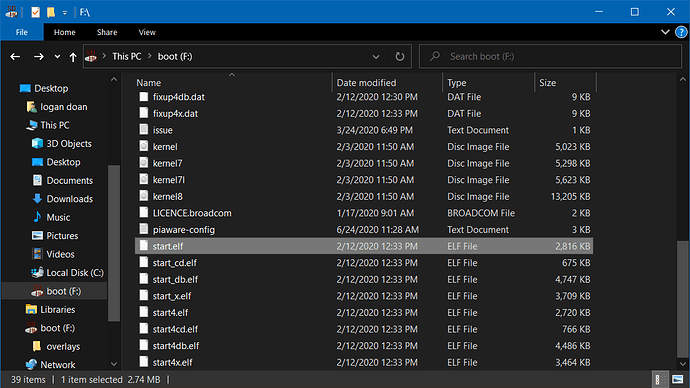 Rename the copy of “start.elf” to “ssh” with no extension. Press “Yes” when prompted. 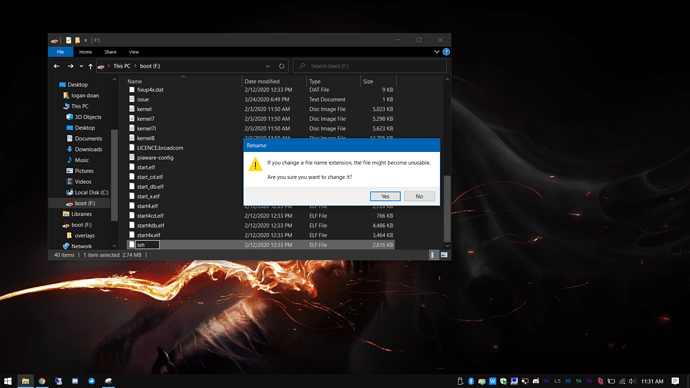 I had to clean the steel(?) siding, as it was well covered with Colorado dust. After the surface was prepared, the suction cup stays put. The magnetic antenna works extremely well on its own, however. The antenna that is attached to the RPi is the 978 UAT, it’s there to pick up stray signals on the chance that someone is using it. I don’t care to spend extra to get an extender for it as well. I’ll figure a way to hide the wires a little better at some point. 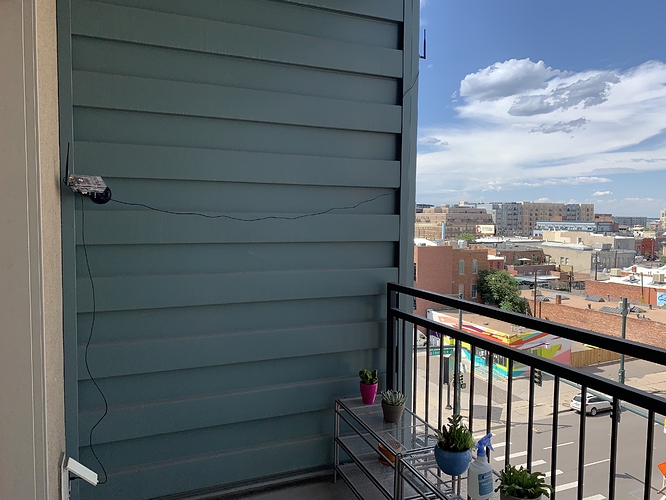 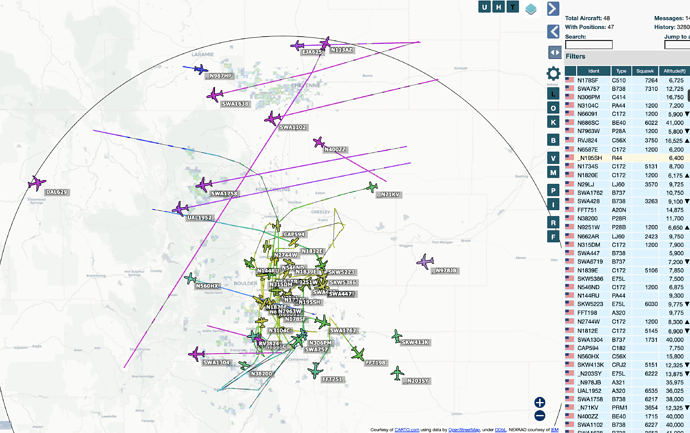 I’m really excited for this build! Been wanting to do something with SDR for a while.

Somebody is having fun. 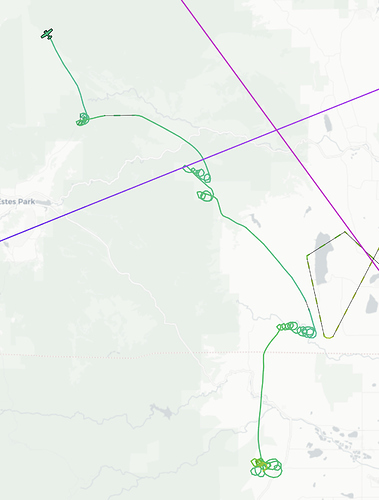 All setup and joined the flight crew - only 3 aircraft in the last 10 or so minutes it has been up and running. Luckily FL is flat, this is being received indoors with the antennas that came with the Nooelec kit. I have an outdoor 1090MHz antenna on the way - the PiAware is also setup for 978 UAT; we’ll see if anything pops up.

If anyone wants to take a look at my stats, here’s an easy link:

Got mine set up and joined the flight crew. Is there a trick to getting 1090 and 978 to run at the same time? I’m messing with the ‘receiver-type’ and ‘uat-receiver-type’ configs, but seems to only run one or the other.

There is a little bit of configuration to do. I’ll have to track down the link I used.

This is the link I used. If you got the same 1090/978 nooelec nano kit which already has the cards marked and the serial numbers are already changed to reflect what each card is for so you can skip all the way to step 6. If you bought your sides seperately then start at step 5.

Before you start on step 6 for the matched no elec cards, in your day window/ terminal issue following command to check the serial numbers for the cards and make note of them because you will need them for step 6 “rtl_test -t”

Then just follow the steps moving on down the guide… I’m on my phone so please forgive any typos.

1 - Download and write Piaware SD card image on a microSD card. http://piaware.flightcdn.com/piaware-sd-card-3.8.0.img.zip Note: When you first boot the image it will look and act like a normal 1090 MHz PiAware. Only in case you want to activate the...

Thanks! Got it working. I didn’t have to serialize the dongles, but I did have to run rtl_test -t to see the existing serials. Mine had the format: stx:1090:27 and stx:978:28 and plugging those into step 6 did the trick.

I had issues with my 978 (UAT) not reporting anything. Looking at syslog, I was seeing “Abnormal exit” after a “TIMEOUT” from SoapySDR. It looks like the driver wasn’t connecting and getting “usb_claim_interface error -6” errors.

I verified /etc/piaware.conf looked good with the serial= on the driver command.

It wasn’t until I modified /etc/default/dump978-fa.conf to set the --sdr driver=rtlsdr,serial=00000978 that things WORKED! Sounds like mileage varies for everyone, but I’m happy with things working for me and 978/UAT data being reported - https://flightaware.com/adsb/stats/user/justgeo

Awesome; glad it worked! I am in Miami and don’t get much on 978 but I am still waiting for the outdoor antennas to arrive and see how things work then. I even added a cheap usb ublox gps (about $10 on ebay) and followed these instructions to have it automatically log your location in FlightAware. The piaware only updates the location on the site only if you move or once every five minutes.

You can actually use the piaware in a car, and provide updates that way that are associated with your device but have accurate grids based on the gps location. - This is very neat.

then in /boot/cmdline.txt add

and in /etc/rc.local add the line below (before exit 0)

reboot and then, in command line run :
sudo cgps -s and if all went well, you’ll see the gps output on-screen

flightaware auto detects and uses gpsd positions and will reflect on the site.

Had a cool find today. 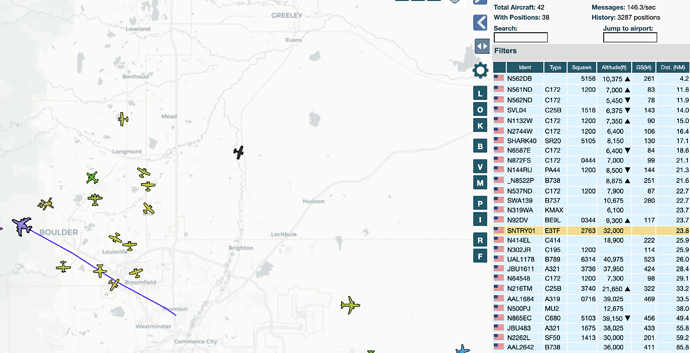 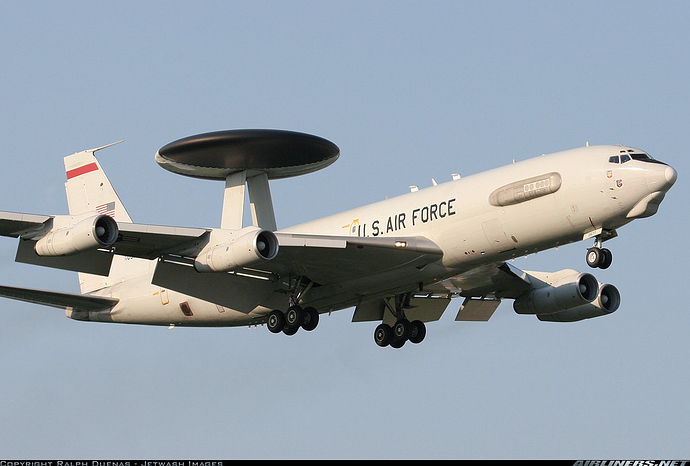 Finally my SDR’s got delivered to build my setup. Not much flying about down in NZ these days, picked up 3 or 4 planes tonight.

Well this is new. I’m now picking up ground crew vehicles at KDEN.