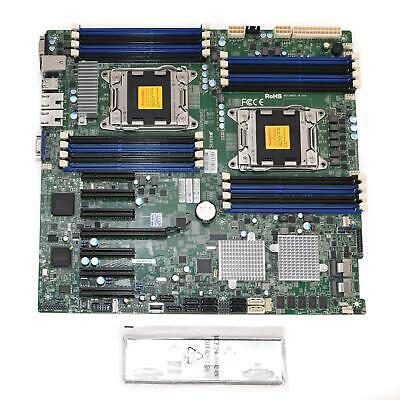 I like the versatility of ATX, personally… and I can’t stand narrow ILM.

Friend of mine is looking to do the anniversary build but we were both very sad to see the PESH2 out of stock. Is that board available anywhere else? There is a PESH4 on ebay but no 10gbe.

He’d probably be fine with a single socket.

Pesh4 has narrow ILM coolers that are expensive or loud

In for this build. Can’t wait to see the full guide and build me my monster.

Wow this is really nicely put together, thanks JDM!

There shouldn’t be a performance difference, it’s the same as having a RAID card in the PCIe slot IIRC.

I un-removed your comment because I think it’s a valid question that’s worth answering.

For the most part, yes, it’s the form factor. Higher demand will drive up the prices of parts, especially on ebay. Which is why you see the little compute board down at $72.00.

Thank you JDM for your hard work. These single cpu boards look like they could make for a nice powerful work station setup.

sorta seems like the X9DRD-7LN4F-JBOD is the optimal choice there (if you can deal with the fan issue of the narrow socket), am I missing something?

I’m looking to build a cheap two processor software development machine. The X9DRD-LF looks like it might do the trick:

I’d appreciate it if folks could set me straight on some of my concerns and point out any pitfalls I might be missing.

Regarding water cooling: I’m not an overclocker and don’t know anyting about this. Is it likely to be quieter for narrow ILM set-ups that the standard coolers listed? If so, is this a price competitive alternative to the conventional narrow ILM coolers if you want a fairly quiet build?

BTW, thanks for all the hard work that went into this guide! The guide is impressive and very helpful.

@samcramer that sounds more like a game machine than a software development machine… For most software development you just need a couple cores (1 cpu) or a vm on a mb with onboard graphics. I built a server for cluster / vm deployments with the x8drd-lf it’s an ok mb for that task if you plan to add an LSI, but that single slot with only two satas is a big limitation for something you want to use as a development machine with a graphics card. Thus why this board is so cheap. If you have a separate desktop just ssh to the server and good to go no need for fancy graphics on a server.

@mikebrow, I see why you would think that, but believe me, it’s a software development machine. The build system (bazel) does a great job of firing up lots of compiles in parallel and touching one include file can cause a lot of files to be recompiled. Thus, the more cores the better. The same holds for RAM.

The graphics card is for driving a 4K monitor on which I edit code, because when it comes to editing source code, the more real estate, the better. I don’t game at all, and the tools I use are all text-oriented, not graphics oriented. There are no rendering-intensive tools involved. Think Emacs, not Eclipse, and kernel programming, not graphics coding.

In this particular application, ssh’ing into a build server isn’t convenient because the directories on these servers (which I don’t control) aren’t NFS-exported and so synchronizing the source between the personal editing/dev machine and the build machine can be a pain. Also, the target is an embedded processor which is connected to the dev machine directly, so an editing/dev machine / build server division of labor is sub-optimal.

I have looked into my mobo options some more, and I’m starting to think that X9DR3-LN4F+ might be a good choice. It seems to me that the single PCI-E slot on the X9DRD-LF is probably a deal-breaker.

Most of the emacs guys I know use tramp/rcp or whatever that’s been upgraded with. So yeah run emacs on your 5k iMac for editing all the files on the server tramp will move the files and do the grep n stuff on the server, everything happens on the server except the viewing and editing. Even the cheapest Xeon for a2 is gonna have 6 cores - 12 threads *2 and you have a shirt load of cores. But they are not running 4ghz with super fast ram. You might want to lean to the workstation examples. I use atom…so I like graphical editing as well.

Should start shipping right around now-ish, announced price of $189.99. It’s pricier than the other options presented, but if you can’t go with a Rosewill rack mount case and/or you just gotta have that supertower bling, it looks to be a beast. Also, if you’re planning on a pfSense build, you can stick it in the same case and “save” the money for the separate case build.

I have some ideas as to what I’m going to do for the rest of the guide, but I’m on vacation till the 9th. This is pretty much priority #1 when I get back, sorry for the lack of updates lately.

Thanks, I’ll fix it

CPU cooling section has been completed.