Earlier this year I decided to replace my old media server setup with something a bit more robust, so I started planning and purchasing for a NAS Killer and finally got it finished.

I was running the *arrs, Plex, SabNZBD, and Transmission. Data was unpacked on the internal 1TB and stored on the external drives. It worked great for the 5 years I had the setup until recently; I originally had a 5TB and 10TB external but right before Thanksgiving the 5TB died so I had to rebuild onto a new 14TB after that I started getting issues with Sonarr not picking up files and the internal drive just wasn’t enough space to rebuild with quickly.

I had actually decided to replace it back in May and bought my Chenbro Combo then but money was a bit tight and I decided to be responsible for a bit. After getting the issues in early December I decided to just go for it and finish the build. And here we are!

I did order 6 of the SATA to SAS cables, but somehow Amazon lost 3 in transit and they were out of stock so I had to switch to the adapters and SATA cables last minute.

I have got everything up and running, TV and Movie libraries are all 100% rebuilt from their pre-HDD failure state. The SAS adapters just arrived yesterday, so I have 3 of the 6TB drives currently pre-clearing; But the final setup is 36TB in array, 14TB as parity for future proofing, 10TB as the download/unpack drive, 512GB SSD for Cache, 500GB SSD for Docker appdata. I currently have 12.5TBish used on the array.

It is living on a sweet little monoprice stand next to my TV because I live in an apartment and thats the only place it fits nicely; It also gets to sit next to my bike.

WARNING: I am not good at cable management, and frankly thats OK. It works and I can see what goes where for drive replacement. 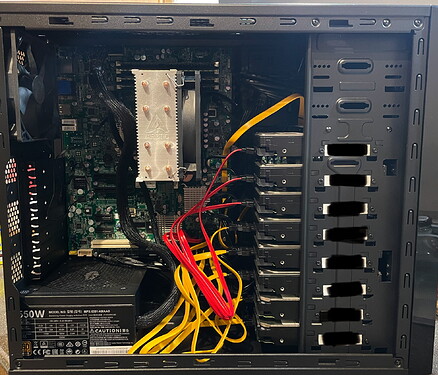 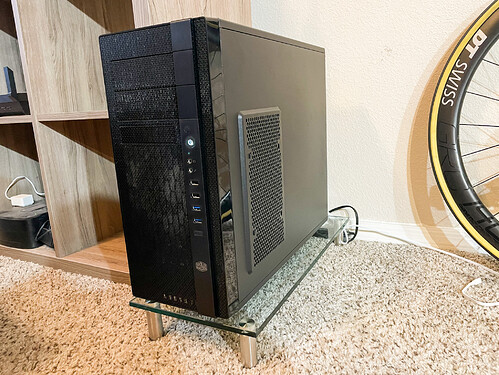 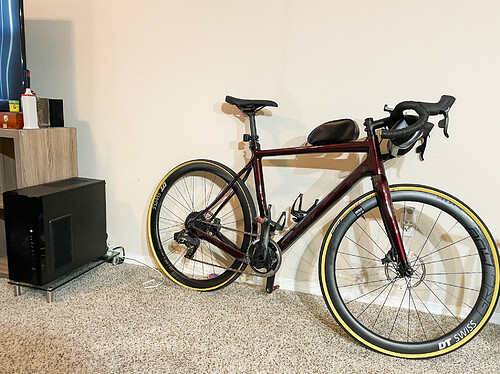 Overall, I am super satisfied with my build and finally moving away from the Mac Mini (which is a great computer, but a bit long in the tooth for server use). I am looking into an HP290 for hardware transcoding, and will probably end up with a DAS at some point. The hope is to move into a house within the next 2 years and get a rack going.

I don’t think I am forgetting anything, as this is my first post here - please excuse any formatting errors.

And thank you for looking!

Thanks for this. I’m likely going to copy your build pretty closely.

Its just to keep the Docker App Data separate from my Cache Pool. I guess theres no real advantage, it just allows my cache to deal strictly with files destined for the Array and prevents the constant R/W to that drive. If you are running UnRaid 6.9, you can just use a separate cache pool for your dockers though.

The guide is here: [Guide] Move Your Docker Image and Appdata to an Unassigned Drive

It is separate from the array, its an unassigned drive. This is just to keep the files I am downloading/unpacking/seeding from being written to the array. First it keeps them off of the cache drive, second it prevents the array from spinning up whenever there is seeding/downloading activity. Also these files are generally short term storage so I don’t need them to be included in parity and I didn’t want to write them to the array and then delete them constantly. I just feel better having a separate drive dedicated to downloads rather than just having a user share for them.

I just map the path to the drive for all the necessary dockers. Just make sure to select the RW Slave option when you do.

Thanks to both of you! That is all really helpful.

Here’s where I’ve landed. Appreciate any thoughts you have, especially if you think I’m missing something or purchasing things that don’t make sense.

I have two freshly shucked 12TB WD drives and will pick up one more to get this up and running. At that point, I should be able to decommission the old HP Z420 and pull the 26TB of drives out of it to add to this new array. It’s going to be 4k movie heaven.

First, I’d skip the Kapton tape and just do the 3.3v mod to your power cables. You just need to pull the backing plate off of the connectors and remove one of the wires, as seen here: SATA power cable mod to remove 3.3v pin cable - Album on Imgur

Second, you should’t need the SSD mounting bracket, the case has one for the SSDs on the backside.

Third, What is your purpose with the SFF-8087 to SFF-8482 and SFF-8087 to SATA breakout cables? You shouldn’t need those unless you are using an additional HBA card as the HBA built into the Tyan board uses normal SATA connectors.

With the 8 HBA ports and 2 SATA 3 ports it works out perfectly considering the case holds 8 HDDs and 2 SSDs, so you shouldn’t need an additional HBA card unless its for a DAS.

Otherwise looks good, I am currently just using the fans that came with the case and haven’t installed any extras. Temps are fine on my end.
Server has been running fine for almost 2 months straight with no issues.

Make sure the first thing you do is disable the BIOS fan alarm and then flash your HBA to IT mode. I used the nguvu guide (and 9211 firmware), but JDM has a guide as well.

@kmarriner - Thank you! Incredibly helpful and saved me about $75, which I really appreciate. I find servers/networks/unraid/plex interesting and know enough to be dangerous, but don’t spend enough time on these topics to know exactly what I need in any given situation. Especially when piecing together components.

@knowles No worries my friend, let us know when you get it built!