This has been in progress about three weeks, thanks to one specific company. I received 2 L4500 in a row with only the L side HDD caddies. First seller was a pain and offered no help, but I don’t believe spoke English well. Second purchase was straight from Amazon and I called them when I got the box open and they got on the phone with Rosewill that night and had the R side rails sent out. I also received a dead RAM chip from an eBay seller that had to be sent back for a refund. 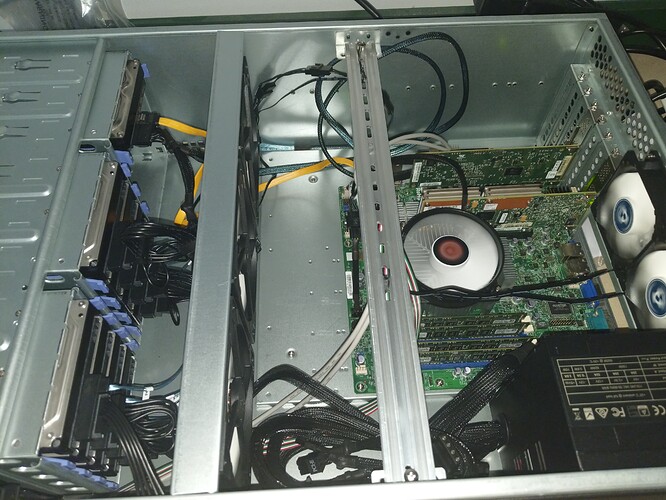 I am running a 1260L, 32GB of RAM, 8x4TB SAS drives and 1 old spinpoint F3 1TB on SATA. The F3 was used initially just to setup all of my Dockers while waiting for replacement RAM and my spinners to come in, and will probably end up pulled. Double parity so 25TB usable right now.

Future plans are to max the case out with these 4TB drives, and await another 7PESH2 style deal to panic buy and start over. Also I need to actually rack it with my 1U pfSense box, some day. Apparently I need to flip the fan wall and all of the 120mm fans. Soon™

Thanks to JDM and the serverbuilds.net team!

How’s your build treating you? Any updates?

I know you’re asking because you know I replaced it already. Maybe I’ll post an update this weekend!

How are you cooling the F80?

Currently I have no cooling on it, it’s temps are fine, but am adding two more. For the new setup I’ll be making an acrylic bracket to hold two 80mm fans pushing air down over them.