Thanks for the site and all of the great advice on getting things going. I’m currently running a couple of drives off a SBC with Open Media Vault, a couple of more on a 2-Bay Seagate NAS and two SBC media streamers. I’m a first time NAS builder here hoping to consolidate this mess and get a media and storage server going for home and external use. So far I’m using:

I followed the video you posted to update the MOBO bios so thank you for that. I used the IMPI webUI to update IMPI firmware. I’d like to complete the updates before I start assembly and I have few questions about how I should proceed.

I’ve downloaded the latest BIOS and firmware for the Aspeed AST2400 BMC, but I don’t know how to find out the version that is currently installed or how to update that. Based on an Asrock web page it looks as though I can update Aspeed bios and firmware through the IMPI Maintenance tab. Does anyone have ideas about updating FW and BIOS for the Aspeed BMC on this Supermicro board?

The SAS2 uses SATA ports on this board so I guess this means I’m limited to SATA drives for these ports?

I’m planning to run Open Media Vault with Snapraid off a thumb drive which was suggested in the OMV forums. It was also suggested to use a separate drive for docker apps, media server and other apps. Does it make sense to use one of the storage drives for the apps or should I be using a separate drive? I noticed the builds also include a cache drive, but I’m uncertain if this is something I would need for my build too.

If anyone has any suggestions for how to proceed or what I should be doing next that would be much appreciated.

I’m wondering about checking my drives before shucking them. Are there any recommended checks or just scan for bad blocks?

P20 is perfectly fine for the onboard LSI SAS.

Updating the BIOS is not super necessary unless there’s a feature that an updated BIOS provides that you need. 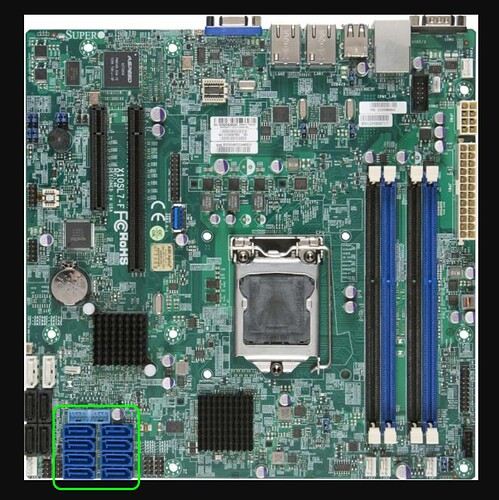 I would highly recommend Unraid over OMV. It’s much easier to use and work with in general.

Great. Thank you for the info on the ports and cabling. I’ll keep looking into the drive options for cache and apps as that would be the likely use for SAS connectors in the short term. From what I understand the HDD drive speed and my 1GB internet are more likely bottlenecks than the SAS vs SATA cabling.

Not sure how applicable this is to my build needs but according to info on this Synology site I’m looking at ~800GB cache drive:

What is the minimum recommended size for my SSD cache? - Synology Knowledge...

Synology Knowledge Center provides you with answers to frequently asked questions, troubleshooting steps, software tutorials, and all the technical documentation you may need.

I updating BIOS and FW just as preliminary to ensure things were OK. The IMPI update was “recommended” and the MOBO BIOS update was “critical”. Everything went fine as far as I can tell. I’ll leave the P20 FW on the LSI SAS controller as is. The Aspeed ASP2400 has security patches in the newer FW which is why I was trying to sort that as well. Not sure how critical these things are but the machine will be exposed to the web, so I’d like it to be as secure and stable as possible.

I was initially going to use Unraid, but then I read about OMV with snapraid and unionfs which seems like a pretty good methodology to me. I’ve been using OMV on a SBC for several years in a fairly basic JBOD manner without any problems. Support seems to be pretty good there too. One thing I liked about snapraid was being able to add populated drives. Since I already have four of those it kind of made sense to me. I’ll take another look into Unraid on your suggestion.

Still waiting for parts to arrive before I start assembly. I’ll keep you posted as I proceed.

Thanks for your suggestions and info.