In my new house, I have a long rectangular family room (approximately 26 feet by 12 feet), with 8 dimmable flush mount LED disk lights, controlled by a pair of 3-way switches at opposite ends of the room. Because the room is so long, we’ve divided it into two separate areas, a TV area on the right, and a game area on the left. Here’s a quick overview of the layout: 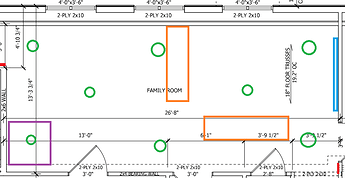 Originally I was just going to throw a couple smart dimmers in place of the switches and call it a day, but as we’ve started using the spaces we realized it would be great if we could control the lights of both areas separately. So now I have to come up with a new idea. These are our current lights: 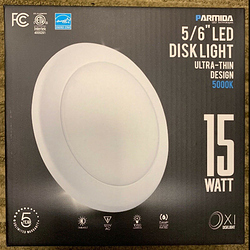 There are no recessed cans above the lights, most of them are mounted to standard round electrical boxes, and one is mounted to a pancake box because of a clearance issue. One thought I had was to add a Shelly Dimmer (https://shelly.cloud/wifi-smart-home-automation-shelly-dimmer/) behind every light, and swap the 3-way switches for a pair of smart switches with scene control. The one light with the pancake box only has a single wire going to it, so I think I can squeeze a Shelly into the box as well. Another option might be to replace the fixtures, but so far I’m not having any luck finding smart fixtures in the same form factor. I’d prefer to stick with the same flush disk style light, so standard A19 smart bulbs are out. Do any of you have any other suggestions? Thanks in advance.

I think the dimmers are pretty much your only option here. I haven’t seen much in terms of smart lights in that many form factors especially small form factor ones like it sounds like you would need.

Only other thing like you said, would be putting in cans to open up your options. I feel like the smart lights just aren’t offered in that wide of an array of options YET.

If money isn’t an issue, you could put aeon micro dimmers under each light, the replace the master switch and slave switches with either the non dimmable micro switches Or, a Lutron casetta switch with battery operated pico wall mount in place of the slave switch.

Then use scenes like you suggest to control half the lights.

Edit: Or you could leave your existing light switches always on in this scenario and add 2 pico remotes(or similar scene control devices) to seperate them, but I’ve found that no matter what you do, a switch will be flipped at some point, and that’s annoying. I know some people use these to mitigate it, but the look isn’t for me.